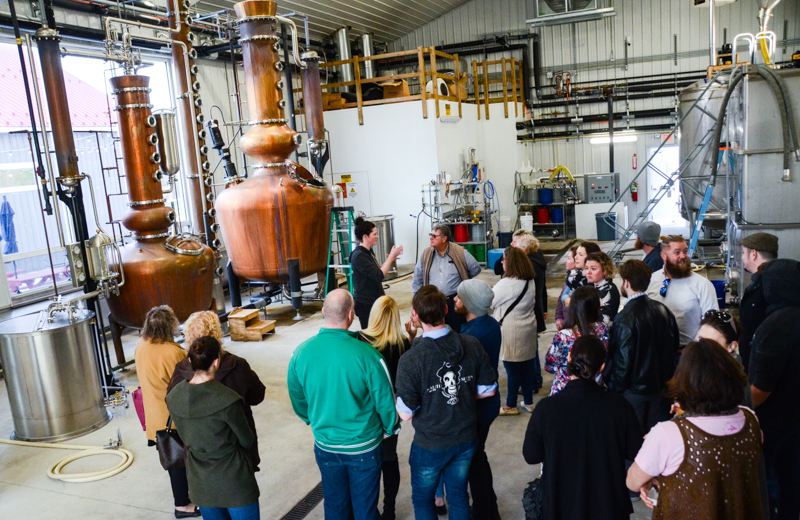 It was a windy evening when we pulled onto the gravel road leading back to Nauti Spirits Distillery, an unassuming cluster of red-roofed buildings a distance from the road. We’d been invited to an industry-only night, and since I’d never visited the distillery since they opened last year, our blog team (consisting of me and Michelle) begged a favor from a photographer slash designated driver (Michelle’s husband) and met our sales rep (Kathleen) there ten minutes to six.

Nauti Spirits sits on a 60-acre farm, and I was reminded of that as we passed a lone draft horse in a pasture standing sentry over the drive. We hurried from the car to the front door to escape the wind, and the first thing that struck me was the smell: sharp and earthy like soy sauce. Inside, the smell was stronger and a little sweet. “The sweet potatoes?” Michelle guessed and we checked in.

I’d only seen the interior of Nauti Spirits in wide-angle photography, so I was unprepared for the actual size of the space. It’s half the depth I’d been expecting, with the bulk of the tasting room taken up by the bar that spans the far wall. The rest is filled with tables, which were laid out with clear plastic cups and pitchers of punch, and a selection of appetizers catered by Cold Spring Grange. 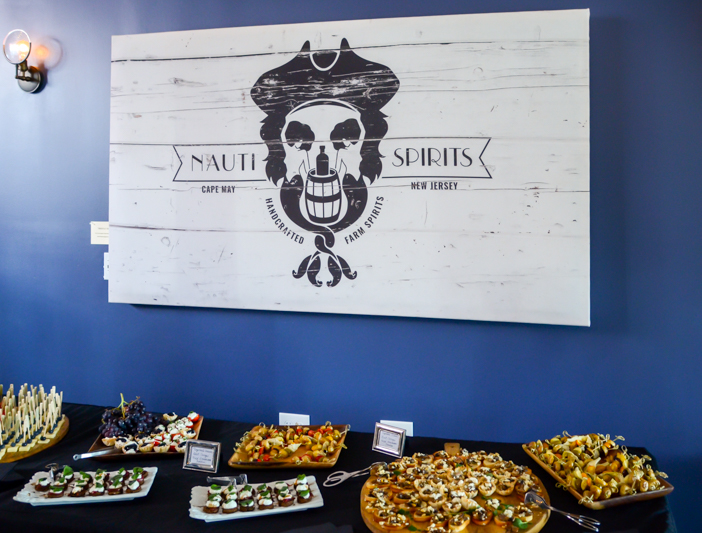 The first punch we tried, Forbidden Fruit, was a rose-colored gin-based punch with pomegranate, pineapple, lemon, and bitters. “I’m not much of a punch fan,” Michelle said, “but that was a really great flavor.” We both finished our glasses. The second, Cast Your Caraway, was made with vodka and carrot juice, lime, and caraway. It didn’t have the punch (ha!) of the Forbidden Fruit, but it grew on me. Michelle only had a sip. A woman walking past who prefers vegetable flavors to sweet drinks told us it’s her favorite.

Since there was time to kill before our tour began, we sampled one of every appetizer (the Grange’s deviled eggs with smoked jalapenos were our favorite, with the the beet and goat cheese rounds coming in second) and Michelle decided to explore the bar menu.

She chose a cocktail for each of us. For herself, she went with the Delaware Bay Breeze, their take on a Sea Breeze, made with their own vodka, fresh lime juice, house-made pineapple syrup, and cranberry. It wasn’t too sweet, with a light and refreshing flavor, though Michelle wished they’d served it in a cocktail glass instead of martini. For me, she picked what Nauti Spirits calls the 2,000lb Dog: a mix of vodka and house-made ginger syrup with bitters and bubbles. In short, it was the finest Moscow Mule I’ve ever had and effectively ruined all other ginger drinks for life.

Understandably, no glass is permitted on the tours, so we had to leave our drinks behind when Veronica Townsend, a young and enthusiastic distiller, gathered us for the first group. We followed her from the tasting room to the rickhouse, passing the farm’s herb garden and an artfully placed white Mustang (for sale by Kindle Auto Plaza, who sponsored the event).

The inside of the rickhouse smelled like a woodshop. We gathered beside a wall of boxed cases of Nauti Spirits vodka, gin, and rum awaiting distribution. Beside them were two rows of barrels containing their newest addition, bourbon. Veronica explained that the inside of the barrels is charred–theirs are a medium char–which is what gives bourbon its color and flavor. After this run, the master distiller will determine what type of wood they’ll use for these barrels going forward; they’re using two this year. 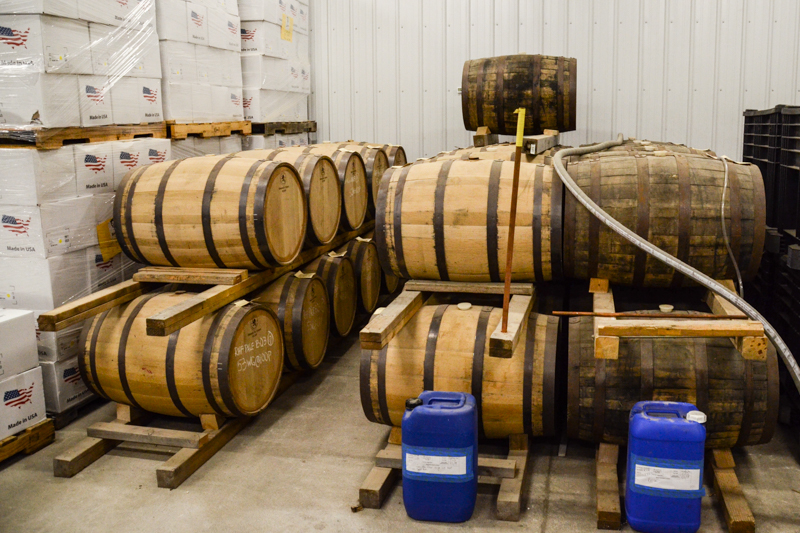 Inside the rickhouse. The two light-colored rows of barrels hold the first run of bourbon | Photo credit: AJ Giorla

The rickhouse also contains the potato washer, where they prep the sweet potatoes that are used in their vodka. Last year, the farm at Nauti Spirits produced 20,000 pounds of sweet potatoes. Sound like a lot? That’s only enough for four runs of vodka. Each run, Veronica said, produces 1,000 to 1,200 bottles. They buy additional sweet potatoes from a farm in Vineland. Nauti Spirits also sources the grain used for gin and bourbon in-state from Rabbit Hill Farm in Shiloh.

From there, we headed to the final stop on the tour, the distillery, which is a large, bright room housing two copper stills (a 750-gallon stripping still used for the first distillation, and a 250-gallon still). Between them is a 20-foot vodka column used for the final distillation. Imagine a copper flute standing on its end with a multitude of viewports in place of the keys, like something out of a Victorian steampunk novel. The room smelled heavily of yeast, and I realized that was the scent that had been hanging over the parking lot. Veronica explained the distilling process and I had a vague flashback to being fifteen in chemistry lab. The room also houses their bottling equipment; they fill and label only six bottles at a time. 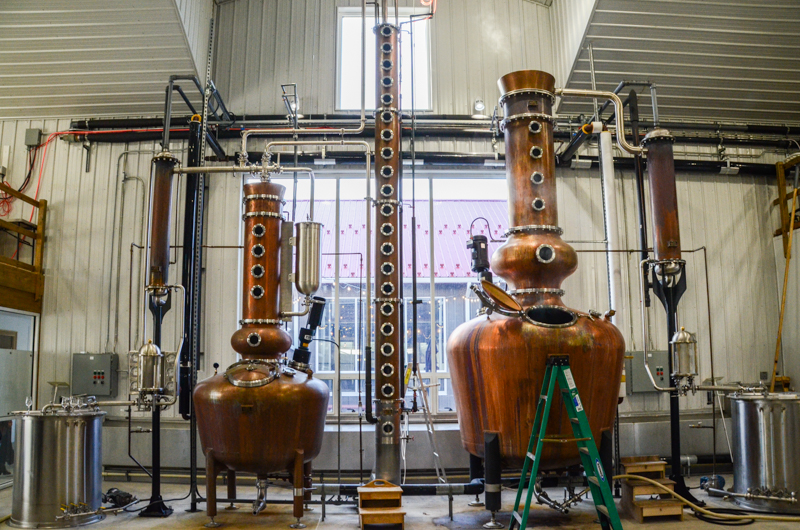 The tour ended through a glass door that led back down the same hallway we’d come through when we arrived. We gathered in the bottle and gift shop, leaning against a counter, and struck up a conversation with Veronica. We asked how long she’d worked as a distiller, since she’d rattled off information about the distilling process like she’d grown up around it. We were surprised to hear she’d only worked in the industry for a year and a half. How did she find the job? “Craigslist!” she said and we all laughed. Although she had no experience and had never even thought about how liquor was made, she was intrigued. What did she do before this? She’d worked at a restaurant and coached rowing. 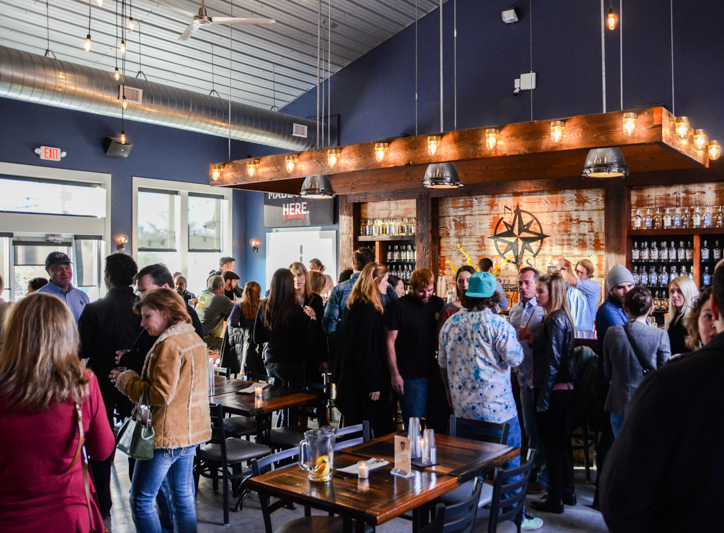 By this point, the tasting room was beginning to swell as people continued to arrive, so we took the opportunity to slip out and head to North Cape May for sushi, but it won’t be our last visit to the farm. Nauti Spirits is open Thursday through Sunday for self-guided and 25-minute behind-the-stills guided tours (yours won’t be catered like ours was, but you can bring your own food). For times and more information, visit nautispirits.com.