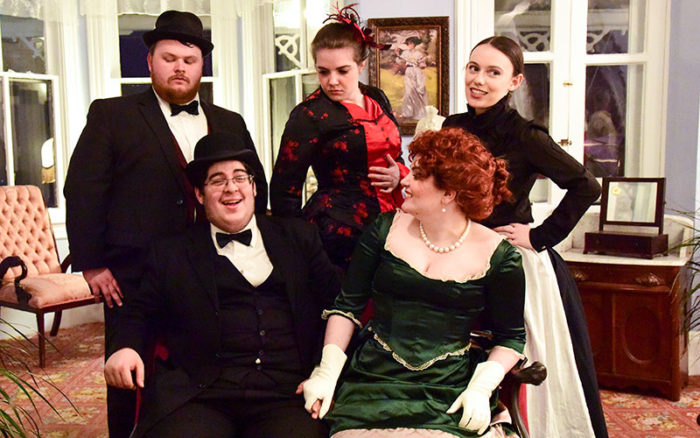 I witnessed a murder at Aleathea’s Restaurant. A murder mystery dinner, that is.

It wasn’t a dark or stormy night. My colleague and I arrived at the Inn of Cape May in fading daylight, on an April evening so warm we didn’t need jackets. We’d come for the opening night of An Evening to Die For, a new murder mystery dinner written by Jacklyn Fazio and sponsored by the Mid-Atlantic Center for the Arts & Humanities (MAC). I grew up on Agatha Christie, fluent in Poirot and plot twists, and was excited to put my deduction skills to work.

We entered through the porch, happy to see that the bar was bustling, and met up with a friend who was joining us for dinner. Our table was in a large banquet room, a four-top positioned next to the wall. There was no stage and no open floor space at the center of the room. There were long tables accommodating large parties, and small tables like ours. We weren’t expected to interact with strangers, which I appreciated.

The Inn of Cape May is a perfect setting for a murder mystery. If you’ve never been inside the hotel, it’s an old Victorian, lovingly maintained but not contemporary. The banquet room was hung with art in gold frames. There were floral curtains over the windows, bouquets on tall pedestals tucked into the corners, and crystal chandeliers. It felt a little like we were in someone’s home.

We ordered cocktails—not included in the ticket price—as we waited for the show to begin. And it did, from the same door we’d come through, when a severe young woman in a maid’s uniform (imagine a much younger Mrs. Danvers) burst in to tell us that the guests of honor would be arriving soon.

An Evening to Die For takes place in four parts, each preceded by one of the meal’s four courses: a creamy tomato soup, house salad with champagne vinaigrette, chicken marsala with vegetables, and raspberry cheesecake. The food was good, filling without being too heavy. The play was similarly entertaining. We weren’t bored, but it wasn’t an emotional drain either. Actors wandered through the dining room, occasionally interacting with the audience—guests at a farewell party for Mr. and Mrs. Albert Richfield, a newlywed couple bound for Paris. Most of the action was concentrated across the room, where the characters often forgot they had witnesses and divulged highly personal information that I scribbled in my program in case I needed it later.

There was laughter. The requisite murder. Screaming! An interrogation. A confession. There was also a lot of whispering at our table as we tried to piece together what had happened and explain, in hastily written detail, why our theory had to be correct. I won’t give away any spoilers—the same performance runs through the year—but we still believe the murderer was framed. We had to console ourselves with cheesecake. Overall, it was a pleasant, lighthearted way to spend an evening.

After the dining room cleared out, we had a chance to sit down with the cast in the hotel lobby. Jacklyn Fazio, who wrote and starred in the show as Mrs. Richfield, was pink-faced and effervescent in spite of her fatigue. The whole cast, in fact, had an energy that surpassed the hour and the restricting costumes. The women were in period dress, with gloves and pearls or high necklines; the men wore suits, bow ties, and hats. Besides Jacklyn, the cast included Ryan Hastings (Mr. Richfield), Alyssa Fazio (the younger sister), Steven Church (the best friend), and Jennifer Hickok (the aforementioned maid). They were young, no older than college-aged, and cheerfully sat down with us to answer questions.

“This is fun,” Jacklyn said, laughing, a point that was reiterated by the entire cast.

“I’ve never died before!” echoed the person who portrayed the victim. And quite cheerfully. 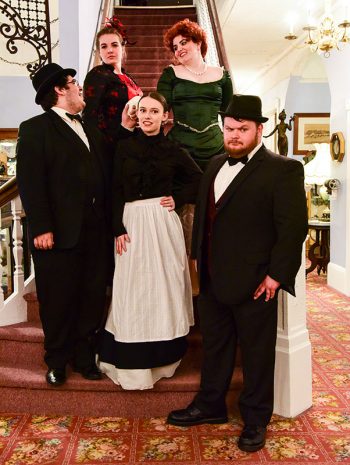 The group has known each other since first and second grade–two of them since birth, since the sisters in the play were played by actual sisters. Half of the cast are students at Rowan University, all of them born and raised in Cape May, all from Lower Cape May Regional theater department (though at different times). It was clear this group of people has not only been friendly for a long time, but that they have a genuine affection for one another.

Jacklyn assembled the cast from friends. They only had three weeks to rehearse before the opening because of work and school (and it was their first performance as a group). But they made do. Because of logistics, they rehearsed via Facetime and blocked the play only twenty-four hours before it opened. In fact, the first time the banquet room’s furniture had been set up properly was thirty minutes before showtime. (The former theater nerd in me cringed on their behalf.)

I asked how they sourced their costumes, and Jacklyn lit up. Beyond being a playwright, she’s also a seamstress, making the two Victorian-style dresses herself and piecing together the maid’s costume. She was especially proud of how they engineered the murder weapon (you’ll have to see for yourself).

The cast clearly had fun performing together, which bled over into the audience. Since the play is immersive, it’s “fueled by the audience,” said Steven Church, who played Mrs. Richfield’s childhood best friend, Dr. Jonathan Von Hustle. “If that guy [in the audience] doesn’t laugh, doesn’t react, the scene dies.”

For the past few years, Jacklyn has written for MAC’s Clueless at the Physick Estate series. She used it as a basis when approaching this show, her seventh murder mystery to date. I asked if anything surprised her while she was researching the Victorian era.

“The gruesomeness of Victorian-era medicine,” she said. An injury that would’ve been fatal during that time would be survivable with today’s medicine.

There aren’t any, Jacklyn confided. She’d originally planned for the play to have a sixth role, but she wasn’t able to find another cast member. She revised the script to suit five characters for the five actors, and those five will perform it throughout the season.

“But what if something happens?” I said, conjuring nightmare scenarios.

Steven delivered the punchline. “The show must go on.”

An Evening to Die For will be back October 6, 7, and 20. Tickets are available at capemaymac.org. And if you’re in the mood for intrigue sooner, check out Clueless at the Physick Estate, which runs Tuesdays and Thursdays throughout the summer.

Tags: Aleathea's, Cape May MAC, Inn of Cape May, theater