I’ve been working in Cape May for seven years and had never eaten breakfast at Dock Mike’s until recently. A Sunday in early September was the morning for me. I wanted pancakes and bacon! My husband and I drove into town and found a spot in their parking lot, which was about full. As we walked past the line of people waiting, the flowers were in full bloom and the wind was whipping the “open” sign around. We expected a long wait time because the deck was packed, but it was only twenty minutes, and they were able to seat us right away inside.

If you like pancakes, Dock Mike’s — which has been flipping pancakes since 1988 — has you covered. They have twenty varieties, from buttermilk to pina colada. In addition, they serve waffles, French toast, eggs, and omelettes. Our server was Desiree Matthews (aka “Flash” because she was flying around the tables). She got us coffee and took our order. She walked so fast that when she brought out our order, I had to ask her to slow down so I could take her picture. She laughed and said absolutely.

We’d both ordered the buttermilk pancakes. I stole half of my husband’s bacon because that’s what I do. The three pancakes were fluffy and the bacon was crispy. You know how at some places, the bacon is either floppy or cut so thick you worry about breaking a tooth? Well, this was the right thickness—not too thin and not thick. Perfect.

Another thing I noticed at Dock Mike’s is cleanliness. I’ve been to plenty of places where the syrup bottle is so sticky, you end up sticking to it. Then your napkin sticks to you. Not here! Everything on the table was wiped spotless. Even the mirrors beside our table were clear. Impressive. And Desiree was an A+ server, extremely polite and professional.

Dock Mike’s Pancake House is located at 110 North Broadway in West Cape May and has free parking. They’re open daily in-season for breakfast and lunch. Just remember they’re cash only, but they have an ATM on-site if you need it. 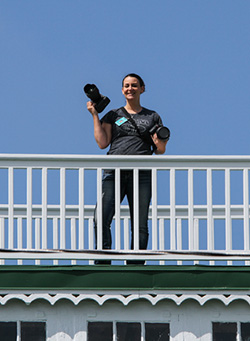 Michelle is the staff photographer for CapeMay.com and Cape May Magazine. On the weekends, she loves to ride her Harley, do crafts, and bake.