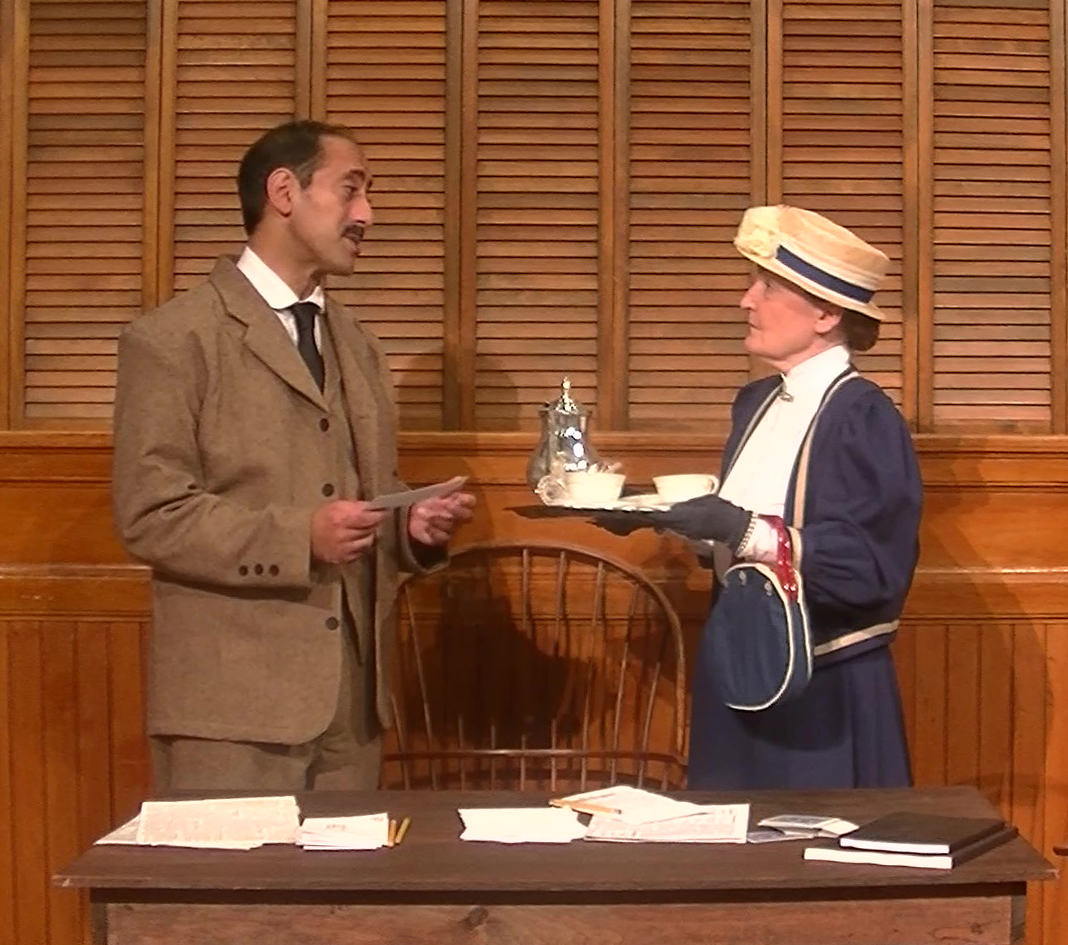 NOTHING MATTERS is available from Monday, April 12 through Sunday, May 9, every day at 8:00 PM.

Tickets are free or pay-what-you-will (minimum $5) and may be obtained at www.tinyurl.com/bierce-tix.  The link to watch the show is sent via e-mail by Ticketleap, through which the ticket was obtained. Any problems, call ELTC at 609-884-5898 or e-mail eastlynneco@aol.com. You’ll have 24 hours to view NOTHING MATTERS, and you may pause and even stop the show and return later. ELTC strongly recommends that you connect your computer to a flat screen TV with an HDMI cable so you ​can see the show ​on a larger screen with better sound, and even use Closed Caption if you like.

“Once again, ELTC brings a historical figure to life who may otherwise fade away. NOTHING MATTERS is timeless and timely – a tribute to writers who protect the truth and stand the test of time. James Rana as Bierce is genuine and passionate. . . Amanda is played with brilliant rapport by Gayle Stahlhuth.” – Tom Sims’ Review in EXIT ZERO (fall 2020)

East Lynne Theater Company presents NOTHING MATTERS, a two-person play about one of the world’s greatest writers, Ambrose Bierce.  ELTC received the fourth AEA contract in the country since the shutdowns began in March 2020 to create this fully-staged production, with no audience.  Filmed with three cameras and edited, it originally ran in the fall of 2020. Written by Dave Geible, it stars Broadway actor James Rana, with ELTC’s artistic director, Gayle Stahlhuth, who also directed.

The setting is Ambrose Bierce’s room at the Army Navy Club in Washington D.C. in early July, 1898.  Seeking Bierce’s advice on how to be a better writer, Amanda Wentworth intends to merely drop off samples of her poetry, but ends up having tea and learning a great deal about the fascinating journalist who worked for William Randolph Hearst, along with other newspaper publishers. Bierce’s philosophy was “Nothing Matters,” but of course, many things mattered to him.  He was known as “the wickedest man in San Francisco” because he pursued the truth no matter who was the target of his journalist wit and humor. Having fought in the Civil War, his stories based on the experience are especially poignant, and “An Occurrence at Owl Creek Bridge” is considered by many scholars to be one of the best short stories ever written. His most famous book, “The Devil’s Dictionary,” was named one of “The 100 Greatest Masterpieces of American Literature” by the American Revolution Bicentennial Administration in 1976, and “Wall Street Journal” columnist Jason Zweig wrote that it is “probably the most brilliant work of satire written in America. And maybe one of the greatest in all of world literature.”

ELTC premiered NOTHING MATTERS in 2000 before playwright/performer Dave Geible took it on the road with The Wyoming Shakespeare Company. Geible has revisited the script for this current production.

James Rana, actor/playwright, has performed with theaters throughout the country, including ELTC, and in film and television. In 2017, he performed in Off-Broadway’s THE GOVERNMENT INSPECTOR starring Michael Urie. In the fall of 2017, he began rehearsals for Broadway’s THE BAND’S VISIT, and performed several times in the role of the Band’s Leader, originally played by Tony Shalhoub, and other roles.  When this Tony Award winning show closed on Broadway in April 2018, he began performing in The National Tour.

Gayle Stahlhuth has performed Off-Broadway, in regional theaters, and in film and television.  Since 1999 she has been Artistic Director of ELTC, producing over 100 different plays and musicals for this company, and directed most of them. Her work has been praised in “The New York Times,” “The Wall Street Journal,” and “The Philadelphia Inquirer.”

NOTHING MATTERS is dedicated to the memory of ELTC’s technical director and stage manager, Lee O’Connor, who lost his battle with cancer on March 21, 2021.

Read CapeMay.com’s review of Nothing Matters on our blog