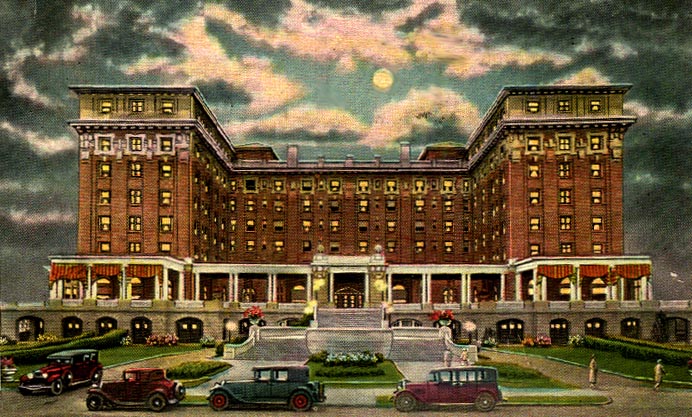 “Lot for Sale” signs dot the landscape today like headstones in a graveyard. Most bear another message as well — “sold.” Four houses already face the beach. Homes of fine proportion with grand views. Summer houses. Cottages, they’re modestly called in Cape May. 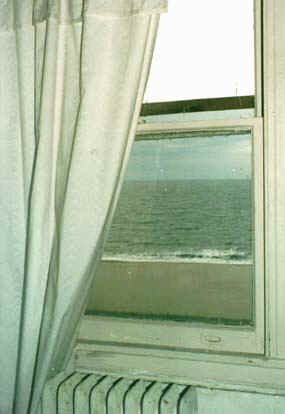 View from one of the Admiral’s windows.

But there’s an eerie vacancy to the scene, too. One can feel it in the air. There’s an immediate coolness, a sense of void.

“You’re watching history go away, kid,” an unidentified one-armed man wearing a Vietnam veterans’ jacket tells the little boy standing next to him. It is Monday morning, February 26, 1996 — a cold and damp day in Cape May — but one that will live in memories for years to come. A day generating countless tales future generations will have to hear, and bear, again and again.

In a town whose very existence depends on its historic buildings, the loss of one from fire, much less demolition, is felt intensely. The Christian Admiral Hotel was like a living, breathing member of the community and her passing was mourned as such.

This morning demolition is slated to begin, though no one knows for sure if it will.  The razing had been halted the previous week because of weather conditions. Still, spectators line the beach front well before 8 a.m. determined to witness the making — and unmaking — of history.

Though some bring video camcorders and most carry cameras, few are here simply to ogle. Memories have brought them to watch, wait, share stories and even shed a few tears. Personal recollections of days gone by and the moments when the old hotel touched their lives.

Built between 1906 and 1908, the same years as the ill-fated ship Titanic, her soul and destiny were much the same. She was a brick mammoth boasting 333 rooms and touted as the world’s largest hotel when she opened April 11, 1908.

Her lobby featured a glass-domed ceiling much like that aboard the Titanic, and a staircase also reminiscent of the great ship bending in two directions as it led visitors to the upper levels.

Now, the Christian Admiral is sinking too, literally being pulled to the ground by large cables that wind around exterior walls of the building and connect to small bulldozers.

The crowd is quiet. Many drink coffee while talking in hushed tones, a sense of camaraderie begins. “Have you heard anything? Are they going to do it?” everyone asks each other. As coffee runs out and the cold sets in, many are hesitant to leave in fear of missing something. The waiting — and the stories — continue. 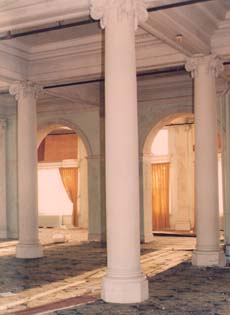 Both the Titanic and the hotel were designed to cater to the wealthy, the Christian Admiral, or Hotel Cape May as she was first called, was an intricate part of the 4,000-acre East Cape May Project initiated by wealthy Pittsburgh steel magnates in hopes of creating another Newport, Rhode Island.

Besides the hotel, yacht clubs and golf courses were to be built and “entertainments” as posh as Newport available. A harbor was dredged, trolley tracks laid and stately homes, including that of project president Peter Shields, built in Cape May’s then-remote eastern section.

The hotel itself cost $1 million to build, and from the moment ground was broken, judgment seemed passed — the project was doomed.

Trouble started when the construction workers, amidst racial tension, went on strike within the first six months on the job. Small riots, and even the sabotage of a trolley carrying African-American workers to the construction site, brought work to a standstill. The hotel opened two years behind schedule.

Despite setbacks, the grand opening celebration was magnificent. Cape May’s local newspaper, the Cape May Star and Wave, reported the event to its readers stating, “One of the greatest events which has ever occurred at Cape May is the formal opening of the million dollar Hotel Cape May. It undoubtedly will stand in all future time as an incident marking the beginning of a Greater Cape May, which thus embarks upon a career of upbuilding (sic) and importance which will make all past history of the resort pale and insignificant.”

It was, perhaps, the hotel’s finest hour — many guests danced to small orchestras in the hotel’s grand ballroom as others strolled the wide beach front verandah watching Henry Ford and Louis Chevrolet race their newfangled “auto-mobiles” on the sands of East Cape May’s beaches. 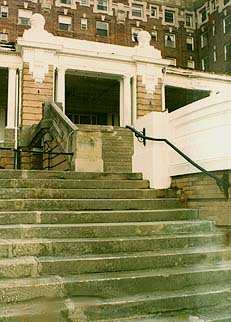 One year later, the East Cape May Project was in financial ruin. Peter Shields quit and the project declared bankruptcy. In 1910, the new president Frederick Feldner, and a major stock holder were killed instantly when their auto-mobile was hit by a train at a nearby railroad crossing.

Nelson Graves, a wealthy Philadelphia manufacturer, took over the project and temporarily revived East Cape May and the hotel offering guests a major convention center, improved trolley lines and an amusement park.
In 1914, Graves too declared bankruptcy.

During World Wars I and II, the hotel was used as a military hospital. Postcards from both wars depict her grand halls housing ward after ward of gravely wounded soldiers, nurses at their sides.

Ralph Cornwell stands waiting among the spectators with his wife, Madeline. He remembers being treated here during World War II. “It’s a real shame,” he mutters as he shakes his head and turns away from the spectacle for a moment. His wife, too, remembers the treatment Ralph received here… and other moments when the building served as a hotel and she would have dinner in its Corinthian Dining Room.

After the First World War, the building was purchased by one Frank Schroth who ran it as a hotel until 1931 when he sold it to the Admiral Hotel Co. — for $128,000. Renamed the Admiral Hotel, it wasn’t very long before Schroth’s hotel, too, failed to succeed.

On August 16, 1940, the City of Cape May bought the building at a sheriff’s sale for just $900. The Pennsylvania Company bought it later that year and sold it in October of 1957 to the Masefield Corporation for $142,000, who subsequently declared bankruptcy. In March of 1962 the First Pennsylvania Bank and Trust Company purchased the building at yet another sheriff’s sale for $66,000.

By October, the building was sold again, this time to Reverend Carl McIntire’s Christian Beacon Press — purchased for $300,000 in an effort to save the structure from demolition. Again renamed, the now “Christian” Admiral operated from 1962 to 1991 as a bible conference hotel. It was during the 1980s the building began to age and deteriorate. New building codes forced the changes in the hotel she would never recuperate from. Its last owner, Curtis Bashaw, McIntire’s grandson, grew up in the hotel and remembered her in a 1996 issue of the Cape May Star and Wave — 88 years after the grand opening article. 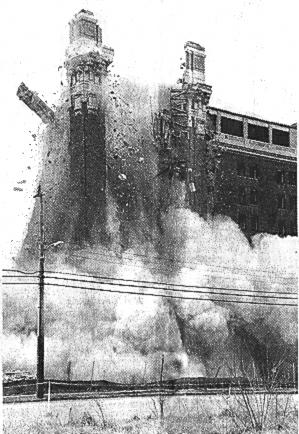 “First it was the transoms — those lovely glass windows above the doors that tilted into the room. They had to come out, replaced by pieces of metal. Then the doors had to have sheet metal tacked on the back, either that or be replaced by metal fire doors. Then the gorgeous stairwells had to be enclosed, the long corridors shortened and the old fire towers enclosed,” he wrote.

“One thing led to another — code upon code — none of them unexplainable, but nevertheless closing up the place.  And so the story becomes modern and more familiar. There were operating realities and enormous expenses that just couldn’t be eliminated. Rehabilitation costs were in the tens of millions.”

The reality of the situation by the mid-1990s, as Bashaw saw it, was like coming to terms with a terminal illness. The Admiral was dying, time had passed it by. “After accepting the inevitable, everything became easier. Instead of trying to make that dear, tired edifice something it wasn’t, we just embraced each other. And with that there was peace.”

This fateful day in February, hours have passed, and suddenly the crowd of resolute onlookers notice something is happening. An expectant hush befalls the crowd. Even the dog who has been merrily playing fetch, hesitates and stops, noticing something is up. As the cables are connected to the bulldozer, a man mumbles, “This is it, this is what we came here for.”

Anticipation mounts and workers spew from the building toward the spectators warning, “The bricks are gonna fly. Move back. Keep moving back.” Then they, too, turn to watch. 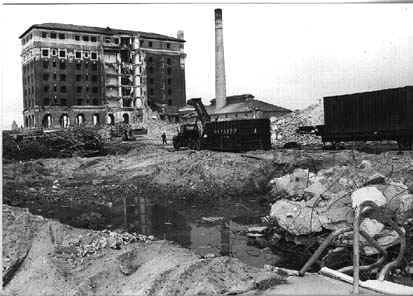 A small bulldozer starts to tug, groaning forward as the building grieves a distinctive creaking and moaning sound, hesitant to fall, as if fighting her inevitable end. Seconds tick by as the creaking and moaning continues and then, suddenly it happens, the walls give. Each member of the crowd reacts differently.

As the bricks hit the ground and a huge wall of dust begins to rise, some witnesses shout, others are silent, people grab unto one another, and one woman is left on her knees laughing an odd, uncontrollable, laughter.

A wall of dust descends the area. As it swells, visibility is totally obscured. People close their eyes from the dust and then are hesitant to open them, minutes later, to see what is left — or not — of the Christian Admiral. The east wing has vanished, and the show is over for the day.

Work continued until April when the last brick fell and the Hotel Cape May — a.k.a. the Admiral, a.k.a. the Christian Admiral — was no more. Thousands of spectators watched week after week, dogged in their vigil of being by her side when she died — for when a long-standing member of the community passes, the whole village mourns.

Tags: The Christian Admiral, This is Cape May