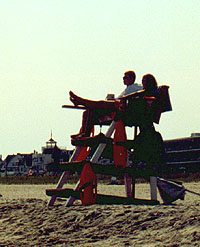 At the peak of the summer season, over 50,000 people visit Cape May and most of them spend some time on the pristine beaches to swim and cool down in the Atlantic Ocean. These bathers in Cape May are carefully protected seven days a week, seven and a half hours a day by the dedicated, professional staff of the Cape May Beach Patrol.

As early as 1845, rescue ropes were hung on the bath houses of the original Congress Hall in an effort to provide some measure of safety. Today, the Cape May Beach Patrol operates 24 lifeguard stands, a score of row boats, a motorized rescue boat, a wave runner and two 4WD vehicles to protect the 2.2 miles of bathing. The patrol is on the beach from Memorial Day in late May to the second weekend following Labor Day in mid-September. But just who are these athletic people, dressed in defining red and yellow, sitting seven feet above the beach? Individuals who become lifeguards must be both physically and mentally strong. Typically, guards are outgoing and social and enjoy the camaraderie of working together for a common interest. 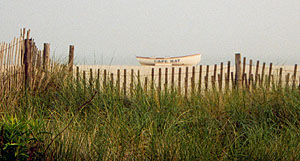 The minimum age for a lifeguard in Cape May is sixteen. There is no specific retirement age; but each season, every returning guard must pass a re-qualification test. No matter what age or how many years you have been with the patrol, you must be able to swim 500 meters in under 10 minutes, no exceptions. Like other ocean front communities, Cape May relies on summer visitors for some of their lifeguard staff; but unlike other towns, Cape May also has a solid core of resident guards. Cape May’s “self- supporting infrastructure” and higher year-round population offer the guards here more incentives than neighboring towns like Wildwood, Stone Harbor or Avalon.

The majority of Cape May guards are in school during the winter months, either taking classes or teaching. Other guards spend their winters doing construction or carpentry work; still others, like CMBP Lieutenant Jim Wadlow, lifeguard year-round.  Wadlow travels to Hollywood, Florida to lifeguard in the winter because, “there’s no other job that will pay you to workout and keep in shape… and the winters in the Northeast can be a bit brutal.” Lifeguards endure rigorous training before climbing up on a stand to assume responsibility for the lives of countless vacationers. 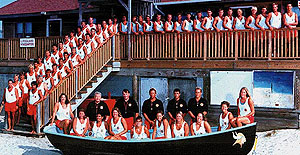 These physical tests are then followed up by an personal interview. Once a candidate passes these tests, the physical stamina must continue. 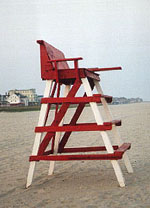 A typical day on-the-job begins at 9:00AM with a scheduled daily workout. Depending on the weather, workouts could be a 2 mile run, 1/2-mile run with a 1/2-mile swim, or a longer swim. Roll call is at 9:30 when guars are given their beach assignments and go over the expected routines for the day. Upon arrival at the stand posts at 10:00AM, drills at various beaches commence. Regular patrol duty is from 10:00AM till 5:30PM. Because the Cape May Beach Patrol is a true team effort, bonds between guards that start as simple camaraderie often grow to be life-long friendships. A large population of the guards work eight hours together, share a house, go out at night and do it all again the next day. Lieutenant Jim Wadlow says “when you work in a team atmosphere of relying on your partner and other patrol members for your own personal safety and the safety of others, you respect each other more for the job you do.”

The present Cape May Beach Patrol numbers 75 guards. Of these a very high number return to the patrol, year after year. The reasons include dedication, camaraderie, a passion for the shore life or simply a spirit of wanting to help and protect.

Some people are just “born to the beach.” Jim Wadlow is one of those people. He became a lifeguard because he “loves the beach.” Looking back he recalls a childhood spent largely at the beach. The idea of getting paid to be there on duty as an adult grabbed him and never let go.

Over the years, Jim Wadlow has made rescues and seen the absolute look of terror in the eyes of the victims in near drowning situations. Jim says others may think life guarding is an easy job of sitting in the sun and “watching girls” all day but according to Jim, “if you do this job long enough, you will truly save someone’s life. It’s inevitable… and knowing you helped someone is a satisfaction that is hard to come by in most jobs.”

Two of the greatest concerns specific to Cape May for Jim and the patrol are rip currents and strong lateral currents. Jim recalled a particular instance when a woman was pulled out to deep water by a rip current and was not aware of how to fight the force or water. She tired quickly and began to panic just as Jim came to rescue her. The following day she returned to the beach to hand him a card that read “thank you for rescuing me, you saved my life!” As Jim Wadlow says: “To know you helped them validates your job.” And you keep on coming back.

TO CAPE MAY VACATIONERS:
Beware of Rip Currents

Rip currents are a consistent threat for shore swimmers. Easily identified from the beach, rip currents appear as “rough water” that rushes in and out from the beach. It’s always smart to stay away from these areas. Water rushing in and out from the beach is most commonly described as a “river” in the ocean. If you happen to get caught and feel yourself being pulled out to sea quickly, do not panic. React by swimming parallel to the beach until you are out of the current.Then attempt to swim in. Remember to swim near a lifeguard and always pay attention to your surroundings.