“The ravages of fire can scarcely be appreciated from a pen description. Where on Saturday morning stood thirty-five acres covered with magnificent hotels, gems of cottages and thousands of bath houses is now a blackened waste, swept by the besom of destruction, leaving nothing in its wake but spectre chimneys and smouldering ruins.”
— Star of the Cape Newspaper, November 14, 1878

What began as a simple boarding house soon grew into a reputable hotel under the direction of Colonel Henry Sawyer. He was a local hero — it was said that every man, woman and child in Cape May could recite Sawyer’s “Lottery of Death” story by heart.

Sawyer served as member of city council for nine years and was superintendent of the United States Life Serving Service — the forerunner of the United Sates Coast Guard — and a member of the New Jersey State Sinking Fund Commission.

By 1878, the boarding house had more than doubled in size and Sawyer had added a belvedere, or cupola, to its roof.

On the morning of November 9, 1878, as was his morning habit, Sawyer climbed the belvedere’s steps to take in the rooftop view of the small city.

It was from here, history has it, that Sawyer noticed smoke pouring from the roof of the Washington Street’s Ocean House. Sawyer sounded the fire alarm, but the damage was done.

It was Cape May City’s most disastrous fire — burning a total of 35 acres.

Southern visitors continued to enjoy the resort. Cape May’s location — just south of the Mason-Dixon line — made it an obvious choice for the wealthy vacationers of states like Maryland, West Virginia and Virginia. And Henry Sawyer catered to them all. “Colonel Henry W. Sawyer, for many years proprietor of the “Chalfonte” hotel at Cape May City, dropped dead in Marcy & Mecray’s drugstore at Cape May on Monday afternoon last.

Col. Sawyer was prominent in Grand Army circles, not only in South and West Jersey, but in the State Department as well. Colonel Sawyer fought in the war of the rebellion, and was recognized as one of the bravest soldiers that ever entered a battle. One of the most stirring incident of his life, and one which the Colonel loved to talk about, was his capture and confinement in Libby Prison, and his subsequent sentence to be shot to death, he having been the unfortunate victim of the drawing in the ‘Lottery of Death.’

The late Colonel H.W. Sawyer was buried on Thursday of last week with civic and military honors, at Cold Spring Cemetery, Cape May. The funeral procession, which was a mile long, was the largest ever known at this end of the State. Rev. J.M. Cockins, Pastor of the Presbyterian Church, made an address on the public services of Colonel Sawyer. Masons and war veterans escorted his remains to the cemetery, where the impressive service ended with a volley of musketry, the roll of muffled drums and the bugle call ‘taps.’”

By 1900, the hotel was one of Cape May’s most prosperous. A menu found hanging inside a fire wall reads: “H. Cresse, Proprietor Tonight’s Menu:
Oyster Soup, Cream of Pea Soup, Prime Ribs of Beef, Boiled Ham, Baked Stuffed Veal, Boiled Cabbage, Baked Tomatoes, Pickles and Peach Cake. Tickets available for the evening’s Cake Walk.”
Hannah Cresse ran the hotel until 1911 when she sold it to Rose Satterfield. Mrs. Satterfield was from Richmond — the very town that sent Sawyer home a hero.

It was tragedy that brought Rose Satterfield to Cape May. Her daughter had drowned in the James River. The same river that ran right behind Libby Prison. Fleeing Richmond memories, she came to Cape May.

She worked at the Baltimore House — one of the four to survive the 1878 fire. When the Chalfonte came up for sale in 1911, Rose decided to buy it. According to family history, Rose “liked” to work. She didn’t have to — the Satterfield family was one of Richmond’s most affluent.

The hotel stayed in the Satterfield family until 1978. Even today, the Satterfield clan gathers annually at the hotel for a reunion. In fact, many families returned year after year making the hotel a familial gathering place. Known for its southern hospitality and graciousness, the Chalfonte was home away from home, a place to relax, for many generations.

Hotel employees were blacks from Virginia and North Carolina. Entire families worked in the hotel, and they too, in a sense, became extended family.
Clementine Young worked at the hotel for 60 years as head chambermaid. Her daughter, Helen Dickerson, ran the kitchen. And Helen’s children — Dorothy Burton and Lucille Thompson — are there today, working in the kitchen as their now deceased mother had for more than 40 years.

Happy memories touched by a hint of sadness and humored exasperation radiate from the eyes of Mrs. Calvin Satterfield.

“Those were the best picnics evah,” Mrs. Satterfield tells CapeMay.com from a porch overlooking the Chalfonte. “And we were evah so careful about the fire and cleaning up. But the city made us stop because of new rules and regulations. It was so sad.”

Calvin spent his childhood summers in the hotel. Before World War I, his winters were spent in Pinehurst, North Carolina, where his father — Calvin, Junior — ran another establishment named the “Chalfonte” — in honor of his Cape May hotel.

“I went to school in Pinehurst during the winter. School would end in early May there. I’d come up heah and have to attend another month,” he laughs.

The Satterfields have four children and 12 grandchildren. Recently, two daughters bought nearby summer cottages so they could still eat and “participate in the life” of the old hotel.

And life is has today.

"My rites of passage were not when I turned seventeen or eighteen years. The thrill of my life was being let into the room where Calvin Satterfield told his jokes. I knew I had come of age." — Anne LeDuc

It is Cape May’s oldest hotel of continuous operation. Anne LeDuc bought the hotel in 1978 from Mary “Mimi” Satterfield who ruled with an iron thumb.

“It was the 1960s and the hotel staff went on strike. Henry, the bellhop, had stahted it all. Ms. Satterfield was not to be outdone. She ignored the employees and set her family and the guests to work. I changed beds for half a day, and nearly broke my back.”
Anne’s mother was from Lexington, Virginia. Her family knew the Satterfields and would vacation at the Chalfonte. Anne told CapeMay.com she’s been coming to the Chalfonte since she was two years old.
“I remember running down the porch and hiding under it. And during college I worked here,” Anne said sitting on the very same porch during an interview. “In the early 1970s, when Mimi turned 80 years old she wanted to sell. The person interested in buying it wanted to turn it back into a boarding house. I was afraid that would ruin it, so I took that as a chance to manage the hotel for Mimi.”

At that time, Anne said, the rooms were painted an “institutional pea green” and there was only one double bed in the entire hotel.

By 1978, Mimi wanted to sell again. This time, Anne found a partner interested in preserving the Chalfonte.

“Judy Bartella is an artist from Lexington, Kentucky. She quickly fell in love with the place,” Anne said.
Together, they managed to purchase it. “My lawyer warned me I was buying the hotel for emotional reasons, and to take a long look at finances,” Anne said.

“Buying the hotel from Mimi was like buying something from your mother. She kept pushing the paper across the table at me. And the lawyer was right, by the way,” Anne laughed.

After mortgaging her own house, Anne set up “work weekends” offering volunteers a place to stay in exchange for manual labor and substantial improvements were made to the hotel. Anne and Judy also began preservation programs with the University of Maryland’s architectural department. Each spring and fall, students exchange 10 hours of work for a seashore retreat. 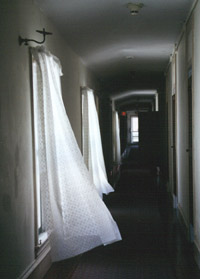 The hotel’s cultural and historical integrity remain the heart and soul of the Chalfonte.

“In the 1940s and ’50s, the staff was all black. They were real gentle folk. The hotel was the epitome of graciousness. That’s what set its ‘tone,'” Anne said. “I try to talk to everyone who comes here, especially those from Richmond. How to keep up cordiality with hard-core business is our current challenge.”

The hotel is not heated, nor air-conditioned. There are no telephones or televisions in any of the rooms. There are, however, ceiling fans, marble-topped dressers and many original furnishings. The hotel offers cultural activities as well — theater, opera, concerts, classes and children’s events.

“We’ve upgraded rooms on the second floor,” Anne said. “And we’re looking at adding some private bathrooms. That’s our dilemma now. And we need to replace the roof. We have short-term goals and long-term goals. The important thing is to retain the ambiance. With the old and the new, it’s a pack of challenges today.”

As if on cue, a man approached Anne. “Are you Anne?” he asked a bit timidly. “I’m from Richmond,” he continued. “Yes,” said Anne enthusiastically. “I saw your name in the guest book. I’ve been meaning to meet you. The Satterfields are here, you know, for their reunion. So it’s been a bit hectic.”

The man is obviously taken with Anne, and the ambiance of the hotel. “Can I call you Anne?” he asked even more timidly. “My mother’s name was Anne.” He has the same slow drawl of the Satterfields.

“Can I take your picture?” he asked, a bit more encouraged.

“I just wanted to tell you how much I love this hotel,” he continued. “It’s history and its feel. It’s my first trip here.”

“How did you find us?” queried Anne.

“On the Internet,” he said.

“It was the one evening of the summer everyone looked forward to. The hotel staff, the guests, and the high-browed Richmond owners.

Theodore Jackson, the black bellhop, would lug pounds upon pounds of lobster, clams, corn, and hot dogs to the beach where they would be cooked over an open fire.

The children loved the hot dogs, of course. The adults would languish in the soft evening ocean breeze near tables laden with fine china, lace tablecloths and freshly roasted seafood. Cocktails were served and games played on the soft Cape May sands.

Away from the daily rigors of hotel life, it was the time all could enjoy.”

— Mingled Memories of Owners and Staff

Tags: Historic Figures, This is Cape May