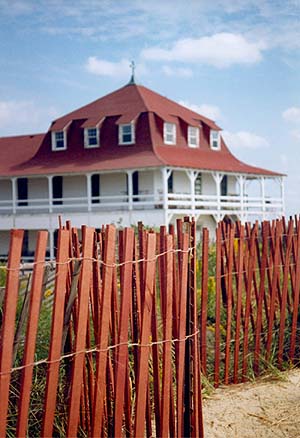 A woman sits in a chair on the covered porch, taking in the salty sea breeze as I approach.

Soon I am introduced in the retreat’s lobby to Sister Ann Raymond, director of St. Mary’s-by-the-Sea.   A piano rests near a statue of Saint Joseph, the carpenter. The main sitting room, a library with a variety of books, is very quiet, the only occupants are a few quietly chatting nuns.

We walk into the dining room at St. Mary’s-by-the-Sea (Cape May Point) and Sister Ann notes the Irish flags decorating the tables. She explains today’s theme for the women on retreat is Ireland. To punctuate this, an Irish jig plays while the women teach each other traditional Irish dancing.

The room we are in was once a dining room long before these nuns occupied the building.

St. Mary’s-by-the-Sea, a summer retreat for the Sisters of Saint Joseph of Chestnut Hill, Pa. and for lay women of other denominations, sits in Cape May Point, two miles south of Cape May, in the shadow of the Cape May Lighthouse. Before the Catholic Church entered the picture, the building was an up-and-coming resort hotel and a home for invalid African-Americans.

The sisters here today, not donning their traditional habits, could be mistaken for, well, anybody.

Formalities are put aside. This is a retreat, a time for enjoyment and reflection.

Sister Raymond tells me the retreat is open to Catholics and non-Catholics, women ministers of other denominations and lay women. The all-volunteer staff is comprised of sisters and lay women as well. 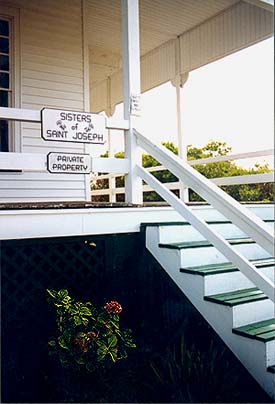 St. Mary’s-by-the-Sea offers directed retreats, a one-on-one encountering where a director meets with participants every day for prayer and spiritual companionship. The center also offers guided retreats where groups meet for private prayer and talks with the director.

“It’s like a vacation. We have a more relaxed schedule. We usually have a later Mass followed by brunch and supper in the evening,” Sister Raymond says.

The building has beautifully landscaped beachfront grounds, a chapel, a dining area and library.

Sister Raymond says retreats begin in mid-June and end after August. Without heat, the building closes in the winter months.

Before the nuns arrived, the building was the Shoreham Hotel, in Cape May Point, formerly Sea Grove.

It’s ironic that the hotel later would serve members of a religious order, for Sea Grove began its life as a seaside religious community, founded by a group of Presbyterians in 1875, whose Sea Grove Association wanted to “furnish a moral and religious seaside home for the Glory of God and the welfare of man, where he may be refreshed and invigorated, body and soul, and better fitted for the highest and noblest duties of life.”

The first building in Sea Grove was an immense Pavilion, built in a circle. Streets extended outward from the circle, like spokes of bicycle wheels. Most of these original streets exist today, the Pavilion is gone — removed in 1881 and the circle is now a grassy field where families picnic and children play.

An elaborate, ornate arch was constructed in 1875 welcoming visitors to Sea Grove, its intricate design resembling the gates of Heaven.

The Sea Grove House was constructed during those formative years and served as a guest house on a bluff overlooking the Atlantic. During this time, cottages sprung up throughout the community, products of famous men like John Wanamaker, Rev. William Stockton and Dr. J. Newton Walker. After the cottages came the boarding houses and shops. 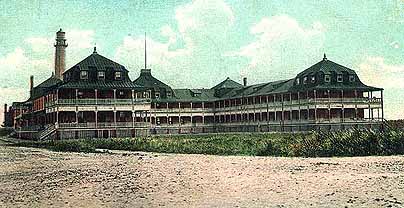 Transportation from the City of Cape May was originally provided by a horse-drawn railroad down Sunset Boulevard, then Cape Island Turnpike. A steam train, operated by the Delaware Bay & Cape May Railroad Company, provided passenger rail service in 1879.

In 1878, when the post office changed its name, so did Sea Grove, and the area incorporated into the Borough of Cape May Point. In 1879, the Sea Grove Association wanted to sell its holdings, noting the religious summer colony it had hopes of establishing failed. The Association invested $500,000 in its venture and put it on the market for just $225,000. At an auction in 1881, many of the association’s holdings were sold for only $120,000, including the Pavilion and Sea Grove House.

The Sea Grove House became the Carlton Hotel and enjoyed 30 years of business before closing in 1910.

After the Sea Grove Association pulled up stakes and left, the Shoreham Hotel was built in 1889; but the hotel failed to capitalize on the success of Cape May Point as a resort and closed in 1909, twenty-years after it opened. The Shoreham had a lawn extending 200 feet to the ocean, 150 guest rooms and 1,200 feet of porches. Its early reputation must have been impeccable, for it was heralded at the time as“one of America’s foremost hotels.”

The hotel was sold and for a brief time the building functioned as the Home for Aged and Infirm Colored People. In 1909, the Rev. Daniel McDermott, pastor of St. Mary’s Church in Philadelphia, bought the property for $9,000. Taking its name from that Philadelphia parish church, St. Mary’s-by-the-Sea, started life as a retreat for members of Father McDermott’s parish.

The property’s holdings grew over the years with the acquisition of other buildings. In 1913, a beach house turned rectory was purchased from Almira Hazzard. Because of beach erosion, the rectory, in jeopardy, was moved in 1962 to a safer location across from St. Mary’s-by-the-Sea. Today the rectory’s original location is under the ever-encroaching sea.

The sisters purchased another beach house owned by the McAvoys. This new building was used for retreats and also moved following a northeastern (or “nor’easter”) storm in 1962.

When World War II intervened in 1941, the sisters leased the former Shoreham Hotel to the United States Army for $1 a year until 1946. During the war years, when the Army occupied the building, no retreats were held. A massive renovation was in order after 1946 because the Army left the building in disrepair. Nuns weren’t permitted to swim in the ocean following the war, as mines were strewn in the water. It wasn’t until 1966 that the mine scare dissipated and the ocean re- opened to swimmers.

The retreat’s location puts it at odds with nature.

Cape May Point has always taken a severe hammering by storms, and widespread erosion is commonplace. In 1900, about 40 blocks in Cape May Point were destroyed by intruding waves.

As far back as 1932, Superior General of the Sisters of Saint Joseph, Mother Mary James Rogers, put forth a proposal to construct jetties to curb the erosion. 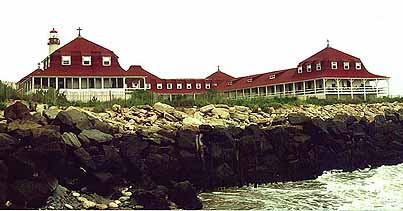 In 1956, concrete and rocks were placed along the coast to prevent erosion, and in 1958, a new sea wall was constructed. Unfortunately, the sea wall was smashed the next year.

Nothing prepared the inhabitants for the nor’easter in 1962, the fiercest, most unmerciful storm in recent memory.

Credit divine intervention for saving the retreat, however. St. Mary’s-by-the-Sea was battered and needed repair, while smaller structures and homes were totally ravished.

Beginning in 1964, another concrete wall was constructed, and an ambitious plan for a dune system and jetties, costing $100,000 each, started. The government awarded Cape May Point a $1 million in grant money to protect itself from erosion.

The Sisters of St. Joseph have spent tens of thousands of dollars since the 1930s safeguarding their century-old property with sea walls and rocks.

But the sea is still reclaiming land, slowly and gradually. Recently, the dunes have eroded so badly that Cape May Point closed some of its beaches. The borough is undertaking a multi-phased beach replenishment plan to construct dunes and a protective barrier.

Sister Raymond said St. Mary’s-by-the-Sea, despite its long history as a beacon of hope in Cape May Point, is in a “precarious position” due to severe erosion. The sea is literally at the nun’s back door.

“We believe it’s prayers that have kept us from going out to sea,” Sister Raymond said. 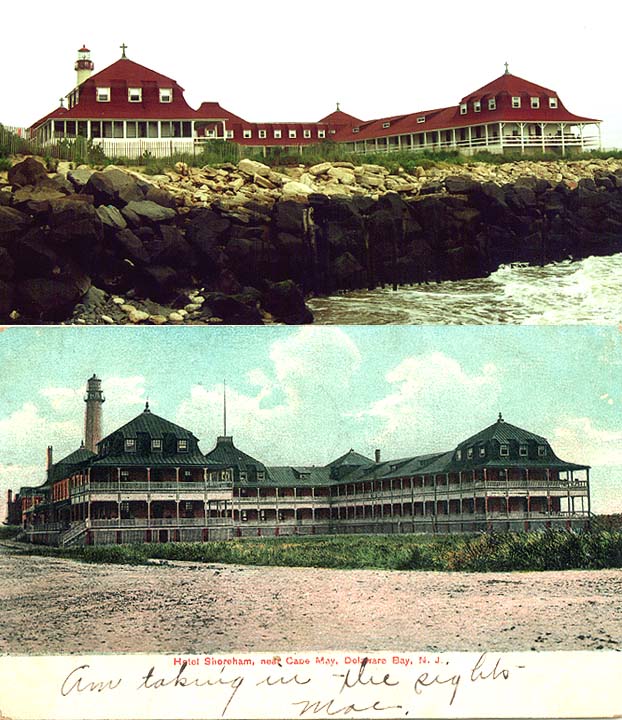 Top photo (August, 2000) shows the precarious perch that steady beach erosion has caused around the solid ground under the former Shoreham Hotel, now St. Mary's by the Sea. Note there are still two levels to the building, but the wall of defending rock blocks the photographer's view from his own precarious position on a wet jetty. The postcard (a colorized rendering from a black and white photo taken from nearly the same point-of-view as above, but apparently on solid ground) was sent home by a visitor to the Shoreham Hotel in 1907 and acquired by Cape Publishing for this article.

Please Note: We are not affiliated with the Sisters of St. Jopseh and cannot provide their current retreat schedule. Please visit their website at http://www.ssjphila.org/cprograms.html