“Water, water, everywhere —nor any drop to drink…”* 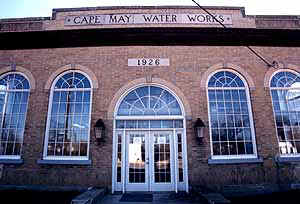 There can be no debate, water is the sustenance of life. As the world’s population and demands increase, natural resources deplete. Today’s worldwide water crisis has forced mankind to push nature even further. What would have been impossible just decades ago, is fast becoming the norm — turning salt water into fresh.

It is ironic, the city famous for Victorian tea tours and 19th century gingerbread houses, recently implemented cutting-edge technology with a desalination (also called reverse osmosis) plant and is calling the shots in supplying water to other municipalities. Cape May City now holds the distinction of being the only city in the northeastern United States to possess such a plant. Desalination is the process of removing salt and other minerals from briny water. This reverse osmosis technology has been employed in the southern states including the towns of Nags Head, Newport News, and Key West, all facing similar water shortages.

To understand Cape May’s water woes, one has to probe the ground underneath to the subterranean aquifers where the municipality has drawn its water from for over a century — aquifers which are actually layers of sand and gravel about 50- to 150-feet thick, separated by clay. Water travels through these at 10- to 15-feet per day. 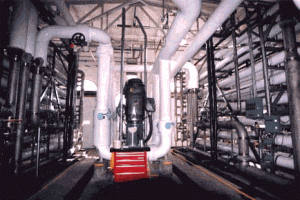 In the early 1900s, wells driven in Cape May City to the Cohansey aquifer provided fresh water supply for the town. Through the years, the town prospered and grew and water needs were met. But by the 1960s, wells 1 and 2 had to be abandoned due to salt water intrusion.

Carl Behrens, Cape May’s desalination plant manager, said as more wells were dug and water drawn, it placed a strain on the underground water supply. Behrens said pumping in wells leaves a cone of depression that gets bigger and as the cone of depression increases, the aquifer level lowers below sea level, and salty water encroaches.

“It’s a matter of pumping more than nature can replenish,” Behrens said.
Wells 3, 4 and 5 were drilled inland to avoid saline contamination. In the late 1960s, well 3 showed signs of contamination and was abandoned. By the 1980s, well 4, too, showed signs of salt water intrusion.

Cape May has a year-round population of 6,800 that mushrooms to 43,000 during the summer. If the city had done nothing, the wells would continue to be tainted by brackish water not fit for human consumption, and residents and tourists would be severely impacted. 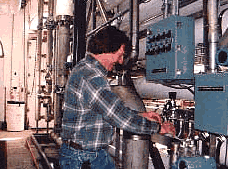 In 1995, Cape May City Mayor Dr. Edward Mahaney was informed by the Southern Cape DESAL Water Advisory Commission, a group studying the city’s water supply problem, that unless something drastic was done, Cape May’s last uncontaminated well would experience salt water intrusion by 1998.The city hired the engineering firm of Metcalf & Eddy Inc. to evaluate and propose a solution to the water supply problem.

The study, finished in April of 1996, proposed six alternatives, one being the construction of a reverse osmosis desalination plant with two new wells dug into the 800-foot Atlantic City Sands Aquifer, the deepest aquifer yet to be penetrated in Cape May County. The water wasn’t wholly pure, more a brackish mix of salt water, but the city believed by reducing the demand on the largely-tapped Cohansey Aquifer, salt water intrusion to Cape May would be slowed.

“The study’s primary and only realistic option to ensure a potable water supply was to build a desal plant,” Mahaney said. The city contacted state legislators and Robert Shinn, New Jersey Department of Environmental Protection Director.

Mahaney provided testimony at a hearing about the statewide water supply plan. Shinn reviewed Mahaney’s testimony and modified the state plan to incorporate a desalination plant for Cape May, making the city eligible for state and federal loans. Throughout the talks and negotiations with state officials, city council kept the public abreast of the desalination plant’s progress. Mahaney said the public approved of the city’s actions for the plant, a factor which made was the plant’s construction such a large success.

“The public overwhelmingly supported it. The public had heard over 20 years that there was an impending problem, but the way we presented the issue to the public, with experts in the field explaining where the potential water supply was, the public saw we had a plan and were willing to support our effort,” he said.

The city did have a plan. In June of 1996, the city awarded Metcalf & Eddy a contract to design and supervise construction of Cape May’s desalination facility. With the plant dovetailed to the state water plan, grants poured in. 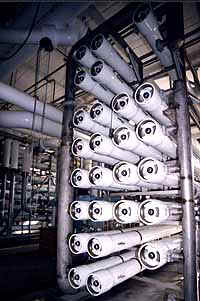 The United States Department of Agriculture provided a $1 million grant and a $2 million 40-year low-interest loan at 4.5 percent. The city also received $250,000 from the governor’s office and $1.7 million through the New Jersey Infrastructure Trust. Total cost for the desal plant: $5 million, the largest capital improvement in Cape May’s history.
“By being very aggressive and securing funding we put a state of the art plant within our economic ability and the rate payers didn’t have to pay for it,” Mahaney said.

In late 1997, the first of two wells were drilled and the plant’s construction began in April in 1998 and started operation in July. Housed in the Cape May Water Works, a brick façade built in 1926, the desalination plant is a towering system of elongated filters and pipes coursing with rushing water. The cavernous water works teems with pipes, pumps and computer wizardry, as water from the city’s wells travels through the reverse osmosis system.
The plant is entirely automated through Supervisory Control and Data Acquisition (SCADA) and probes linked to a computer bank monitor the systems valves and pumps which produce 750,000 gallons of water a day in the off-season and 2 million gallons a day in the summer.

The chemicals antiscalent, sulfuric acid, hydrated lime, sodium and chlorineare used to treat the water. Chlorine, the heady-scented chemical known to every swimming pool owner, is used to treat water and helps eradicate such naturally-forming bacteria and minerals.
“We constantly monitor the quality of our water,” Behrens said. “We’re checking for any kind of contaminant you can imagine. Even though you smell chlorine in the water there’s less chlorine in your water now. “Reverse osmosis is a process where brackish water is forced through a tiny, permeable membrane at 250-pounds per square inch, lessening the salt and solids in the water by as much as 98-percent of salts and solids. The membranes of thin film composites are wrapped in a spiral pattern and stored in massive tubes stacked in arrays.

Twenty pumps of various types and sizes move the water through the plant at 650-gallons per minute. Residue cleansed in the filtration process is flushed out into nearby Cape Island Creek and the effects closely monitored by New Jersey’ Rutgers University.
“A lot of people come and look at this plant,” Behrens added. “I do believe you’ll see reverse osmosis units up and down the coast in the future.” Fifteen graduate students from the Massachusetts Institute of Technology (MIT) recently toured the facility.

Mahaney said Cape May’s desalination plant effectively provides water not only for year-round residents, but adequately handles the ballooning population of during the summer tourism season. Instead of a temporary short-term fix, the reverse osmosis technology will give the city a potable water supply for decades.

“We’ve assured our autonomy in providing water to our residents. The option council went through to build the desal plant wasn’t ingenious. It was an option to guarantee a water supply for a large period of time,” Mahaney said
Desalination technology was so effective that during the summer of 1999, when a torturous drought plagued the region, Cape May’s subterranean wells and desalination pumping station ran at full capacity.
“I am proud to be part of a solution that will last long past our lifetimes,” Mahaney said. “The desalination plant has moved Cape May to a leadership position statewide and nationally on water supply,” Mahaney said. “We’re in control of our own destiny. If we didn’t have an adequate water supply, it would damage our tourist industry. Now, we’re going to be the model for other towns experiencing similar problems.”