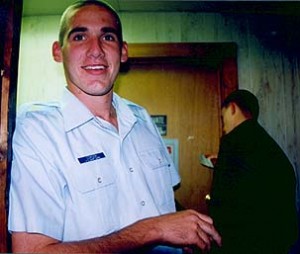 Roaring, people called them. Crazy. The “bees knees.” And the United States was in deep conflict. The Eighteenth Amendment had just been passed — prohibiting the manufacture, sales and transportation of all alcohol.

This new law was to counteract what some considered a “decline of morality.” Young people were bobbing hair and hem lines, and dancing the Charleston until the wee hours. Advocates said Prohibition would nip this new behavior in the bud.

But in Cape May County, Prohibition made matters worse. Hidden waterways and harbors made the county a haven for bootleggers and rumrunners. And seaside resort towns opened their doors to speakeasies — for what was summer fun without the rum? 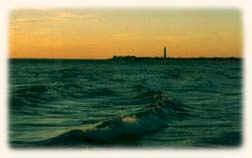 Cape May's strategic location between the ocean and the bay made it a haven for bootleggers and rumrunners during the '20s.

The isolated coastline of the Jersey Cape was a popular landing area for rumrunners. Large ships from around the world would lie offshore in areas like Otten’s Harbor, Schellenger’s Landing and Higbee Beach while awaiting speedboats picking up the cargo.

Max “Boo Hoo” Hoff, a Philadelphia “bootleg kingpin” set up shop on several thousand acres in the northern part of the county. The son of North Wildwood’s Consolidated Fisheries is known to have run one of the largest “rum rings” on the Atlantic Coast, packing liquor into barrels of fish for shipment to Atlantic City and elsewhere.

And with Prohibition, of course, came violence.

Offshore gun battles were commonly reported by sun bathers on the beach. “Gangsters” in Stutz motorcars fought police. Wildwood’s Chief of Police was found murdered. The president of a local bank, a cashier and his wife were beaten and shot to death.
The Cape May Star and Wave Newspaper cried out against this “poison hooch” that was being sold in “grocery stores, fruit stores and other places kept by foreigners and Americans with no principles.” And one irate county newspaperman went so far as to suggest the Ku Klux Klan be brought in to fight “criminals and Prohibition violators.”

The Klan had gained popularity in Southern New Jersey as a way to restore “traditional” racial, religious and social values to what the population saw as “foreign threats.”

Rallies and marches were commonplace, the Star and Wave itself reporting hundreds of mainland farmers attending rallies in Wildwood. The Cape May County Gazette reported on a rally taking place in a local high school. And it is recorded the KKK burned a cross on the Columbia Avenue ballpark in Cape May City near an African-American community. 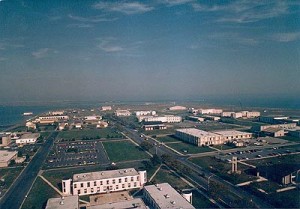 It was the United States Coast Guard (USCG) that came to Cape May County’s rescue. In 1924, the Coast Guard took over the World War I Cape May City’s naval air station fighting the rumrunners and bootleggers with eight seventy-five foot patrol boats.

The Coast Guard is this nation’s oldest maritime agency. Its complicated history consists of an amalgamation of five federal agencies, including the Revenue Cutter Service, the Lighthouse Service, the Steamboat Inspection Service, the Bureau of Navigation and the Lifesaving Service. These once individual groups had independent but overlapping authorities. Over time they were united and placed under the umbrella of the USCG, which, in turn, was placed under Navy Department control in 1941, moved to Treasury Department control in 1946, and finally transferred to the newly-formed Department of Transportation in 1967, where it remains today.

And Cape May today boasts the only Coast Guard Recruit Training Center (TRACEN) in the United States.

Until 1982, Cape May shared its training center with a base in Alameda, California. All recruits from the western half of the United States went to Alameda and all the recruits from the eastern half went to Cape May. For economic reasons, the base in Alameda was eventually closed down and the training center consolidated in Cape May. In addition to cost-benefits, other advantages existed in centralizing the recruits.

“It works better with the entire training center in one place because it is more unified,” says Chief Warrant Officer, Bill Carson. “They have the same training standards and get all their information from one source.”

Anywhere from 3,500 to 5,000 recruits come through the base each year for eight weeks of boot camp. In addition to training, several other Coast Guard commands are located in Cape May. In all, there are about 400 permanent personnel stationed at the training center, about 340 military and 60 civilians.

Even before Prohibition, from early colonial periods through the Revolutionary War and the Civil War through World Wars I and II, Cape May has been the site of various coastal defenses and naval engagements.

During World War II, German submarines were spotted in the Delaware Bay.

The tip of Cape May has always been a reference point for mariners sailing the coastal waters. The Cold Spring Life Saving Station (now the home of the Kiwanis Club on Beach Drive) was built by the federal Life Saving Service, a forerunner of the Coast Guard. It held a lifeboat which would be quickly launched through the surf and rowed to a ship in distress. 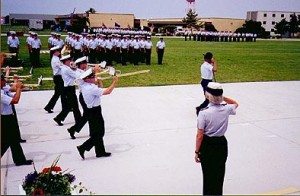 The training center features the Coast Guard's only military band in the nation.

The eastern-most part of Cape May where the base is located has been called Sewell’s Point since 1868 when William J. Sewell built his Fish House restaurant there. On April 14, 1917, the Navy took over Sewell’s Point and converted it into a training base. On the Naval Base grounds, over 300 men built the largest aircraft hanger in the country to house the dirigible ZR-2. When the airship crashed into the English Channel on its trial run, interest diminished and the structure remained empty for years and was eventually demolished.

During this time the Coast Guard also established air facilities for planes used in coastal patrols and in support of the Customs Department. This continued until February of 1941, when more acreage was filled in and a larger airstrip constructed, serving as a training base for Navy aircraft carrier pilots. During this time, the Coast Guard maintained an anti-submarine base here. In 1946, the Navy again relinquished the base and a handful of Coast Guardsmen stayed. The Coast Guard base has remained in Cape May since 1948.

Cape May is not only home to active Coast Guard members and their families but a number of former “coasties” who chose to remain or returned to the area after leaving or retiring. One such resident is Tom Carroll, retired Captain and current owner of the Mainstay Bed and Breakfast Inn (see sidebar)  in Cape May’s historic district. He also serves on various city mayoral committees and serves as president of the Mid-Atlantic Center for the Arts, one of Cape May’s largest organizations.

The Coast Guard’s presence in Cape May has continued to positively impact the economy, local businesses and schools throughout the years. Of the 645 Coast Guardsmen and families in Cape May, 348 live off-base and 135 attend Cape May’s public elementary school — all boosting the Cape May City’s economy.

Two attempts were made, in 1996 and 1999, to relocate the training center from Cape May to a base in Petaluma, California. In 1999, an Optimizing Training Infrastructure Initiative Study was put together to determine whether it would be cost-effective to keep the Coast Guard in Cape May. Documented in this study was the response of Cape May residents who rallied together in an effort to prevent such a move from taking place.

Tom Carroll became involved during both attempts with letter writing campaigns and putting together public hearings by the Coast Guard and different communities. 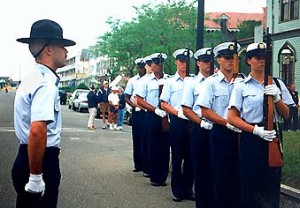 Coast Guard units participate in all community parades and events.

“I would find people who could come and speak on why we needed to keep the Coast Guard, making sure each one had a different angle.” Says Carroll, “Some of the reasons included the need for a desalination plant, the impact it would have on the schools, which are fifty-percent Coast Guard kids, the impact it would have on area businesses and the benefit of having the Cape May Lighthouse and other aids to navigation in the same place as the training ground.”

Other reasons for keeping the Coast Guard in Cape May included the long-standing tradition of “operation fireside” where residents of Cape May opened their homes to recruits who could not be with their families during the holidays, the accessibility of Cape May to friends and family of Coast Guard members, and most of all, the shear number of people that come through Cape May for their training, making it a memorable and meaningful place to those old and young. 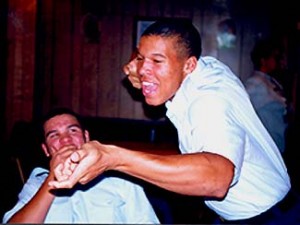 A favorite is Operation Fireside where recruits can relax, call home and enjoy the holidays.

Since the aborted attempt to relocate TRACEN in 1999, the training center has started making a variety of improvements.

“They have been investing into the Cape May base with an air-conditioning project in the recruit barracks; rehabilitating the gym and rehabilitating the auditorium including making it more handicapped accessible and adding more seating,” says Bill Carson. “It is possible a new commandant could come in a few years and change things – take TRACEN out of Cape May, but he would also look at the ‘Optimizing Training Infrastructure Initiative Study’ and take that into consideration.”

Though no one can really determine the future, we can look to the past. Rum running, world wars, and Cape May’s strategic locale all indicate the Coast Guard is in Cape May to stay.