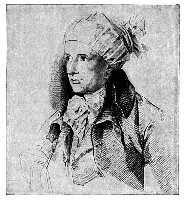 In the early years of the American republic, slavery’s role continued to feed the fledgling nation’s economy.

Five hundred years ago, European ships began capturing and transporting Africans across the Atlantic Ocean as part of a burgeoning slave trade.

“I pity them greatly, but I must be mum
For how could we do without sugar and rum?”

The ships left Europe laden with trade goods, obtained slaves from Africa, trading their human cargo in North and South America for New World goods such as tobacco, rum and sugar. 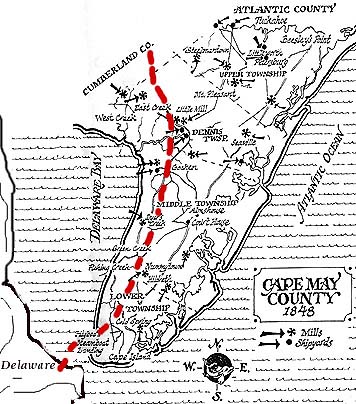 During the American Revolution, slavery flourished across the colonies. Many of the slaves owned in the Northern states lived with their slaveholding families on small farms and were relegated to housework or laboring in the fields.

According to an early newspaper account, the first case of slave freedom in Cape May County came in 1790 in a case of the State against John Ware on habeas corpus proceedings of a slave named Negro Jethro: “In appearing to the court that the said Negro Jethro was born on the eighth day of September, 1768, in county of Cape May and that his mother, Charity Briggs, a mulatto woman, was free at the time of birth, and that Jethro was bound by the overseer of the poor to Nathaniel Foster.”

In New Jersey, the gradual manumission of slavery increased in the early 1800s through legislative efforts.

The New Jersey Society for Promoting the Abolition of Slavery helped with the passage of an act in 1804 that gradually abolished slavery.

Under the act, children born of slaves after July 4, 1804, were to be freed after serving as apprentices to their mother’s masters. For females this meant freedom after 21 years; for males, 25 years.

“In thinking of America, I sometimes find myself admiring her bright blue sky – her grand old woods – her fertile fields – her beautiful rivers – her mighty lakes and star-crowned mountains.

But my rapture is soon checked when I remember that all is cursed with the infernal spirit of slave-holding and wrong; When I remember that with the waters of her noblest rivers, the tears of my brethren are borne to the ocean, disregarded and forgotten; That her most fertile fields drink daily of the warm blood of my outraged sisters, I am filled with unutterable loathing.”

This act made New Jersey the last Northern state to abolish slavery.

The abolition law of 1804 freed 12,460 black New Jerseyans by 1820. The number of blacks still held as slaves was 7,557 at that time. But the abolition act of 1804 received criticism from a second New Jersey abolitionist group, the New Jersey Anti-Slavery Society. The society, formed in 1840, submitted petitions to the legislature, arguing the state already made slavery illegal through its “Bill of Rights,” passed by the state’s second constitution.

Even though the society lost a legal battle over this issue, their cries hadn’t fallen on deaf ears. In 1846 the state passed its second major emancipation law, which formally outlawed slavery. While the law outlawed slavery, it didn’t protect all slaves. Under the act, all black children born after the act’s passage were free, but those blacks were to be “apprentices” for life.

The act did offer former slaves greater legal protection; they could sue for their freedom if abused or mistreated and they could not be sold without written consent.

This act was superseded in 1865 by the 13th Amendment to the U.S. Constitution, which abolished slavery nationally.

Yet it was a long time from 1840 until the post Civil War years and in New Jersey, although most blacks were free, many remained in slavery.

The issue drew its share of critics and opponents in New Jersey, but the overall sentiment leaned toward the South. New Jersey supported the doctrine of state’s rights and believed the emancipation of slaves would cause freed bondsmen to sweep the state, competing with whites for employment. The state was firmly under Democratic control in 1860 and 1864, and Abraham Lincoln did not carry New Jersey in both elections.

In 1850, Swedish novelist Frederika Bremer visited Cape May and described a local restaurant employing “a regiment of somewhat above forty Negroes” and of conversations with a Philadelphia abolitionist.

“I have derived pleasure from my acquaintance with an amiable family, or rather two brother-families from Philadelphia, who live in a cottage near here for the benefit of sea-bathing. Mr. F., the elder, is the minister of a Unitarian congregation in Philadelphia, one of the noblest, purest human beings whom God ever created, true, fervent, and full of love, but so absorbed by his anti-slavery feelings that his life and his mind suffer in consequence, and I believe that he would with the greatest pleasure suffer death if by that means slavery could be abolished,” Bremer wrote. “This grief for slavery would have made an end of the noble minister’s life had not his daughter enlivened him every day with new joy and fascination.”

In the antebellum South, a bondsperson’s life was cruel and painful. Many families were broken apart, sold at slave auctions and relocated. Women slaves experienced sexual abuse from their slaveholders. When slaves learned they would be sold, they often fled.

During the years prior to the Civil War, thousands of slaves attempted escape via a system named the Underground Railroad. Many of the runaways were helped along the way by various “conductors,” anti-slavery sympathizers who provided shelter, food and clothing. A runaway would rest at various stops along the Underground Railroad, en route to safe destinations in Canada, Cuba, Jamaica, Haiti, Mexico or the Indian territory in the west.

But the Fugitive Slave Act of 1850 allowed runaway slaves to be recaptured in Northern states and brought back to their Southern masters. Under the act, those aiding escaped slaves faced heavy fines and imprisonment, placing Underground Railroad conductors also at risk.

New Jersey wasn’t a primary destination in the Underground Railroad but a place where slaves were ferried through along the eastern seaboard. Slaves entered New Jersey from Delaware, crossing the Delaware River and landing in Greenwich, New Jersey in Cumberland County, or through Philadelphia.

Not every slave entering new Jersey made it farther north. Some remained living in seclusion in heavily wooded areas and tiny villages.

Harriet Tubman escaped slavery in 1849 from Dorchester County, Maryland. She arrived in New Jersey and later become the most famous conductor in the Underground Railroad, working for a time in the Greenwich Line.

Tubman worked as a cook in Cape May in 1852, earning money to help runaway bondsmen. She learned how the Greenwich Line worked, and of routes in Salem, Cumberland and Cape May counties, including obscure Indian trails.

She made over 19 trips into the South and helped guide 300 runaways northward, earning her the nickname “Moses,” and a bounty on her head.

According to Jeffrey Dorwart’s book Cape May County, New Jersey, “Turner’s family intermarried with the Cox, Armor, Trusty and Taylor families, establishing wide kinship ties throughout the county. According to tradition, Turner employed his wagon, remote woodland farm in the Union Bethel community, and family ties to operate an Underground railroad station in Cape may County that shuttled fugitive slaves to Snow Hill (Lawnside), Haddonfield, or other stations farther north.”

According to one spokesperson at the Cape May County Historical Society, there are so many rumors about runaway slaves stopping in Cape May County along the Underground Railroad, but no real evidence to point to actual incidents.

One reason is Cape May’s geographical location on the Delaware Bay, farther from Delaware than Salem or Cumberland counties.

Yet published accounts tell of mariners from Cape May and Atlantic counties, many of whom were free blacks, operating the Underground Railroad line into Greenwich, New Jersey. In the 1850s, fugitives traveled by foot from Cumberland to Cape May County. Lenni Lenape guides assisted runaway slaves through the swamps and bogs at night, avoiding slave catchers out for bounty.

A boat operated between Cape May and Lewes, Delaware then, as it does currently. At night, local mariners operated a route across the Delaware Bay, ferrying slaves across.

Turner may have assisted Harriet Tubman with moving escaped bondsmen through Cape May County. In Emma Marie Trusty’s book, The Underground Railroad Unveiled – Ties That Bound, Turner and notably, churches, were responsible for aiding slaves.

According to Trusty: “We conclude that some members of the Union Bethel community functioned as station masters. Others were said to have hidden slaves in a cave near Cape may Point and on Edward Turner’s farm. Family ties and friendships transcended church denominations. Black church communities functioned as one soul on the Underground Railroad when the need arose.”

While the compassion of the Quakers who populated southern New Jersey helped raise anti-slavery sentiment, it was the free black community itself that provided aid to runaway slaves. In Philadelphia, black minister Richard Allen’s church, the first African Methodist Episcopal Church, known as “Mother Bethel,” secretly housed hundreds of slaves as an Underground Railroad station.

The A.M.E. churches soon spread to communities in southern New Jersey, providing safe havens for slaves on the run.

“Church members in this region were actively engaged in Underground Railroad activity. Members and friends of the Cape May Underground railroad worked as watermen aboard ferry boats,” Trusty writes.

Turner and his family continued operating his Underground Railroad station well into the Civil War. Slavery came to an end nationally following the war, but the Underground Railroad helped thousands find freedom. Cape May’s contribution wasn’t as significant as the major routes through Baltimore, Philadelphia, New York, or Boston in the east or Detroit, St. Louis and Chicago in the Midwest, but it did play a role in secluding and moving some slaves.