CAPE MAY, N.J. – The German High Command called it “Operation Paukenschlag” or Operation Drumbeat. Not wishing to be outdone by the Japanese bombing of Pearl Harbor, on December 11, 1941, German Chancellor Adolf Hitler ordered his most fearsome and silent fighting force to sortie into the Atlantic Ocean off the coast of North America in hopes of scoring another crushing defeat on the American Navy. With a coordinated U-boat attack on Allied warships, tankers, tenders and Merchant Marine supply ships, Hitler very nearly saw his wish fulfilled.

Dozens of Nazi submarines wreaked havoc on a surprised and woefully unprepared United States Navy for over a year during those first frightening days after our entry into the Second World War. Eventually, U.S. patrol ships and aircraft became skilled at tracking and destroying enemy U-boats, but not before the deadly wolf packs had sunk 2,775 Allied vessels amounting to over 14 million tons and hundreds of lives lost.

One of the few successful German submarines to survive to the end of the war was designated U-858.  Nazi subs were neither built nor launched in strict numerical order because the German Navy wanted to confuse the Fatherland’s enemies as to the actual number of boats in service at any one time.

The U-858 was 240-feet long (pictured above is the actual submarine captured), weighed 740 tons and was armed with four torpedo tubes in the bow and two in the stern. She was designed to carry 21 torpedoes and a crew of five officers and 52 enlisted men. Her cruising range on the surface was more than 18,000 miles at a speed of 20 knots while running on diesel power. Submerged, the U-858’s electric motors could propel her at 8 knots for 70 to 80 miles. She could dive in as little as thirty seconds and remain underwater for hours on end, operating at a depth of more than 200 feet.

Contrary to popular belief, most torpedo attacks were launched from the surface since the U-boat needed its diesel engines to get into attack position and keep pace with its target. This meant that most torpedo runs during Operation Drumbeat occurred under cover of darkness or poor visibility, often within sight of land. All too frequently, Americans residing along the east coast from New York City down to Miami Beach were jolted from their beds by loud explosions just offshore, followed by a blaze of fire on the horizon.

On board the cramped submarine, attacks began with an alarm klaxon and an order from the U-boat Commander to his First Officer, “Gefechtsstationen!” or “battle stations!,” followed by a rapid exchange of commands and status reports between the two men.

But if this was a fairly routine sequence of events, what was so special about this submarine?  U-858 was the first Nazi submarine to surrender to the United States Navy after the cessation of hostilities with Germany in May of 1945. And the surrender took place about forty miles off the coast of Cape May, New Jersey.

U-858 had been out on patrol for six weeks and had torpedoed 16 Allied ships when her commander, Kapitanleutenant (that’s equal to a Lieutenant Commander) Thilo Bode received word from his wireless operator that Germany had capitulated and all naval vessels were ordered to stand down and surrender as soon as possible. Kapitan Bode immediately signaled his intention to turn over his vessel to American forces, and on Monday, May 14, 1945 he rendezvoused with a task-group from the US Atlantic Fleet, just east of Cape May. 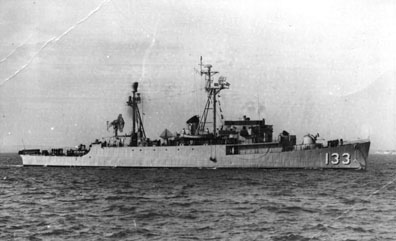 USS PILLSBURY DE- 133 After hostilities with Germany ended, Pillsbury and Pope (DE-134) escorted the first surrendered Nazi U-boat, U-858, from mid-Atlantic to Cape May, N.J., after placing a prize crew aboard. Photograph and caption supplied by the {link:http://www.navsource.org/archives/06/133.htm}Destroyer Escort Information website{/link}.

Naturally, newsmen and photographers were on hand to document the historic moment. They reported that the crew of U-858 seemed quite young (the average age for U-boat crewmen was 20 years of age). They said the men looked unkempt and a bit ragged, but six weeks of traveling in what has been described as a sewer pipe with valves (German subs of that era had no showers or laundry facilities) could make any group of men less than fresh.

The reporters at the transfer of command noted that the 27-year-old Bavarian Kapitan Bode was tall, smooth-shaven, and pasty-faced, with a keen wit about him. When journalists asked the German skipper for his reaction to the surrender orders, he shrugged his shoulders and said, “We expected it. What was the use of going on? We hadn’t seen any ships to attack.” Kapitan Bode added, “Give me my submarine, my crew and I’d like to help fight the Japs with the US Navy.”

The Navy declined the offer and took U-858 and her crew to Fort Miles, Delaware, for processing. The sub was later towed to the Philadelphia Naval Shipyard and scrapped. It was Cape May that made all the headlines, and the public relations value of this history-making surrender was not lost on certain members of the local press.  On May 17, 1945, just three days after U-858 surrendered, the Cape May Star and Wave published the following editorial, written by a columnist with the clever name of C. Worthy:

“If resort publicity means anything, Cape May hit the jackpot during the last few days, as a result of the Nazi submarine’s surrender off the local coast. Streamer headlines, coast-to-coast broadcasts, newsreels and wire photos carried the story to millions of people throughout the world, and in all of them Cape May was prominently mentioned.”

The article went on,

“It’s things like that about Cape May that make neighboring publicity departments green with envy at times. We know a couple of press agents whose best laid plans have netted not more than a paragraph in the city sheets, who would have given their eye-teeth to have the sub captured off their resorts.”

We don’t know what is lurking in the sea beyond Beach Avenue these days. The war against the Germans is long over, some say even fading into oblivion now.  But maybe, just maybe, Cape May’s position on the east coast will again find her in the spotlight of history, spreading the word that she remains a very special place in America..

With special thanks to local author Richard Daniels for his help in the research of this article.