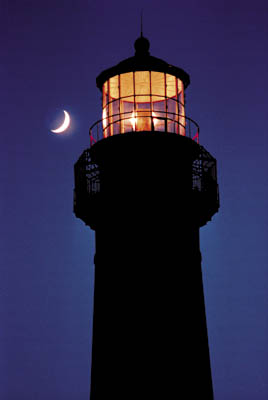 Behold the Cape May Lighthouse.

She stands there so silently and aloof that we find it difficult to fathom her age and the epochs that have swirled about her base.  At her birth (1859), the era of the steamship had not quite dawned. As the first keepers trimmed her sperm whale oil lamps and polished her lens, clipper ship captains scanned Cape May for her 30-second flash. As armies clashed at Gettysburg (1863), her beacon probed the Delaware Bay – once every 30-seconds. As Queen Victoria gripped the helm of the British Empire (reigned 1837-1901), this beacon swept the sea as steadily as the rhythms of time. As the heart of Cape May City burned (1878) and entire blocks of grand hotels, shops and homes fell into heaps of blackened rubble, her light flashed behind the smoke and the flames – once every thirty seconds. Every night, through great wars and great storms, through hot sunny summers and cold dark winters, her keepers carried oil up these same 217 steps and faithfully lighted the lamp. She flashed her signal every 30-seconds. Yet, she is not the first to stand here on this spit of land.

Since 1823, we know of three different lighthouses that have commanded the Jersey Cape. Have other unknown sentinels stood and then fallen before them? That very question has fascinated Cape May Lighthouse enthusiasts for years. 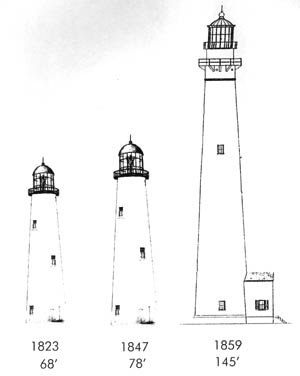 On June 18, 1790, Alexander Hamilton, Secretary of the Treasury, presented the first official report on the nation’s lighthouses to President Washington. His report lists all known lighthouses in the country, state by state.

Hamilton gathered his information by interviewing representatives from each of the states in the report. He lists the Sandy Hook, New Jersey Lighthouse under the state of New York, as the Wardens of the Port of New York had responsibility for its maintenance and upkeep. He lists the Cape Henlopen (Delaware) Lighthouse and “several buoys, beacons, and piers, for the security of the navigation on the Bay and River Delaware.” under the state of Pennsylvania as the Philadelphia Board of Port Wardens had responsibility for those navigational aids. Consequently, Delaware received the same report as New Jersey, “There is no lighthouse nor other establishment of this nature, those on the Bay and River Delaware answering for that State.” Perhaps he was right about New Jersey; perhaps not.

We do have considerable evidence (though none of it official) that earlier lights have indeed marked this peninsula. Consider the testimony: 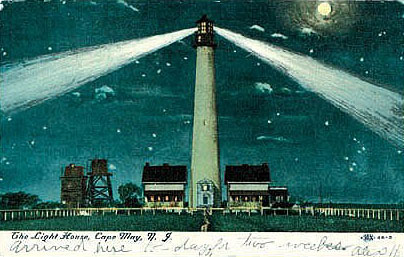 1. Philadelphia has always been an important seaport, accessible only through the Delaware Bay. Thus, the Bay has always been a heavily traveled waterway. Merchants, military, fishermen and whalers have sailed the Delaware since well before the Revolution (Philadelphia was the nation’s first capital). Cape May marks the northernmost seaward entrance to the Bay. Shipping bound from England, New York City and Boston must navigate around Cape May to enter the Bay. Bay pilots, ship builders, and whalers originally settled Cape May. In fact, Cape May’s whaling industry in the 1600s rivaled that of Cape Cod. It doesn’t seem possible that all of these seamen found safe harbor here for some 200 years (1600-1823) without some large marker or light. 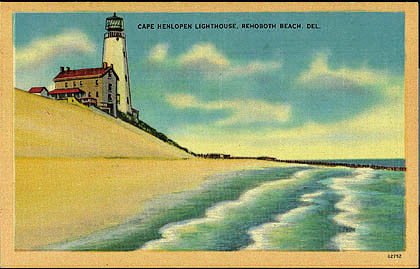 3. In 1776, Colonial Philadelphia businessmen financed and constructed the seventh lighthouse to be built in the Colonies at the South entrance to the Bay, Cape Henlopen. Why did they not build one on Cape May? Could it be that someone had already built a lighthouse on Cape May?

4. In 1785, The Pennsylvania Board of Port Wardens purchased a tract of land on Cape May from “one Thom-as Hand 2nd, Gentleman, for the purpose of erecting a beacon thereon for the benefit of navigation.” The site for this lighthouse is believed to be on a high bluff in front of the present location of Congress Hall.

5. The July 1801 edition of the Philadelphia Aurora contains an advertisement entitled, “Sea-shore Entertainment At Cape May.” The copy rolls on with tempting descriptions of the accommodations, food, liquors and the care of horses available to the Cape May visitor; followed by this remarkable passage: “The situation is beautiful, just on the confluence of Delaware Bay with the ocean, in sight of the Lighthouse, and affords a view of the shipping which enters and leaves the Delaware Bay…”

Was Cape May really dark until 1823? It really doesn’t seem so, but no one living today knows for sure. If earlier towers did mark this Cape, wars and the pounding surf have hidden their legacies in the foggy mists of the Cape’s early history. We do know that during the Revolution, the British burned and destroyed many American lighthouses to confound American shipping. They burned Cape Henlopen “nearly to the ground. ” If there had been a lighthouse on Cape May they would certainly have destroyed it the same way; perhaps completely. But, without a trace? Let’s consider what we do know! 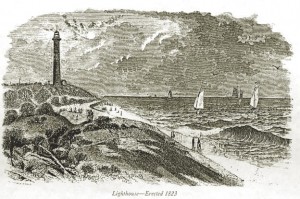 The following October, Cape May’s first known Lighthouse began flashing its signal out to sea. Its lantern stood 88 feet above the ocean, atop a 68 foot tall brick tower. The light had “15 lamps with 16-inch reflectors. Revolving. Removed and rebuilt in 1847, 400 yards N.E. from old site.” Its brick tower had a 25 foot diameter at the base and stood on a stone foundation. Its wall measured a full 6 feet thick at the bottom and 2 1⁄2 feet thick at the top.

Erosion has always threatened lighthouses, especially where they have been built upon sand. Since we have no granite cliffs in Cape May, this lighthouse, by necessity, stood on shifting sands. Soon, with every high tide, the relentless pounding surf surrounded the tower and began washing away its foundation. The government discontinued its light on May 1, 1847 , dismantled the tower, and moved it to higher ground. The location of the old lighthouse is now itself at sea, over 100 yards off shore southwest of the present tower. It lasted only 24 years. 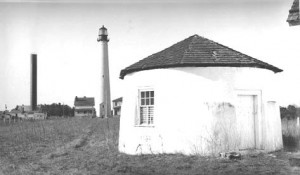 Cut-off base of the 1847 lighthouse. Click for full image

As the site of the first tower surrendered to the unpredictable demands of the sea, local contractors, Samuel and Nathan Middleton, were busy rebuilding it at its new location 400 yards (that’s the distance of four football fields) to the Northeast, safely inland from the eroding coastline. The new tower stood 78 feet tall. We have no known pictures, good illustrations, or further descriptions of these early lighthouses. However, from photographs of the cut-off base (below) we can see that they had a 20-25 foot diameter. If I draw those dimensions to scale and project the angles of the cut-off base to a point 68 feet above, a beautifully proportioned lighthouse appears.

The Middletons built a round tower of red bricks resting on a stone foundation, resembling other lighthouses of its period. Though similar to its current sister, it had a shorter tower with an entry door at the base and no vestibule, painted with whitewash inside and out. A wooden stairway spiraled up the inside of the tower into a black cast iron lantern. The lantern itself was small, cramped for room, and poorly ventilated. It contained a catoptric device that used polished mirrors to reflect and intensify the light.– This device had 15 reflectors on three faces (five on each face), ten of them were 15-inch bowl shaped reflectors, and five of them were 14-inch spherical shaped reflectors. The light revolved once every three minutes. Its three faces caused it to flash once every minute.
The drawing to the right shows a similar catoptric device that has only three bowl shaped reflectors on each face. 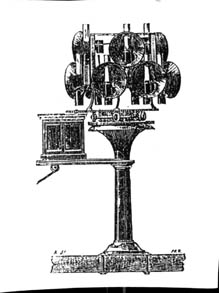 The 1847 lighthouse would have been quite adequate had they built it half a century earlier, but the increasing demands of Atlantic coastal shipping in the mid-1800s required more. Ships’ masters began to criticize the Lighthouse Service. Wrecks became increasingly commonplace up and down the seaboard. Something had to be done!

In 1851, after being bludgeoned by volleys of complaints about the lighthouse establishment, Congress appointed a board to investigate and inspect the nation’s lighthouses. The inspectors found that under the Treasury Department’s Fifth Auditor, Stephen Pleasonton, the Lighthouse Service had deteriorated to a dangerous level. (See Appendix B – Administration of the Fifth Auditor.) Their findings changed the lighthouse service forever. After the investigating board published its report in 1852, Congress immediately appointed a Lighthouse Board with the charge of totally reorganizing the system.

Cape May’s inspection, dated June 25, 1851 (see Appendix C for the complete report), found the station to be in a sad state of repair. The tower had been “rough and rudely built,” leaking, unpainted and rusty. The light revolved irregularly and lacked ventilation. The keeper had no training, no printed instructions, and a poor state of morale. He lacked basic supplies such as paint, trimming scissors, broom-s, and brushes. His quarters leaked, its plaster was cracked and many of its windows were broken. The lifesaving boathouse was locked up tight and the keeper didn’t have a key.

In short, the station received the kind of report card that causes youngsters to dawdle on their way home from school hoping to delay the inevitable confrontation. 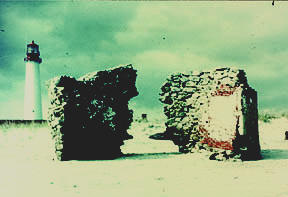 Pieces of the 1847 lighthouse

On March 3, 1857, Congress appropriated $40,000 “For rebuilding and fitting with first-order apparatus the lighthouse at Cape May entrance to the Delaware Bay.” That appropriation fired the final broadside into the 10-year old lighthouse. And, as we will see, for Cape May it couldn’t have happened at a better time!

The Board left the second lighthouse standing after the new light-house had begun operation, but demolished it in 1862. “The old light tower…having been found to be productive of danger, by misleading mariners by day, has been thrown down, and steps taken to dispose of the old materials.” Those steps were to sell the bricks. Keeper Downes E. Foster kept a record of who bought the bricks and how many bricks they bought. About 70 buyers bought loads of cleaned bricks for $3.00 per thousand, and quantities of “brickbats” (bricks still cemented together) $.50 per load. All of the sales totaled $150. Many Cape May County homes and chimneys contain bricks from this early lighthouse….

To keep the story going,  you can obtain your own copy of John Bailey’s Sentinel of the Jersey Cape, the Story of the Cape May Lighthouse. The book is available in Cape May at the Atlantic Book Stores, The Baileywicke (where you might meet the author) Celebrate Cape May, The Whale’s Tale, Shore Designs, the Emlen Physick Estate Gift Shop and the Cape May Lighthouse.