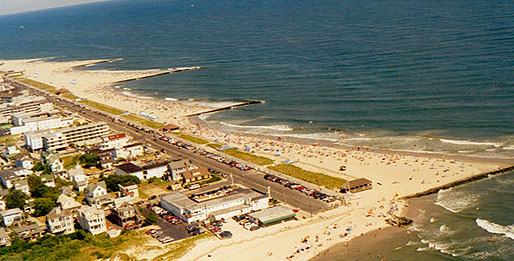 “It’s Beach Drive, not Beach Avenue. Our family has been here for sixty years and it’s always been Beach Drive. It’s only recently they started calling it Beach Avenue,” so says Robert Fite, former owner of the Colonial Hotel, circa 1894, now called the Inn of Cape May at Beach Avenue and Ocean Street. The hotel is still a landmark on Beach Avenue in the heart of Cape May. 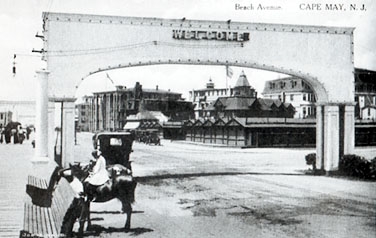 Opinions run strong and memories deep among those whose families have lived in Cape May for the most of the 20th century. The history of Beach Avenue is rich with tales of fires, storms, innovations and a lifestyle now nearly forgotten. An 1850 street map of Cape Island shows five hotels running along the avenue. They were Congress Hall, Old Atlantic, New Atlantic, Columbia House, and the Mansion House. The next year, 1851, Cape Island incorporated and became Cape Island City. According to The Summer City by the Sea, by Emil R. Salvini, the Cape Island Turnpike Company laid out a road connecting the steamboat terminus to Cape May in 1852, known today as Sunset Boulevard.

That same year talk began regarding construction of a railroad linking Camden City to Absecon Island, but the rail lines did not come to Cape May until the Civil War years in 1863. With the railroad, came more tourists, and in 1869 the Stockton Hotel opened taking up the entire block between Howard and Gurney streets and Columbia Avenue and the Atlantic Ocean.

In the sitting room of the two-story home Fite shares with his wife Betsy, he recalls the “halcyon days” of Cape May in the 1920s, ’30s and ’40s. “Our house was where the horse stables for the Stockton Hotel were situated,” said Fite. “The stables were demolished prior to WWI.”

Raymond Fite (Robert’s father) along with his wife and family, two sons and a daughter, took over the Colonial Hotel from Wil Church, the original owner, in 1927.

Robert remembers, “in those days people came with steamer trunks and they stayed at least one week, most often more. And, of course there were no restaurants. The hotels all had their own restaurants. We baked our own bread, made our own desserts, and all that time I bet we didn’t have more than four chefs. We had a children’s dining room where a paid attendant watched over the children while their parents ate in the big dining room. 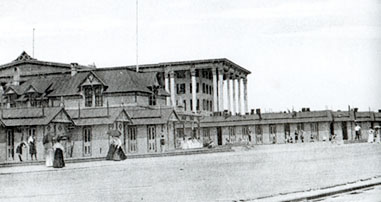 Everyone dressed for dinner. The men in coats and ties. On Saturdays the women would be in evening dress. After dinner they’d go across to Convention Hall for dancing. That went on until the 1940s when people still went dancing but things gradually started becoming a little less formal.”

Bathhouses were common along Beach Avenue up until the ‘ 60s. The Colonial alone had 1,000 bathhouses lined along its property. The one-story buildings had showers, hooks for clothes and beach towels. Day-trippers, or “shoobies,” – those who took the train to Cape May for the day with their lunch in a shoe box – could rent a woolen bathing suit if needed. 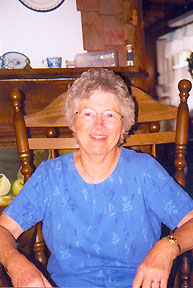 “Back then,” recalled Betty Steger, whose father-in-law Steven began Steger’s Beach Service in 1930, “hotels had strict rules about being seen in the lobby with bathing attire and you couldn’t bring all that sand into the hotel rooms, so everyone who owned a hotel or concession along the beach had bathhouses. We had boys who would go along the bathhouses and gather up the towels and bathing suits. We’d wash them and hang them up to dry on the rooftops of the buildings. I remember one woman insisted we put up galvanized hooks in her bathhouse so her clothes wouldn’t get rusty on the hook.” As a view of the ocean from the hotel rooms became more of an economic edge and insurance on the bathhouses began to climb, the structures gradually were torn down. “And, you know,” said Fite, “People just quit using them in the ’60s. We saved as many of them as we could. One was moved down to Poverty Beach (at the east end of Beach Avenue) and is being used as an office for The Beach Club. Another one was eventually moved up to Lafayette Street and is currently a gift shop [Tradewinds] situated next to Elaine’s Restaurant.”

The landscape of Beach Avenue has always been unique compared to that of other shore towns. 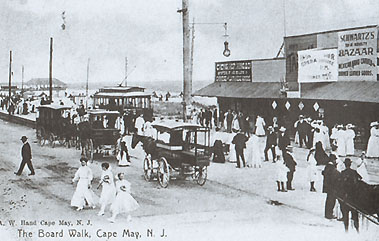 “We’re one of the few places,” said Fite, “that has a road going along the beach.. It’s always been like that. The trolley ran along the boardwalk until the 1920s when the tracks washed out.” The trestles for the railroad were still in existence along the avenue until the Nor’easter of ’62 swept them away.

The railroad/trolley line started at Sewell’s Point amusement pier, which is now the site of the U.S. Coast Guard Base, and ran along Beach Avenue’s boardwalk into South Cape May (so named because it faced south) to the lighthouse at Cape May Point. The borough of South Cape May ran from 7th to 21st avenues. Chartered in 1894, it is currently under the sea. Many of its Spanish cottages built along Beach Avenue were either destroyed by storms or moved into Cape May proper. The Great Atlantic Hurricane of 1944 put an end to South Cape May.

Betty Steger remembers as a girl of 14 watching from their Grant Street apartment the onslaught of the Great Atlantic Hurricane. “You didn’t hear warnings about storms the way you do now. It must have happened on a Monday because I remember my father getting on the train to go to work that morning. He came down from Philadelphia to be with us on weekends. The hurricane seemed to come out of nowhere later that afternoon. I’ll never forget it. I saw three big tidal waves that just lifted the boardwalk up crashing it onto the football field where Summer Station and the Oceanview Restaurant are now. I was so frightened.”

Storms and time have altered Beach Avenue more than once. The Nor’easter of 1962, a March storm 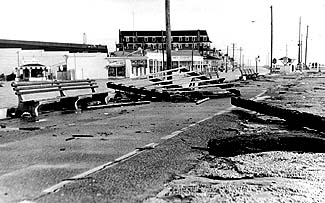 which coincided with a full moon and high tide, again destroyed thirteen blocks of the boardwalk spewing debris all along Beach Avenue, and marked the end of a the traditional wooden boardwalk. A concrete promenade was built in its place along Beach Avenue with a sea wall to try to protect the beach front from future storms. The ’62 Nor’easter proved to be a precursor for many other changes that were to affect the way Beach Avenue would look.

Robert and Anna Bundschu were the proprietors of the Jetty Motel from 1971 until last year. The Jetty was built on Beach Avenue in the late fifties and along the with the Cove Restaurant and the Second Street pavilion marks western end of Beach Avenue today. The Bundschus, who came to Cape May from Wildwood Crest, said that the biggest change in Cape May came with construction of motels in the 1960s.

“Before the ’60s,” said Anna Bundschu, “Cape May was known for its grand hotels and its elegance. I think once the motels came, you had more tourists staying shorter times. Then so many of the fine hotels went into disrepair, like the Windsor Hotel. Well, eventually that burnt down and [the land] was sold for condominiums.”

Robert Fite agreed, “In the ’60s people’s lifestyles changed. We went from quoting weekly rates to daily rates and so many new restaurants and gift shops opened. People weren’t as dependent on the hotels for all their needs, but I think Cape May has aged gracefully and still retains much of the old elegance.”

“Many of the old places we used to go to are gone,” said Betty Steger. “I remember the Green Mill Club a 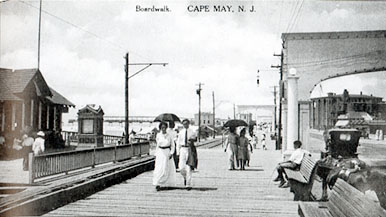 t Beach and Howard. It was a place for teenagers to go. They had a Ping-Pong table, a soda fountain. This was in the 40s. They had dances and a woman who ran it kept an eye on everyone. I was there every night. And where the movie theater is, used to be a McPherson’s Horse Back Riding. That would have been in the ’30s and early ’40s. I used to love to go there too.”

And about that pesky name? Beach Drive or Beach Avenue?

“Oh yes,” said Betty Steger, “We’ve always called it Beach Drive. It’s only recently that the street signs say avenue. In fact you see, I have some old stationary that says … oh… it says Avenue.” 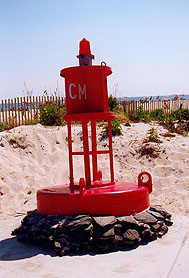 Mayor Jerome Inderwies says no doubt about it, it is Beach Avenue. “And I’ll tell how I know. I always called it Beach Drive. We had a tax assessor for years by the name of John Dollinger, and one day he corrected me. ‘It’s Beach Avenue,’ he said. ‘Always was, always will be.'”

Beach Ave runs 2.2 miles from Wilmington Ave. at the north-east end (Poverty Beach to Second Avenue at the south-west end.

On the city-side of Beach Avenue, there are 19 motor inns or resort hotels, 3 historic hotels, 19 restaurants, 7 condominium complexes, 24 shops and galleries.