And how do I climb thee? Let me count the ways…

Believe it or not, I found there’s more than one way to approach the Cape May
Lighthouse, which by the way, celebrated its 145th birthday on Halloween. 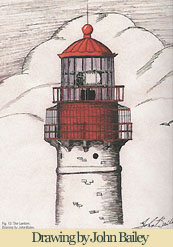 Climbing the Cape May Lighthouse is one of our quintessential tourist experiences and people have been indulging in the climb since 1988 when the Mid -Atlantic Center for the Arts (MAC) leased the lighthouse from the United States Coast Guard. That was the first summer the lighthouse was opened to the public and the first time in 50 years that civilians ascended the long, narrow, curved staircase.

For one reason or another, I have spent most of the summer and well into the fall looking at, photographing, and climbing, or at least thinking about climbing, the 199 steps that lead to the tippy-top of the lighthouse watch gallery.

My first excursion was in June as I put into action an itinerary for seeing the sights around the island on foot. Starting from the Pavilion at the west end of Cape May’s promenade, I took a stroll along the beaches which lead to Cape May Point State Park. A path which branches off near the old bunker led me to the observation deck in the park and then a short walk across the parking lot put me right in front of the lighthouse. 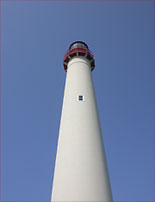 I think the entire walk took only 20 minutes, but I must confess, on that very warm day and with the prospect of having to walk back to Cape May, I stood before the massive cylinder, straining my neck to look toward the top and a beautiful blue sky and decided, “Nah, not today. Right now I’ll just think about climbing the steps.”

That said, it is still an excellent way to approach the lighthouse climb. I would suggest a light (emphasis on light) picnic lunch in the park. Give yourselves a little rest and plenty of water and then “forward ho.”

I believe it was a Saturday afternoon in July or early August when I next attempted to climb the 199 steps. This time I biked out to the park via Sunset Boulevard making a left onto Lighthouse Avenue. I wanted to get the true tourist experience. You know – that would be the one where you’re climbing and winding and climbing along with what seems to be a sea of a billion other people and suddenly, a large rotund man is descending the very same, very narrow stairway demanding you move out of his way lest his panic attack becomes even more pronounced than it already is. Pressing my body against the red-bricked inner wall, I said to myself, “This too shall pass,” and he did.
When I got to the watchman’s gallery a very nice lady answered all the questions put to her and also let people know about the books which are available on the
Cape May Lighthouse. Then I stepped outside to see the view.

Because I live here, I chose a clear day with little wind and so my view was spectacular. I know that visitors don’t always have the luxury of picking their 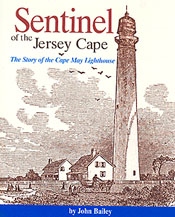 weather, but if you do have a little leeway, give yourself a break, pick a nice day and you’ll have a wonderful experience once you get to the top – because that is the frosting on the cake. It’s another world up there and as close to feeling like a bird as I guess humans can get in Cape May.

But a word to the wise: Don’t go on a Saturday afternoon anytime – let alone in July or August. It’s crowded. And why punish yourself? If circumstances dictate that you can only come on a Saturday, arrive early or closer to closing time because one thing you don’t want to do is to scale the steps as though it’s just another thing you have to do so you can say, “Yeah, yeah. We did that. Very nice. Very lovely. Now let’s get out of here.”
That said, let me tell you about what I think is the best way to climb the lighthouse. At night. MAC offers a tour called Stairway to the Stars. I made sure that I bought my ticket Saturday afternoon at the information booth at the end of Washington Street Mall because I didn’t want to miss the tour (Stairway to the Stars is limited to 35 tour goers) and also because my excursion coincided with New Jersey’s Lighthouse Challenge in which visitors are challenged to visit 11 New Jersey lighthouses in a span of 48 hours. Good thing I bought my ticket early because it was standing room only on the ol’ trolley which boards at Washington Street (directly across the street from the information booth).
Dan was our very able bus driver and Rich Chiemingo, manager and keeper for the Cape May Lighthouse, was our guide.

Everything went right on this tour – because you know how wretched tours can be
sometimes. First off, it was a perfectly clear night, the stars out in full force, and winds were at a minimum – as opposed to the Thursday when I originally planned to take the tour. On that night, the skies were cloudy, a precursor to a very nasty storm which came through later that night and – this is the most important point – wind gusts were approaching 40-50 mph. That’s a challenge I chose to skip.

But back to my perfect night. We couldn’t have had a better tour guide. Rich, in addition to having a very sexy voice, is quite knowledgeable about the lighthouse and told us things I don’t really remember reading about, for example the fact that the current lighthouse built in 1859 was first lit on Halloween night. Also he told us that every lighthouse has a distinctive signal which lets the navigator or sea captain know that he is approaching the Cape May Lighthouse as opposed to Barnegat or Absecon. Cape May’s is a 15-second blink. In addition, each lighthouse also has a distinctive color characteristic. No lighthouse is painted the same for land identification. Cape May’s colors are a sandy -colored tower with a dark red top and this is called its day mark. There are lots of details about the lighthouse and lots of history but it’s the beauty of the lighthouse that I want to tell you about.

I’ve never been to Cape May Point State Park at night so the first thing I noticed when I stepped down from the trolley was how desolate and dark it was. I imagined what it must have been like out live out here at a time when the only houses were the keeper’s and his two assistants.

The lighthouse itself was spotlighted for us so we could safely walk to the entrance. The 157 1/2-foot tower looms ghostly against a blackened sky. Keeper 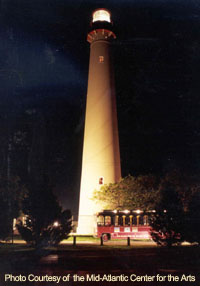 Rich tells that that as of 1870 or so a newly formed lighthouse board required all lighthouses built in the United States to be, among other things, at least 150 feet high and built to withstand 5-times hurricane force winds.

Because it is a tour, our ascent is much slower and more relaxed than my summertime climb. At the top, I step outside onto the observation deck. During the day, my attention was focused on the view – Delaware Bay, Cape May, Cape May Point and all things directly below me. At night, it’s all about the stars.

Never having been a Girl Scout, I can’t name the constellations in view but I can appreciate their beauty and that of the ferry looking all twinkly and
fairy tale-like crossing the bay to Lewes, Delaware.

Tour-goers are quiet or speak in soft tones like a those inside a church do.

When it’s time for me to descend, I do so rapidly because there’s really nothing
to see out the windows. I wait for the rest to come down. We must stay in the lighthouse until everyone is down. Keeper Rich then takes us outside to the gate where our trolley bus is waiting, but first, he says he has a surprise.
He turns the spotlight and all other lights off. We look up at the lighthouse just as many a lighthouse keeper must have stood over the years with nothing else but the beacon light to break the darkness about us. The lighthouse stands regal, solitary and comforting.

So that’s my tale. How do I count the ways to climb thee?  One step at a time,
of course. So happy climbing because know this – it truly is worth it.

Don’t think just because you’re reading about this in November that all is lost.
I have it on great authority that the lighthouse stays open daily through January from noon to 3. For Stairway to the Stars info log onto the www.capemaymac.org.