The fire that started on November 8, 1878 and spread from the Ocean House on Perry Street to engulf 40 acres of hotels, stores and houses in flames was one of the most devastating and furious fires of the era. The economic impact lasted for years and forced Cape May to begin a spurt of construction in the two decades that followed, producing a legacy of Victorian architecture for which Cape May is now famous.

But that was long ago and far away, so long ago that our appreciation of the town’s losses are hard to comprehend. For a different perspective on their loss, we ask what would the town lose now if the same area burned out of existence again today, 125 years later? Given fire fighting capabilities, manpower and preparedness, such a catastrophe is highly unlikely; but a summary of the lost businesses and buildings might help us understand today what the impact must have been like in 1878.

If the same acreage were destroyed today, what would no longer exist in Cape May? 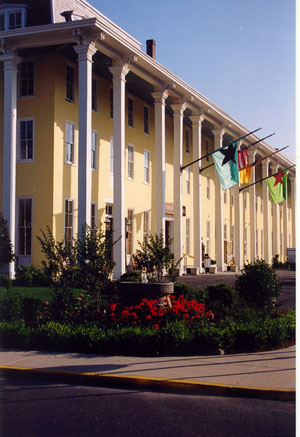 Today, Washington Street Mall runs from Ocean to Perry Streets. The 1878 fire consumed the entire south side of one block (Perry to Jackson) which is currently home to a dozen businesses and restaurants, apartments and shops.  Carpenter’s Lane today connects Perry with Ocean, parallel to Washington Street. 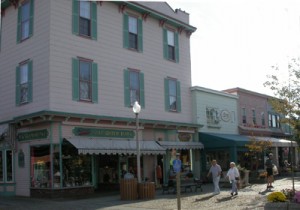 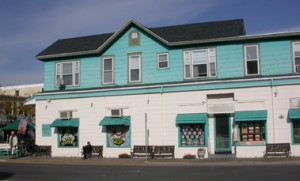 This area also includes inns and homes on the west side of Jackson St, some of the most picturesque in all of Cape May.

Shops and restaurants along Beach Ave. are also included in this sector. 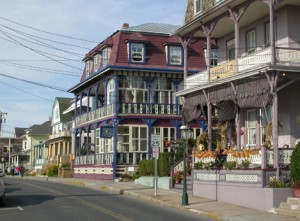 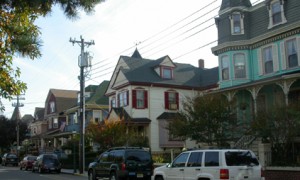 The 1878 blaze destroyed most of both sides of Jackson Street.  From where the former Poet’s Inn stands today north to Washington St. was spared on the east side of Jackson.  Below that point, the fire swept through to Decatur St. and beyond to Ocean Street.

Here in the early 21st Century, this block of Cape May includes many celebrated Victorian structures: the historic Virginia Hotel, (including the Ebbitt Room), the Carroll Villa Hotel (with the Mad Batter restaurant), Poor Richards Inn, the McConnell rsidence, the Merion Inn, the Goodman House, the Sugarplum Cottage and 3 more private residences.

Other important building that would be lost if the fire struck the same area today include The Tides Condominium Complex, a miniature golf course, the old Arnold Hotel which now houses Carney’s (both “rooms”), the Shirt Shops of Cape May, Sweet Things, Faria’s Surf Shop Cabana’s (both restaurants) and a number of apartments. 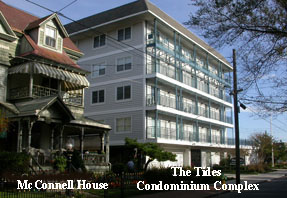 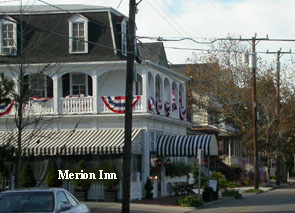 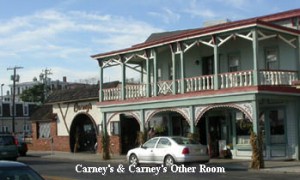 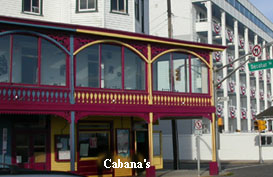 This block of Cape May is at the heart of the city. In1878 Hughes Street did not connect Ocean and Decatur streets. Today where Hughes intersects Ocean is the Cape May Library and one of her landmark B&Bs, Captain Mey’s Inn.

Across Ocean from Captain Mey’s the fire was stopped at the Pharmacy building which is now the home of Whiskers.

At the other end of Hughes on the beach side is the the First Presbyterian church. Adjacent to the church is The Manse. Part of the recently constructed Empress is across from them, along with four private residences.

One of Cape May’s best known inns, The Queen Victoria is at the corner of Columbia and Ocean Streets.

All of these now beautifully restored structures contribute to Cape May’s Historic Landmark status, and sprang from the ashes of the terrible fire of 1878. 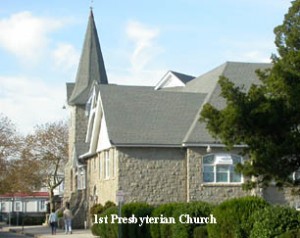 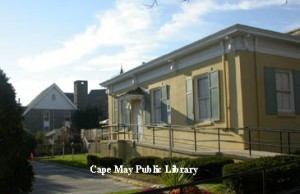 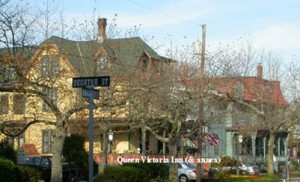 The entire beachfront of this section is occupied by the Marquis de Lafayette Hotel complex. Atop the main building is The Pelican Club restaurant an below the is outdoor Fin Bar.

Along Decatur, behind the Marquis parking area is the Elward House, a rental property and residence that has been in the same family for generations.

At the corner of Columbia and Ocean is the newly renovated Columbia House.  Next to the Columbia House are wo more of Cape May’s fine Victorian inns, the Celtic Inn and Leith Hall. These too were built on Ocean street in the late 1800s shortly after the fire. 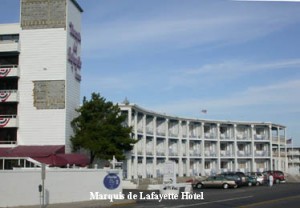 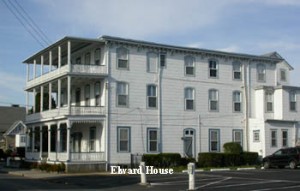 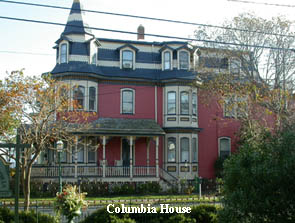 8. Ocean House, Beauclaire’s, Sea View House, the Inn of Cape May, Aleathea’s restaurant, the Avondale by the Sea  Motel 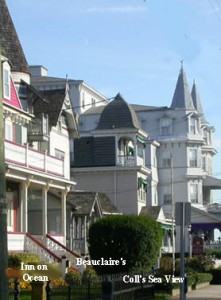 Completing the path that Cape May’s greatest fire took is Section 8. It extends along Beach Ave from Ocean Street to Gurney.

Here the domination of the Inn of Cape May (named the Colonial Hotel when it was first built) is hard to miss.  And adjacent to this meandering Victorian building is the modern Avondale by the Sea.

Today the stretch of Coean Street burned down in 1878 includes the Inn on Ocean, Beauclaire’s and the private dwelling Coll’s Sea View.

The fire was stopped at the lawns of the monstrously large Stockton Hotel which survived the fire in 1878 only to be destroyed  a few years later. 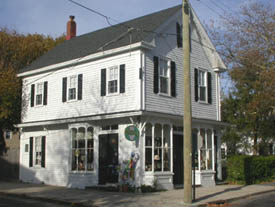 The potential losses today would be in the hundreds of millions of dollars in property alone. Not lost would be Whiskers, pictured left, the business that now occupies the same building that housed a drug store where towns people stopped the blaze from spreading further 125 years ago.