Those of us who live, work, and summer in Cape May make much ado about  the Victorian heritage of the country’s first seaside resort – and rightly so.

Cape May came into its prime during the Victorian era, and because of two fires, one of which occurred in 1869, and another more significant fire which occurred in 1878 and destroyed 35 acres of property, including many of Cape May’s prime hotels, Cape May, rebuilt making itself an architectural time capsule. The seaside town was designated a National Historic Landmark in 1976, thus beginning its second revival. But what was it like before the Victorians?

Well, way before the city folk of overcrowded Philadelphia conceived of the resort notion in the late 1700s, the Kechemeches (Kech-ah-mech-ees), a sub-tribe of the Lenni-Lenape, made New Jersey and Cape May County their seaside respite, along with the Tuckahoes. The Kechemeches fished and dug mollusks in the summer months. Their numbers were never very strong. It is estimated that the Cape May County Lenapes numbered between 300-500 until settlers brought diseases and threatened their small numbers. By 1735 the tribe had scattered to parts unknown, except for those who intermarried with the settlers.

The Kechemeches, a sub-tribe of the Lenni-Lenape

And although it is true that the first explorers to test the New Jersey coastline in 1498 were the Italians John Cabot and his son, Sebastian, sailing under the English flag, it the Dutch explorer Capt. Cornelius Jacobson Mey who led a flotilla of three ships around the cape in 1623- and thus christened it Cape Mey ( later anglicized to May) without, it is thought, ever having stepped onto land. After establishing a settlement near what is now Camden, he continued to sail up the coast to New York and assumed his duties as director general of the Dutch colonies.

It is the Dutch who introduced whaling to the area and thus created the first commercial industry in Cape May County. Whaling began in earnest around 1648 and lasted nearly a century. The Dutch whalers followed the herd down from New England and Long Island, eventually settling in Town Bank, Cold Spring. Most of whalers who made Cape May County their home earned their living as farmers between 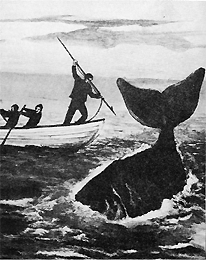 whaling seasons. Those whalers came to be the families whose names ring still today on the streets of Cape May and on the placards of historic homes which tourists visit by the thousands each year. Among them: Lemying (Leaming), Osborne, Hews (Hughes), Hand, Stites Eldredge, Skellens (Schellenger) Swain, Corson, and John Wilden, who, with his wife Hannah “laid the foundation for the claim that there are more Mayflower descendants in and emanating from Cape May County than Massachusetts,” according to authors Herb Beitel and Vance Enck who co-authored the book Cape May County – A pictorial History. Hannah was the granddaughter of John Howland, who arrived on the Mayflower despite having fallen overboard during the trip.

Cape May was known as Cape Island in the 17th century. Dr. Daniel Coxe owned all of the land up until 1689 when William Jacocks purchased 340 acres. Humphrey Hughes bought another 206 acres. Later Rendell Hewitt bought an interest in the land holdings. The three retained ownership until 1700. The land was primarily used for farming.

Cape Island Creek and marshes separated the island from the rest of the county in the 1600s but gradually the creek filled in and it was Cape Island in name only until 1869 when it officially became the City of Cape May. It was the over crowded and very steamy nature of Philadelphia in the summer time which led people to look to Cape May as a resort. Philadelphia became the Pennsylvania colony’s capital in 1682. By 1790 the population had grown to 42,000 and established the City of Brotherly Love as the largest city in the fledgling nation. It also had the busiest seaport. Many of the ships traveling the Delaware River heading for Boston or New York discovered the shores of Cape May.

For the first time people had the money, the time and the need to seek refuge by the sea and the areas whalers, fishermen, farmers and bay pilots saw the financial opportunity that presented itself. In Emil Salvini’s book The Summer City by the Sea, an advertisement which appeared in the Pennsylvania Gazette in 1766 reads as follows:

A Valuable Plantation, containing 254 Acres of Land, Marsh and Swamp, Part of the Swamp cleared, likewise 60 Acres of said Land cleared, the rest well timbered and watered, with a large good two Story House and Kitchen, a very good Barn and Stable and fine Garden; pleasantly situated, open to the sea, in the Lower Precinct of the County of Cape May, and within One  Mile and a Half of the Sea Shore; where a Number resort for Health, and bathing in the Water.

And so, 238 years after the Lenni-Lenape, the settlers, the whalers, the farmers, the fishermen, the pirates, and the Victorians discovered the joys of the seaside, visitors still flock here for the same reasons – sea-bathing, fishing and entertaining company.

*All black and white are from Cape May County: A Pictorial History by Herbert M. Beitel and Vance C. Enck unless otherwise noted.