Asking Sandy Sheller how she went about bringing the Gallagher House, circa 1882, back to its stately glory is rather like asking Michelangelo how he did the Sistine Chapel. There is no definitive answer – it comes from inspiration.

“I thought of it in layers- it was like a gestalt,” she said standing by the fireplace her arms reaching up as though touching the roof of the 3-story Jackson Street 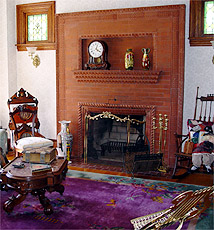 house. The house was built by the whiskey distiller Christopher Gallagher of Gallagher & Burton and is an example of Second Empire architecture.

“We (referring to her husband Steve, a Philadelphia attorney with the law firm of Sheller, Ludwig & Badey) knew we wanted to bring it back to its authentic Victorian past but we also wanted it to be light and airy.” Another important consideration, said Sandy, was to fashion a house the family (they have four daughters) felt was a home not a museum in which they had to carefully tread. She started with the outside of the house and picked up the color themes from there. She looked at the front garden – the greens from the foliage and the colors of May’s flowers.

In the living room, the inspiration came from the 1920’s Chinese area rug. The 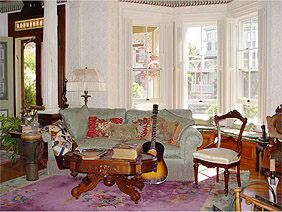 wallpaper, the furnishings, the textures of the room were chosen because they blend and accent the unusual pastel colors and patterns of the rug.

With each room, the visitor can see that a focal point, usually an area rug, sometimes, as in the case of an upstairs room a piece of customized furniture, is used to pull together the rest of the décor. Drapes, wallpaper, furniture, bed linens – all draw from a single focal point to make a complete, yet subtle finish to the rooms in the house. There are six bedrooms in total, numerous bathrooms, a living room, game room downstairs and upstairs and an expanded and modern kitchen.

When the front door opens, the interior of the house beckons, like Alice inviting the visitor to walk through the looking glass. The Gallagher house offers the visitor an invitation to walk back in time. Many of Cape May’s Victorian houses and B&B inns offer the guest that same invitation. This is, after all, a Victorian seaside resort, but what distinguishes the Gallagher house is that, although still licensed as a B&B, it is a private residence which evokes a powerful sense of place through the décor and an extraordinary attention to details.

Wandering into the game room a jigsaw puzzle is spread across the gaming table with four tapestry chairs around the table. One has the sense of intruding upon an imaginary gathering.

Upstairs in a small parlor a chess set is on the coffee table in front of a rattan cushioned settee. A secretary for some letter writing is in the corner of the 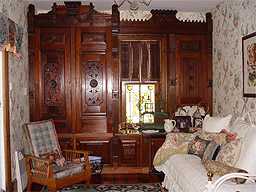 Each bedroom is furnished with period pieces. Lovely perfume bottles and dresser sets adorn the dressers and marbled tables.

Demonstrably present in the Gallagher house is Sandy’s ability to think out of the box. Mantelpieces found in salvage yards have been used to frame 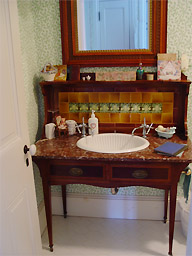 either the bathroom mirrors or the bathroom countertops. One of the upstairs sitting rooms includes a daybed and an armoire, which turns into a wall unit housing not only a stained glass window but a sink and marble countertop as well.

The stained glass windows, although original to the house, have, in several instances, been rearranged to better fit Sandy Sheller’s vision.

And, as her husband attests, what a vision it was and is. Steve Sheller was one of five owners of the Humphrey Hughes bought from Dr. Hughes’ widow back in the late 70s when Tom and Sue Carroll of the Mainstay Inn were about the only B&B owners in town. But the Shellers found that running a B&B from a distance proved to be more difficult than they had imagined. Soon they were thinking about a property of their own as a private residence.

About 10 years ago Sandy Sheller spotted the rundown Jackson Street property. It had been renamed The Gibson House, the story being that the 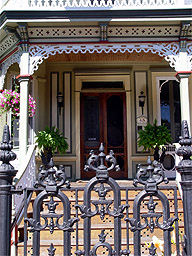 owner, who bought the house from the Gallaghers, had been a Gibson Girl back in the day. A Gibson Girl was the idealized woman of pen-and-ink illustrator Charles Gibson. The “Gibson Girl” became the early 20th century model for fashion mimicked by women and admired by men.

Mary Kramer ran The Gibson House as a “Bed & Board.” After Mrs. Kramer’s death, her son Herbert lived in the house until the late 80s, early 90s when the property went into bankruptcy.

When her husband saw the interior of the property, he shrugged with disgust, although structurally the house was sound everything else had gone to the dogs. Additionally the house hadn’t quite made the transition into the 20th century – everything from electrical wiring to indoor plumbing had been treated with some pretty imaginative innovations none of them in compliance with the present day codes.

But when Sandy looked at house, all she saw were possibilities. With a degree in

advertising design, Sandy Sheller has always been intrigued with interior design and the challenge of blending the old with the new. Formerly the art director for a large advertising firm, Sandy adjusted her sights to interior design. Former Sixer’s basketball star Moses Malone was one of her clients.

Steve Sheller recalls a time when they bought an apartment in Paris overlooking the Luxemburg Palace and Gardens. “Sandy decorated it in American Southwest,” said Steve laughing.

Standing at the kitchen sink preparing for their daughters’ homecoming, she cocks her head as though trying to remember. “Well the décor there was so formal and ornate,” she explained, that she thought a little rebellion was in order and that she would bring something different to the French interior decorating landscape.

Redecorating the Gallagher house took a total of nine months. The dark wood was lightened to give the rooms an airy feel. All the plumbing was replaced and properly connected and the electrical wiring completely redone. A back staircase leading to the kitchen was built in case future owners want to use the house as a B&B. Sandy credits the people she had helping her with the restoration as being instrumental in getting the job done and done properly.

The kitchen is expansive and modern but oak cabinets as well as antique fixtures keep the Victorian décor consistent with the rest of the house. Prominent in the kitchen is an old placard from the Gallagher & Burton Whiskey Distillers. Steve Sheller’s father sold Gallagher & Burton whiskey in the liquor store he owned in New York City.

The Victorians have always fascinated Sandy especially their ability to creatively deal with the practical. For example, she points out that the long 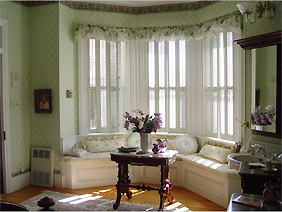 mirrors so typical in Victorian houses are actually petticoat mirrors designed so that women could, at a glance, make sure their petticoats weren’t showing.

Sandy Sheller’s fascination with the Victorians and her own ability to creatively blend the old and new – the 19th century with the 21st century has brought the Gallagher House back to life in way befitting a grand dame of Cape May.