Guess what? My boss sent me up in a banner plane this month. He even offered to drive me there. I’m sure it’s a perk for a job well done. So, let me tell you about it.

We turned into a long driveway with a blue farmhouse on Route 47 in Green Creek. That’s the home of Paramount Air. Andre and Lois Tomalino started the business in 1945. Andre was a fighter pilot in WWII. Afterwards he returned to Upper Darby, PA and flew banner planes in Philadelphia, mostly over racetracks and stadiums but he knew the place to be was the Jersey Shore.

Now, nearly 60 years later, Andre and Lois hold down both offices (one in the farmhouse and the other at the hangar) and their daughter Barbara runs the operation with her husband Jim Dahlen. 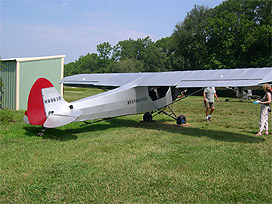 Jersey Shore aren’t exactly the original planes they started out with but they’re pretty old. The baby of the bunch was built in 1956.The one I’m going up in was built, according to Jim, in 1946. Andre thinks it’s more like 1942.

I’m not at all nervous because Jim says he just worked on the plane and it’s running fine now.

“No stars, no electric,” said Jim patting the plane. Just point and go. Speaking of pointing, Jim is pointing to a wire stick. “If the stick is all the way up, we have gas. If it’s all the way down, we’re out of gas.”

“I don’t know exactly how to say this,” says Jim, “But we recommend you dehydrate.”

“Do you have to go to the bathroom? Because it’s very bouncy up there.” 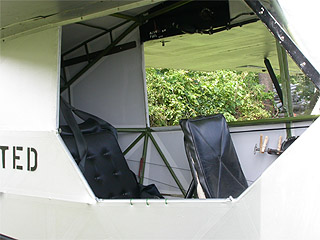 So I drive back to farmhouse because the port-a-potty by the hangar doesn’t look too inviting. Lois points to a very lovely bathroom. As I’m leaving she says, “You’ll be fine and don’t worry about it not having any doors. That’s nothing to worry about.”

Back at the hangar, I’m looking at the plane. It seems very, how shall I say, small. There are only two seats, no windows, no doors, and I can’t quite figure out how I’m going to get in the thing. I really don’t want these guys shoving my derrière into the back seat. When in doubt – don’t think – just plunge ahead. I grab onto the thingy on the plane and step onto the wachamacallit and swing my leg around the giant gearshift and down I plop. Great! First mission accomplished. 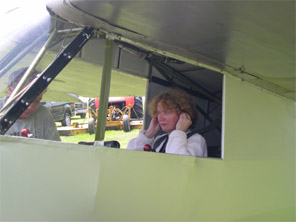 seat and I could mess things up. Also, mental note to myself, as I’m looking around, do not touch the thing that says throttle – I figure that must be important too.

Jim, is very nice and suggests that I should wear a sweater and maybe take my glasses off. Also, he hands me a package of earplugs and shows me how to get the most use out of them.

Now the glasses – that’s a problem, because, well, how do I say this? I can’t see. On the other hand, I don’t 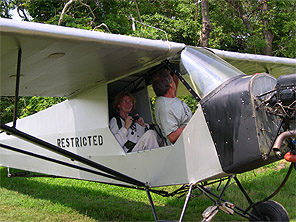 want my glasses to land in the bay either. Decisions, decisions. Off go the glasses. Now how am I going to take pictures?

I look at the camera – yes –it’s set on automatic – so I guess I’ll just point and click.

“Do you have any questions?” asks Jim, “Because once

we’re up in the air there’s no verbal contact.”

“Prop me,” says Jim to Mike. He flips the propellers but the engine doesn’t click. Jim fusses with the throttle.

“Contact,” says Jim. Still no go. I’m not really nervous or anything about the engine not starting right away. I’m OK. After two more tries, the engine starts and we’re off.

We have no banner because we’re not an official flight. If we were, we’d have a long banner tied with 200 feet of rope to two 6-foot poles promoting beer, a jam session, and personal messages like “Vote for me,” “Will you marry me,” “Congrats on your graduation.”

We’re now lifting off and my ears are lifting off as well. WOW! What a racket! My boss is waving good-bye with such a big smile on his face. He’s really happy to see me take off.

The airstrip is bumpy, grassy, and doesn’t really look like a landing field.

A few minutes into the air, I feel some kind of pain going through my arm when I realize that I have a death grip on the brackets. Oh my gawd. My fingers are numb. Speaking of fingers…

Jim is showing me four fingers. I realize much later, like when we’re on the ground, 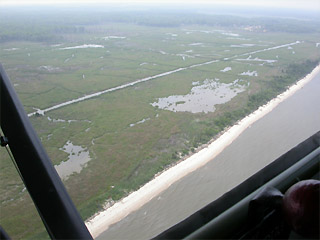 that he must mean we’re 400 feet in the air. A few minutes later, he’s pointing down into the bay. I’m guessing he sees something photo-worthy like maybe dolphins. I get the courage to point my camera in the direction he’s pointing. I see the white splashes but I do not see the dolphins. I’m lucky I see the water. Later, when I look at the pictures, I realize I’ve photographed my knees because I didn’t lean out far enough.

Get a bloody grip on yourself, I say to myself.

When I start recognizing the coastline and realize I’m over North Cape May and the channel, I finally look over to my right – my left was scary but easier because there’s something separating me from the water. On the right is – well, water. 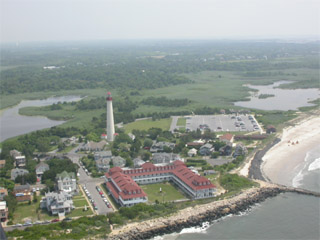 When I see St. Mary’s By The Sea retreat home at Cape May Point, I am at last filled with picture taking excitement.

Oh. Wait a minute, the setting on the camera isn’t right. Let me see. No that’s not right. I can’t see, you see. Can we stop a sec? Never mind. Now I have it.

Where did all those hotels come from? I didn’t know we had a Ferris wheel in Cape May. Hold on here. I think we’re flying over the Wildwoods.

Well, hell’s bells is all I can think to say. Let me just sit back and enjoy the rest of 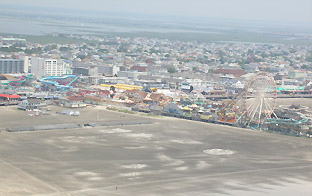 It’s actually very peaceful up here. I’ve been so busy looking down, it never occurred to me to look up. The sky was very hazy earlier but now it’s picture perfect. Ahhh. At last I can relax.

Whoa Nellie!! What’s going on here? We’re rocking, seriously rocking. Don’t panic. I’m not scared. I believe in karma. I believe in fate. I believe the bloody engine is stalling.

“I am heartily sorry for all my sins.”

Oh. Never mind. Jim’s just making a turn so we can land. I knew that. I told you I wasn’t scared.

Whew! Back on the ground again. My boss looks surprised to see me.

Well. All I can say is Paramount Air is a very cool place run by very cool people – like Joe and Tom and Matt and Mike and of course, Andre and Lois and Barbara and especially Jim – who was so very nice to me.

And know this – when you see a banner flying over the friendly skies of Cape May – it’s Paramount Air at the controls.

It looks so simple.

Looks are deceiving. There are no voice communications. No walkie-talkie, no air traffic controller, no radio. Just a wing-tip wave for “yes” and a yaw (left and right swing) for “no” – and a checkered flag for the ground crew to wave before a sign is launched. And the process is purely mechanical, rooted in 50-year-old technology

But everybody gets it. They understand what they’re doing. Today the ground crew is Mike Sweeney, Tom McDonald, Dave Bates and Matt Sobel. They know what their tasks are and they have their signals straight.

The plane, a well maintained Piper Cub from the 40s or 50s has few controls. On the right side of the pilot’s seat is a lever that the pilot uses to release a bar that hinges downward from underneath the plane. The bar has a simple mechanical hook that can be opened or closed by the pilot. It’s that hook (maybe an inch in diameter) that snags the lead rope that will peel a sign off the ground in what seems like a slow motion instant.

On this particular humid June morning, the ground crew has laid out a couple signs, one lettered and one banner. On an active day they may launch as many as 40 signs and banners, each for a separate flight. But no matter how many, the routine is always the same.

Near the end of a grassy, slightly upgraded, slope the crew lays flat a series of nylon ropes which could be as long as 200 feet. Within the sign section of the rope, nylon letters are interwoven to make up the message.

Once properly laid down, a crew member sets up the snag line between two poles about 7 feet off the ground. The snag line is part of the lead for the sign itself.

Then a member of the crew signals the pilot with a flag wave that it’s ready to be picked up. The pilot, who is already airborne, circles, drops altitude, releases the lever with the hook and swoops over the poles just low enough to snag the lead rope. He closes the hook remotely (mechanically – nothing electronic here at all, including the plane’s starter) and forces the plane to pitch skyward on a steep angle. The sign literally peels off the ground and is ready to be noticed by the world.

At the end of the trip the pilot makes an approach over the airstrip, opens the hooks and releases the sign where it falls lightly back to the ground.

And effective in its results. Lying on a beach in Cape May, with the buzz of a Piper Cub overhead, who can easily resist a look at the plane… and at the message?