It is a quiet, peaceful afternoon at the beach. You are sitting in your beach chair, waiting for the tide to rush over your legs, thinking, maybe you should move your chair back a bit so your stuff doesn’t get wet when, suddenly, whistles are blowing, lifeguards are running and pulling everyone out of the water. And you’re thinking, what is this all about? Probably some kid mistook a dolphin fin for a shark. But then, you see a crowd forming and more lifeguards running. You are filled with a sense of alarm as you see all the lifeguards forming a human chain in the water. You see flailing arms way out in the ocean so far you can barely tell that they are the arms of a grown man.

That’s when it hits you – this person is drowning and these people – these lifeguards that you laugh and joke with every day – are this man’s ticket to life or death.

Now the sirens start and between the swimsuit clad bodies of the other beach goers who have crowded around the scene, you see the body of a middle aged man lying there –lifeguards checking his pulse to see if he is still breathing, others are administering oxygen.

That particular afternoon’s drama had a happy ending – EMTs rushed him to Burdette Tomlin Memorial Hospital for observation and the man did live.

So, how does a pleasant afternoon swim turn into a life and death rescue?

One of the lifeguards present at this particular rescue said it is pretty much always the same scenario. Ralph Atwell has been a member of the Cape May Beach Patrol (CMBP) since 1965. 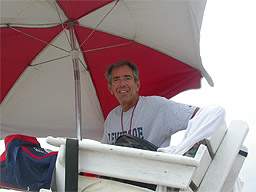 Black clouds are all around us. Sunday beach goers are waiting to see if the rain, which has just stopped, will come again. Undaunted, kids are already going into the water.

“Do you see the wave the shoreline makes as you go along the beach?” says Atwell “You can see rip currents the same way. They make a path right up through the water. And the water becomes discolored. A rip current is the water washing out. How bad the current is depends on how strong the water is moving away from the shoreline.”

Some afternoons it seems as though the lifeguards are constantly blowing their whistles. When they spot a rip tide, and often there can be several within a small area, the lifeguards try to move swimmers either to the right or to the left of the rip current.

“Really,” says Atwell, “Our job is to prevent rescues.” But when there are too many people in the water, the chances are very likely someone will get into trouble. Getting into trouble, however, doesn’t always result in the person having to be rescued.

“What happened to the man on Thursday,” said Atwell, “is that he started to panic. If you’re a strong swimmer you’ll get out of it.” For one thing, the swimmer who runs into a rip current could swim further out because the current dies out in deeper waters or you could swim to either side of the current. “In this instance,” said Atwell, “the man panicked and took on a lot of water into his lungs.”

And just as he says this, another lifeguard spots a rescue one beach down.

This is an easy one, not, cautions Atwell, that any of them are easy – “Anytime you start to swim out to someone there’s a risk involved.”

It was Stephanie Budd, a student at Wildwood Catholic, to the rescue and she needed no assistance. A woman, she said, “got caught in a rip” and within two minutes she was back in.

The swimmer who doesn’t panic fairs best. If they can just tread water and not fight the current, the lifeguard can swim out alone and tow them in.

The CMBP uses a “torpedo” to bring swimmers in. It is an orange-colored plastic cylinder which 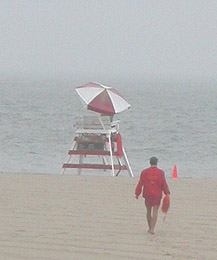 the lifeguard brings with them to the rescue. The reason? Insuring the lifeguard’s survival as well as the swimmer’s.

One lifeguard, who recently participated in a rescue, swam out to the man in trouble. When she reached him, he immediately grabbed onto her neck pulling her down into the water.

Atwell smiled, acknowledging he too has been on the receiving end of a drowning swimmer. Hence the purpose for the torpedo – it gives the swimmer something else other than another human being to hold onto.

“Sometimes though”, says Atwell, “the rip takes you out so fast that you’re in front of the person before you have a chance to swing the torpedo over to them because the same current that takes the swimmer out helps you to rescue you them.” Atwell remembers a time when a very large woman got into trouble. He reached her before he could extend the torpedo and she grabbed onto him pulling him down into the water. “People just grab onto whatever to save themselves,” said Atwell. In this instance, Atwell went back down into the water with the woman and she immediately let go. Under the water is the last place a drowning person wants to be.

Just the day before, 20 lifeguards formed a human chain with their torpedoes to rescue a ten-year-old boy down at the Cove Beach. It took over 20 minutes to bring him in but the rescue was successful. 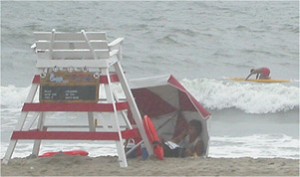 CMBP, under the direction of Harry “Buzz” Mogck (pronounced Moke), frequently simulates rescue operations during the summer weeks to make sure his team is fit and well rehearsed. Gene Ladd of the CMBP said that statistics regarding rescue operations are tallied under two different categories – a “full-blown rescue”, in which each lifeguard along the beach leaves their stand to assist, leaving one lifeguard (not the usual two) in attendance – and a “sneak” rescue which only involves one lifeguard who swims out and brings the troubled swimmer back in.

CMBP averages between 5 and 6 full-blown rescues a day and 25 sneaks per day. Two years ago, they had 26 rescues within a two-hour period and were forced to close the beaches because the lifeguards simply couldn’t keep up with the demand.

Atwell, whose eyes are always on the water then he talks, said that the job of a lifeguard is physically demanding. Take the rescue Saturday, he says. His stand is one over from Grant Street. “Now I have to run all the way down to the Cove and then swim out to sea and then help drag someone in. You’ve got to be fit.”

So the moral of the story is – be nice to those guys and gals on the lifeguard stands – the life they save could very well be yours.