Call me Ishmael. No, no. Call me S. Tischler. 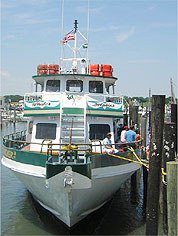 Some days ago – never mind how long precisely – having little or no money in my purse, and nothing particular to interest me on shore, I thought I might hop a ride on the Whale Watcher II, aka, “The Big One.” The ocean is a way I have of driving off the spleen, and regulating the circulation. Whenever I find myself growing grim about the mouth; whenever it is a simply gorgeous day and I can abide my office no more; and especially whenever my hypos get such an upper hand of me, that it requires a strong moral principle to prevent me from deliberately stepping onto the Washington Street Mall and methodically knocking people’s hat’s off – that is when I think I’ll take the three hour cruise and search for the elusive whale Slammer.

With a philosophical flourish Cato throws himself upon his sword; I quietly take to the Whale Watcher II.

The day is beautiful and the waters are going to be, according to Captain Miles, “very calm.”

I board the vessel at shortly after the noon bell and immediately go astern (toward the back of the boat) to climb the short set of stairs to the top deck. 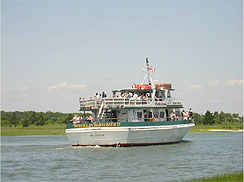 I’m looking over the side of 90-foot aluminum boat when I see Captain Paul, who is second in command of this seaworthy vessel, standing in the wheelhouse. The naturalist and tour guide on board, Christina, is also on hand. She said there were nurseries of dolphins along the shoreline. Care I about cute little dolphins? Nah. It is the Slammer I seek. She seems to be speaking in soft tones the way you would speak to a child. She tells me that other boats in the area are also looking out for whales and would alert the Whale Watcher II if they spotted any.

Captain Paul is leading us out of the dock and into the canal with Captain Miles as his guide. We are advised not to feed the seagulls so they don’t eat a bunch of blueberries and poop all over the poop deck. 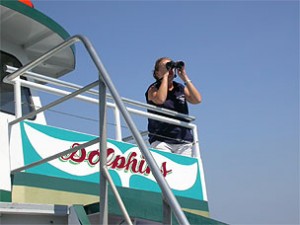 He looks at me askance and turns his binoculars to the open waters.

The skies are clear blue. The only swell in the water is the one the boat makes. And it is a day of inspiration for other seafaring folk as well. There are many boats on the water this day – sailboats, fishing boats, commercial fisherman, dinghies, and sport fishing boats. As we pass the U. S. Coast Guard Base and round the shoreline at Wildwood Crest, Christina gives us a “thar she blows.” 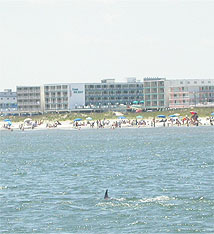 I turn toward the bow (the front of the boat), my camera in hand; thinking this is the moment. Now I shall see “The Big One” and capture it on my lens for all the world to see. Aye but mates it is but a nursery of dolphins that has been spotted. And the poor guide Christina is forced to use landlubber language. The dolphins aren’t at the port, the bow, or starboard – they are at 12 o’clock, six o’clock and nine o’clock.

It’s very crowded at 12 o’clock – Capt. Miles must be thinking of making his crew walk the plank – oh I see. The passengers are crowding the bow to get a closer look at the baby dolphins. The waters are warmer this summer, says Christina, so the mommy’s and nannies are keeping the wee ones closer to shore and away from predatory sharks.

Suddenly I see the fin.

“Aye, breach your last to the sun Slammer! Thy hour and thy camera are at hand. Down! Down all of ye, but one man at the fore. The boats! – Stand by!” I yell at the top my lungs. 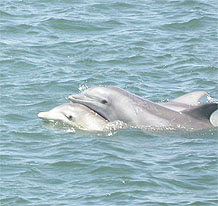 Christina tells me it is a dolphin not a whale. Dolphins, actually. Atlantic bottlenose dolphins swim in pairs or in pods. There must be 50 of them. For a few moments I am distracted from my mission and I watch these sea creatures. When they do their synchronized swimming routine, they look like a chorus line of dancers. Christina has names for them – There’s Tippy, who’s been summering in Cape May for 16 years and is the queen mother, and Nubby, Quasi Motto, and Camel who are also regulars to the Cape May seashore.

I keep trying to get their picture when they come out of the water and I’m never fast enough – I’m so busy running back and forth underneath the stairwell that I nearly crash my head into it. Maybe I should just stay still. So I do. Stay still that is. By this time I can see the Wildwood roller coasters in the distance. Finally I get a shot of them. The teen dolphins are plunging in and out of the water. The baby dolphins stay a little closer to their elders. 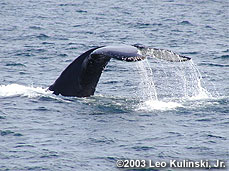 Get a hold of yourself mate. I say. You must not be dissuaded from your appointed task. You have an appointment with destiny in the form of the Humpback Whale. The captain agrees because we are venturing forth into the deepest parts of the ocean.

Other poets have warbled praises of the soft eye of the doe, and the lovely plumage of the Eagle; less celestial, I celebrate the tail.

Each Humpback tail is different. Scientists have identified individual whales in Tonga by photographing their tails. And the Humpback Whale can be spotted by their actions like jumping and tail slapping. When courting, they are known for their detailed love songs, which are sung by males. They usually hang vertically in the water as they sing. They are, on average, 45 feet long and have a life span of 77 years.

Dissect him how I may, then, I but go skin deep; I know him not and never will. But the picture is the thing. If I only have one shot let me make it a tail shot.

I’ve worked up quite a thirst and I think I’ll drop into Harpoon Hanna’s for a cold one. Whoops! No money. I have my camera. I have my notebook. I even have a pen, two in fact – but I have no money in my purse. The woman behind the counter is serving a nice, tall Coca-Cola with sweat forming on the side of the cup to the many customers in front of her. The fragrant aroma of frozen pizza fills the air and I lift my nose up to breathe in fully the smell as though it will satisfy my hunger. 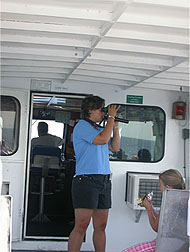 Well, it’s for the best. Drink and food will spoil my senses, dull them, leaving me vapid and languishing. I think I’ll go topside and continue my search. The excitement of the dolphins has worn off and the other passengers are settling in for the next adventure. When I look about me, I can no longer see the shoreline and Christina is pointing out some of the pelagic birds that follow the whales. Whales, she tells us, have lousy breath. How she knows this is beyond me but I’m thinking I won’t be asking that question – some things are best left a mystery.

I think about joining the crew in the wheelhouse. Instead I sit down and lean against the railing and wait for Slammer to appear.

It’s so quiet. All the passengers are sitting back and enjoying the beautiful day. As I look down at the deck below, couples are also leaning against rail, content to watch the sea as we move further out in search of the illusive Slammer.

The water is so calm, so soothing, so tranquil, so….

Whoops! Nodded off there for a minute and I suspect a few others on the boat have too.

Well, hard as Christina, Jenn (the other naturalist) and the rest of the crew look for whales, it does appear as though there will be no Slammer sighting today because The Whale Watcher II is heading into shore.

The ship tore on; leaving such a furrow in the sea as when a cannon ball, missent, becomes a ploughshare and turns up a level field. 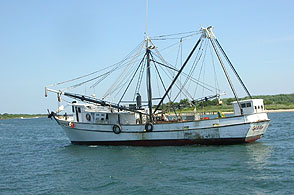 But the thing to notice, are the sights that we forget about so often. Cape May is more than beaches. Commercial fishing boats are also making their way home. We pass the Wildlife Bird Sanctuary, the U.S. Coast Guard Training Base (the only one in the country), and the wetlands, seemingly springing from nothing.

The drama is done and even though I did not see the Slammer, an afternoon spent at sea is an afternoon well spent.

Editor’s Note: Many thank to the crew and captain of the Whale Watcher II. The Cape May Whale Watch & Research Center is located at Wilson Drive and plays host to several island cruises a day.

Also many thanks to the obscure English author Herman Melville for his able assistance in writing this piece.