Is it the house at 653½ Washington Street, also known as The Colonial House? Or is it the old “Whilldin-Miller House” at 416 South Broadway where Daniels on Broadway Restaurant currently resides?

Can CapeMay.com’s architectural detectives solve the mystery? (Probably not, because we can’t even figure that whole Beach Avenue/Beach Drive thing.)

Nevertheless, we’re on the scent. To aid us in our investigation, we’ve adopted some helpful hints from the good folks at PBS’s show History Detectives. Their website www.pbs.org/opb/historydetectives provides a “Buildings Checklist” in helping with an architectural investigation.

The checklist, which by the way, coincides with recommendations formulated by the Secretary of Interior’s Standards for the Treatment of Historic Projects, offers the following advice:

Get Familiar by learning the local history i.e., read newspapers from the construction year and do your homework by scrutinizing house details including additions, artifacts and construction.

Get It In Writing. Translation? Do a title search, check tax assessment records, and research building permits.

Get Personal. Learn who the previous residents and/or owners were; talk to the neighbors; get oral histories and check estate records, personal papers, birth, death, and marriage certificates as well as cemetery and church records, and census records provided by the state or federal governments.

Manned with our checklist, we’re ready to get to the bottom of this mystery and to assemble our team of experts.

Our experts include James Campbell, historian at the Greater Cape May Historical Society and Joan Berkey, historic preservation consultant. Berkey authored the Whilldin-Miller House (Daniel’s Restaurant, AKA, The Fow House) nomination report seeking to have the house placed on the National Register of Historic Houses. The house was placed on the National Register in 2003.

Determining the age of the building, particularly a single family dwelling like Colonial House and the Whilldin House is a dicey proposition.

Most of the inquiries Jim Campbell receives at the Greater Cape May Historical Society are from new home owners wanting to trace the lineage of their property. Because of the lack of documentation, it’s “very, very difficult” says Campbell, to precisely determine the age of many of Cape May’s historic homes, particularly those which predate the Victorians like the Colonial and Whilldin House.

Campbell recommends checking the deed to the property. However, the deed to a property, he says, only outlines the perimeters of the property and really doesn’t say whether or not a house was built on the land. For that information, he suggests trying to get hold of mortgage books or tax records. A spike in the property’s tax assessment, said Campbell, is a good indication that a building or house has been constructed on the land. Oral history is also helpful although even not conclusive evidence. 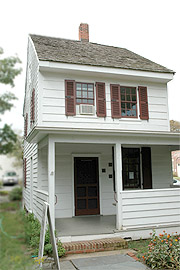 When all is said and done, determining the age of a house often comes down to the construction and the materials used.

Colonial House is the favorite project of Jim Campbell. It was built by Revolutionary War patriot Memuchan Hughes and is believed to be the oldest house still standing in Cape May (built around 1775). The Colonial House was run by Memuchan Hughes as a tavern and also served as his family home. Currently, it is City of Cape May leases the property to the Historical Society, which operates the house as a museum and is open to the public in the summer.

Memuchan Hughes was a member of one of the whaler yeoman families. When Israel Hughes, Memuchan’s first son married Mary Eldridge in 1806, the simple six room tavern became their home.

Although local lore dates the Memuchan Hughes house at 1775, a recent inspection of the house by an architectural historian dates the house to “around 1800.” 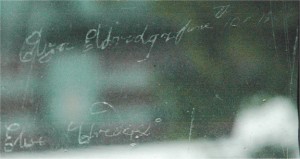 Elizabeth's name scratched into a window. Click for larger image

According to a brief history written by Campbell, “Scratched on the outside of a second story window pane are the names of a couple and dated June 10, 1806. One is Elizabeth Eldredge. The other Eldredge’s first name is illegible. A couple named Enoch and Elizabeth Eldredge were married in the Old Brick Church on February 19, 1805, and are buried in the churchyard. Enoch’s sister married a son of Ellis Hughes. They were all one big, happy family back then.”

On the other hand (one thing to note: for history detective there is always an “on the other hand”), Rutgers professor and author Jeffrey M. Dorwart, writes in his Cape May County, New Jersey: The Making of an American Resort Community, that there were “at least three licensed public houses, and probably one unlicensed house of entertainment–the Cape May County grand jury indicted Memuchan Hughes in 1799 for causing a public nuisance” and running a disorderly house (brothel). This information, documented in court records, supports the thought that Colonial House was indeed built around the Revolutionary War or at least prior to 1800. 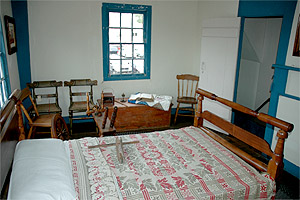 Furthermore, there is evidence, according Greater Cape May Historical Society president Harry Savage, that a tavern license was issued to one Memuchan Hughes in 1769.

Architecturally though, the historian found that the timbers and the nails used in constructing the building were more in keeping with “around 1800.”

So, the disagreement continues. As a compromise, the historical society’s new sign calls the house both The Colonial House and the Memuchan Hughes House. 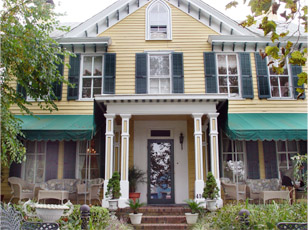 Let’s move on to our other property in question – The Whilldin-Miller House, AKA Daniels on Broadway Restaurant, at 416 South Broadway.

The property is actually located in West Cape May and was built by Joseph Whilldin somewhere around 1711-1718 with an expanded addition built by Jonas Miller in 1860. Whilldin was also a member of the whaler yeoman families.

As the story goes, Whilldin bought the property from Chief Nummy whose tribe owned the land.

According to historic preservation consultant Joan Berkey, the house consists of three parts: the main section “which is a vernacular Victorian building with Gothic and Italianate details built ca. 1860, a heavy timber frame section, 1 ½ stories tall, built in the early 18th century” and located in the rear of the house, and a modern one-story addition where the restaurant is located. 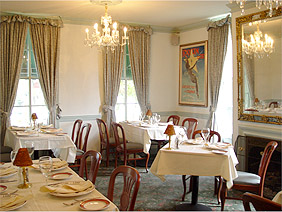 Berkey notes that the main section of the house “has a rectangular footprint and features original wood clapboards, original windows, and original exterior and interior Victorian details.”

The reason the rear section of the house is thought to date ca. 1711-1718 is again because of construction and construction materials. “The heavy timber frame section of the rear also has a rectangular footprint and features exposed framing members (some of them molded), random width pine floors, many original doors, and a large walk-in fireplace. Adjacent to the fireplace is a cooking/warming oven, a feature rarely seen in Cape May County.”

Berkey notes that the “framing members” as well as the “molded post” are characteristics “common to the first period construction in Cape May County.” That period is thought to have begun in 1695 and run through 1730 or 1740.

Berkey has really done her research and traces the family history of the house in great detail.

After Joseph Whilldin’s death in either 1747 or ’48, his son James inherited the property and 140 acres. It looks as though he expanded the house to include a center hall and center chimney and a double parlor. Joseph Whilldin, like Memuchan Hughes, was granted a tavern license in 1764,’65,’67, and ’68. 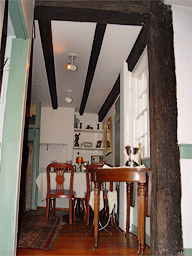 His son James inherited the property upon his death in 1780. James sold the house to Jeremiah Bennett a sea captain in 1798. The Bennett heirs sold it to Jonas Miller in 1841. Miller had already purchased Congress Hall in 1835 and is credited with adding the Italianate main block shortly before selling the property and four acres to his daughter Sarah Newkirk, wife of Philadelphia hotel owner Thompson Newkirk. The purchase price? $3,000.
This is the kind of spike Campbell says to watch for because it indicates, as Berkey notes, that a “substantial house has been erected.”

And where did Berkey find this information? It looks as though she followed the history detectives checklist to the letter, as well as Campbell’s suggestions. Deeds, wills, and physical evidence are the key to unlocking your historic house’s secrets.

So, where does that leave us? When asked what he thought the oldest house in Cape Island is Jim Campbell said, “I couldn’t say which is older.”

And that Beach Drive/Beach Avenue thing? Also a win win. Both sides of that fence swear they’re right and you know what? They probably are.