Consider the Monarch Butterfly. It begins life as a caterpillar living underneath the leaves of the milkweed plant for a couple of weeks. Then, it forms a letter J and hangs out under a sheltered area forming a big green glob for about 10 days, after which, it emerges as a breathtakingly beautiful orange and black butterfly. Next mission? Go to Mexico. The Monarch travels more than 2000 miles beginning in late August to reach its winter home in 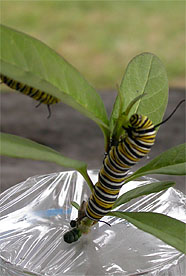 Florida, Texas and Mexico. The great Mecca of Monarchs is El Rosario, Mexico where they hibernate clustering together with other Monarchs in groves of oyamel fir trees that are 10,000 to 11,000 feet above sea level until March. With the advent of spring comes the mating season. The Monarch flies back to North America- the land of the more plentiful milkweed plant. Few survive the trip but those that do lay their eggs, thus insuring the species survives. Some non-migratory Monarchs stay in the more tropical climates but as many as 10 million choose migration.

The average life span of a butterfly is one month, maybe six weeks. The Migratory Monarch however, by virtue of the fact that it takes the risk of traveling so far south, extends its life by four more months. It lives just long enough to find the closest milkweed, mate, lay its eggs and then perish. Once the Monarch offspring reach more northern climates like Cape May, they reproduce two or three more generations before autumn arrives and their southerly migration begins again.

Just like the raptors and other birds, the Monarch finds Cape May and Cape May Point an attractive stopping off point to rest, regroup, and wait for the right winds to carry it forward on its amazing journey. 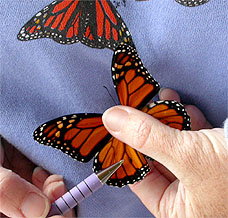 The Cape May Bird Observatory (CMBO) at Cape May Point has been charting the Monarch’s path for the past 14 years. This year has been particularly disappointing for people like Paige Cunningham and Louise Zemaitis, field coordinators for the project. A standard census count is made three times daily between September 1 and October 31. Thousands of Monarch Butterflies are tagged each year in Cape May. In southern Cape May County an average of more than 75 butterflies have been tagged per hour. The best year was in 1999 when 328.56 monarchs were registered in one hour. The worst year was in 1992 when 10.41 were counted per hour. 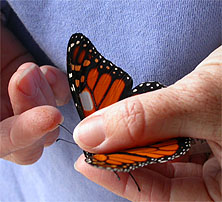 The census takers count, tag and weigh each Monarch. Census takers travel a five-mile route each day, three times a day from Higbee Beach, up New England Road, down Bayshore Road to Sunset Blvd. and ending at Alexander Avenue.

Seaside Goldenrod is the Monarch’s number one nectar source and thanks to anti-beach erosion techniques plenty of it is now growing in the dunes of Cape May and Cape May Point but Zemaitis and Cunningham encourage residents to keep planting those butterfly bushes and help in the count either by calling in data found on butterflies in their yard and/or adopting a butterfly. For $25 you can adopt a tagged Monarch. In exchange, you receive a certificate with the tagging details of the Monarch you adopted. If the Monarch is found and identified along the way to Mexico, the adoptive parent receives another certificate chronicling its journey. On a cloudy day in October, two weeks before the census was to end, CapeMay.com took a trip to the picnic pavilion at Cape May Point State Park where Zemaitis and Cunningham are holding a Monarch tagging demo. The demonstrations are held Friday through Monday and Wednesday, September 25 through October 20 at 2 p.m.

It’s a hands-on demonstration which even on this cold, bleak day is fairly well attended. Zemaitis and Cunningham are good at bringing an urgency to the Monarch’s story. As they remove the delicate butterfly from its envelope and it begins to flutter the two women show us the difference between a male and a female. They ask us to touch its abdomen and let its legs touch our hand. 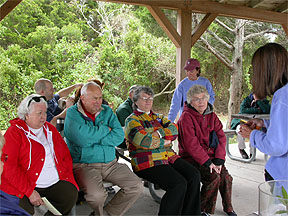 Now it’s time for the Adopt A Butterfly portion of the program. But hello, it seems one adoptee doesn’t want to fly away. Can’t blame her. It’s cold and windy but she better fly away soon because it’s going to get even colder in the coming weeks. With a little help from her friends, she warms to the task and fly away she does.

As we stand watching her flutter away, turn toward the bay, and then say no – not today – and turn back toward the trees – you can’t help but say a little prayer in the hope she makes it all the way to Mexico.