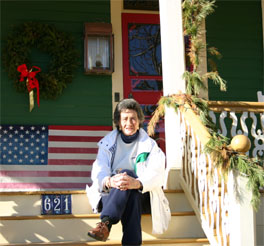 In a year when Cape May has been a whirl with changes in the accommodations arena,  one Columbia Avenue address remains constant – The Delsea.

The gingerbread-coated house has had the same owner since 1969. In fact, Rosemary Stumpo is only the fourth owner in the Delsea’s 137-year old history.

Like many who settle in Cape May, Rosemary was looking for a change. As the sportswear buyer for John Wanamaker and Casual Corners in Philadelphia, she’d tired of those tedious trips to Italy and Paris and was looking for a simpler life. 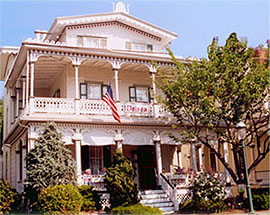 “It was very different here in Cape May in those days. There were only rooming houses here. No B&Bs. No one knew what that meant. This was the first house I looked at.”  Rosemary called the realtor and said “How’d you like to sell me a house?” The realtor said “Sure. Just go up to the house and ring the doorbell.” Rosemary laughed, “Can you imagine doing that today?”

Her brother scoffed when he heard his sister was about to become a guest house owner. “You never made your bed when you were home, why would you want to make your living making beds?” He said.

She charged ahead anyway and took it as a good omen when she woke up Memorial Day Weekend to the sounds of the U.S. Coast Guard’s 21 gun salute. “I slept in the front bedroom,” she said, “and I woke up thinking someone was shooting at me.” Undaunted, she went to settlement the next week. 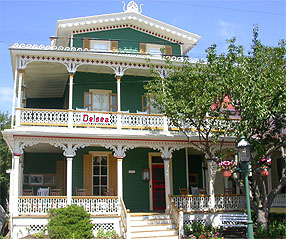 The Delsea after renovations

“I had three glorious summers,” she recalls. Her main occupation? Beachgoer. She started out that first summer with five seasonal reservations. Among them was a Scottish couple. When someone would come along and want to rent an available room, the Scottish gentleman would walk down to Steger’s Beach where Rosemary hung out and fetch her. From the get-go, Rosemary had an easy breezy approach to running her guest house. She provided guests with juice and coffee in the morning. People could come and go as they liked. If they wanted to sit on the front porch and chat, Rosemary would accommodate. If they didn’t feel like socializing, that was fine too. The house was always full and the guests came back year after year.

“We’ve have couples who have met, married, had children, had grandchildren and every summer returned to the Delsea.” 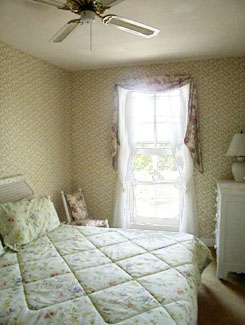 One of the Delsea's bedrooms before renovations

Up until this most recent re-do, none of the rooms had heat but Rosemary kept the Delsea open through Victorian Week. “I simply told the guests they were welcome to stay. We had plenty of blankets but no, we had no heat. And we were always sold out.”

After the third summer, Rosemary got the yen to be busy and started buying and renting properties in Cape May. For a while, she had a retail store on the corner of Ocean and Hughes streets selling, sportswear of course. In the early 70s, she encouraged her brother X, short for Francis Xavier, who ran a pizza place in Philadelphia, to retire and come down to Cape May and open a pizza place here (the Stumpo version of “retiring”) and that’s how Stumpo’s Pizza became a Cape May fixture.

But that’s a story to be told later; let’s get back to the Delsea. 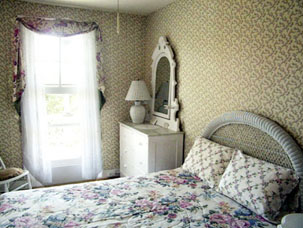 At the end of her first season, Rosemary decided to make a few improvements on the property and encouraged her friend Suzanne Littell to leave her job as a buyer for, at various times, B. Altman, Joseph Horne, and John Wanamaker department stores and come to Cape May as Rosemary’s partner and decorator.

The goal of that first re-do was simple – “to make people feel comfortable.” Together they removed the old  wallpaper and applied new. The floors were covered in an old-style linoleum so they carpeted the house to give it a cozier feel. Then they started on their second goal – to make themselves feel comfortable. They added a room on to the back of the private quarters that included a full dining room, bathroom and kitchen. 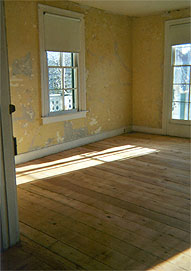 But the two were tired of painting and repainting the asbestos siding on the house. They began tearing it away from the front of the house and discovered, beneath the asbestos, perfectly preserved clapboard siding. Four days later, the job was done and yes, they did it all themselves.

There was no Historic Preservation Commission in those days, but Suzanne had a good eye and a genuine desire to bring the house back to its original state, which included restoring the Delsea to its original colors – silver gray with dark brown shutters – as well as replacing and repairing the gingerbread. 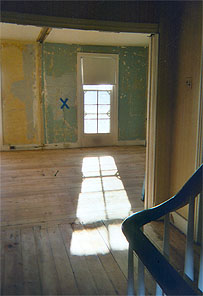 Suzanne bought a jigsaw and cut the replacement pieces herself and with Rosemary’s help reattached them to the facade.

With the Delsea’s third make-over, Rosemary is bringing the stately house into the 21st century and turning the reins over to a new generation. Rosemary’s niece Marybeth Tyron has joined the partnership and will gradually take over running The Delsea as well as the Stumpo restaurants.

Rosemary opened two more restaurants in 2004 – one in Margate and another in Somers Point. Whew! That’s a lot of work for a woman who’s planning to retire – but lest we sound repetitive – that’s the Stumpo idea of “retirement.” Marybeth, for example stepped down from her job as an insurance executive in Philadelphia to join the Stumpo team. She brought her co-worker Marilyn Jean Lee along with her. 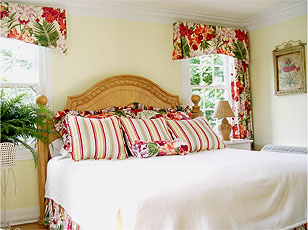 The Delsea bedrooms after renovations

Marilyn is the Chief Operating Officer at the Delsea and helped with the latest renovations which included taking the eaves off the side of the house and repainting the exterior with some spiffy Victorian colors. Baseboard heating has been provided in certain rooms in the house, including the kitchen and the new game room. The installation of air conditioners in the rooms has been a HUGE concession on Rosemary’s part. “This house is always cool – I don’t see the need for air conditioners but we’ve got them.” So, Rosemary insisted that the screens in all the windows be replaced so that guests can still feel free to “open the windows.” “That’s what people come down here for – the cool fresh, ocean air.”

New window screens, heat, air conditioners, new paint, upgrading of all the bedding – a little of the old, mixed in with a little of the new. The changes have given the Delsea a fresh, up to date look but not diminished the informality and old fashioned feel that has been the signature quality of the Columbia Avenue house.

What started out as two rooms on the second floor, is now one large room with access to the verandah. 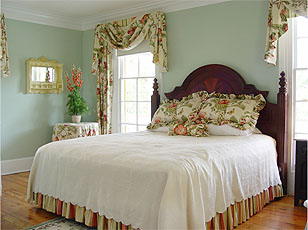 Structurally, crown moldings have been added to the rooms and two feet of living space in the downstairs bedrooms was eliminated to widen the hallways. Just like the clapboard outside, the wide wooden planks of the newly polished floors are a distinguishing mark confirming the age of the house which was designed by the architect Stephen D. Button for the Morris family. Construction materials are often the only true source architectural historians have of confirming the age of a house so preserving the integrity of the original work is important and something Rosemary and Suzanne have kept a keen eye on.

Providing a comfortable place to stay has always been a key priority at the Delsea and to that end guests can enjoy a private garden created just for them at the back of the house along with a new outdoor shower. A second garden for the private quarters was built on the opposite side of the house. Sitting in the game room, Rosemary said “It was time for a change,” and she didn’t just mean in the décor. She still wants to be very much hands on in the businesses but  also ready to scale back a bit. “Marybeth and I have been close for years but she has a daughter and son (ages 13 and 15) and was tired of the corporate life. So I said let’s do something about it. 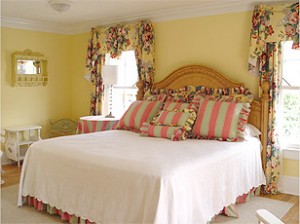 Regarding her partner Suzanne, who has already scaled back her own activities, Rosemary referred to a column written two years ago in the Cape May Star and Wave by nonagenarian Ellen Taussig: “Looking back over the years, Rosemary says of Suzanne, ‘She has been the quiet driving force in my success here.’ “
“Suzanne,” says Rosemary today, “was instrumental in bringing the Delsea House to what it is and we look forward to grandkids coming back here each year” as their parents and grandparents did. “The Delsea is still light, bright, and airy and is the best location in Cape May.”

And if you don’t believe her, come on down, check in, and wile the afternoon away rocking on the front porch.