September first is here and brings the unofficial end to the summer season.

In three days the next big season starts, Football. Football seasons’ first weeks bring hope that this is finally your team’s year to win it all. This enthusiasm is manifested in many ways from wearing your team’s colors, face painting, bad bets, and most important Tailgating.

Jets Fans you may have Brett Favre, but you’re still the Jets and the only way you’re going to the Super Bowl is if you buy tickets. So don’t bet the house on it. Now, where was I? 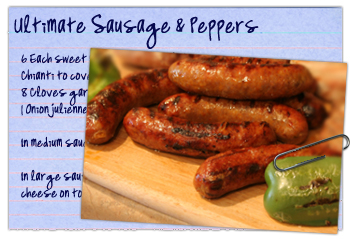 Proper tailgating has been elevated to an art form by some fans. The preparation for the pre-game festivities lasts longer than the game itself. Gone are the days where you can get away with putting out a six-foot sub and a case of beer. I have been to tailgates with more elaborate food than some weddings. Only fair, since the festivities last longer than a Pamela Anderson marriage.

When planning a tailgate try and do your preparation at home and just reheat or finish foods on site. While some diehards tow smokers and grills the size of a 747 to the stadium, most people have more modest equipment to use. Although I am usually a strong advocate of charcoal or wood fired grills for cooking, since they produce better flavor. For tailgating, ease of use and cleanup, a small portable propane grill works well. There are many quality models available in the $50-$75 range. Look for one that is easy to setup and has sufficient BTUs to cook at high enough heat.

After selecting the equipment, it is time to select the beverage for early season games. Cold beer is necessary in December and January. Fortified coffees or adult hot chocolate can ease the pain especially if your team is out of the playoff picture and you are still at the game. Beer choices vary from region to region. Iron City is okay at a Steelers game, but may mark you as an outsider at an Eagles game. Word to the wise; don’t be marked as an outsider in Philly. This is, after all, the place where they threw snowballs at Santa. Just because they make light beer – even microbrew meist
er Sam Adams makes one (I think it’s called Samantha Adams. Perfect for lightweight Patriot fans) – doesn’t mean you should drink it. Choose a manly beer with flavor. Remember the ABCs, Anything But Coors. The Rocky Mountains may be refreshing, but Coors packs as much punch a John Denver Album.

The food should be hearty but can be fancy and cutting edge. For a twist, simmer your sausage in Chianti before throwing on the grill this allows you to pre-cook the sausages at home and be reheated at the game. Another favorite tailgate food is figs (Dried figs can be soaked in port wine to reconstitute if fresh figs aren’t available.) stuffed with Gorgonzola cheese and wrapped in prosciutto. This recipe can be found in the fall issue of Cape May Magazine. Crab and Artichoke dip with baguettes or pita bread scores well with the hometown crowd. As does a twist on classic gyros, grilled lamb top round sandwiches with smoked paprika taziki sauce. No matter you root for, cheering on a full stomach makes the game more enjoyable. Good tailgate food easily beats lukewarm $7 stadium hot dogs. As you pack up the SUV and head for your favorite stadium, take along these foods as well as your traditional favorites. Until next month, Bon Appétit.

Combine all ingredients in top part of double boiler over medium heat. Cook until bubbling hot stirring occasionally to ensure even melting of products.