Food and holidays often become intertwined with the original connection lost through time. It is doubtful that the Pilgrims and Native Americans dined on turkey at the first Thanksgiving, but I challenge you to serve something else on the fourth Thursday in November. It is also doubtful that any of the three St. Valentines that inspired the modern winter romantic holiday had even heard, let alone tasted, chocolate. A man that does not buy chocolate for his significant other on February 14th is either foolish or has a girlfriend with a chocolate allergy. The other 51 weeks in the year women buy 75 percent of all chocolate, but in the days leading up to Valentine’s Day men make 75 percent of all chocolate purchases.

How did a holiday, around since the earliest days of the first millennium, get mixed with a substance not known outside Aztec culture until the 16th century?

In Aztec culture chocolate was prized for its libido enhancing properties and was only consumed by royalty. Montezuma drank over fifty cups a day. Modern science has shown that there may be some truth to the belief of chocolate as a drug. Chocolate has been linked to stimulating neurotransmitters, most notably serotonin, which can stimulate euphoria and sexuality. It acts as an antidepressant. Chocolate contains other chemicals that have an opiate-like effect on the brain without the addictive properties.

Bottom line, chocolate tastes good and makes us feel good. The first Valentine heart-shaped box of chocolates is traced to the Cadbury Company in England in the 1860s. Since then the connection between Valentine’s Day and chocolate has become inseparable.

Chocolate’s feel-good effects have made the chef’s life easier. Adding chocolate to any dessert makes it an instant crowd pleaser.

In recent years chefs have introduced chocolate in unsweetened forms into savory dishes as well. Good quality, unsweetened chocolate pairs well with the earthy flavors of game such as elk, venison and even game birds like quail and squab. It also works well in barbecue sauces and classic Mexican moles. Chile peppers and chocolate flavors work very well together.

This year, Valentine’s Day falls on a Saturday. This gives you a perfect opportunity to have a chocolate-filled culinary weekend. Start the morning off with Chocolate Pancakes with Raspberries. Enjoy an afternoon sipping Decadent Hot Chocolate and Kahlúa®.

In the evening savor a Grilled Pork Tenderloin with Chocolate Barbecue sauce. Watch movies such as Chocolat and Like Water for Chocolate to experience chocolate’s sensual side in film.

Chocolate is a food with a sensual history and a reputation. Maybe that is the real reason why it has become so entwined with a holiday set aside to celebrate romance. Until next month, Bon Appétit. 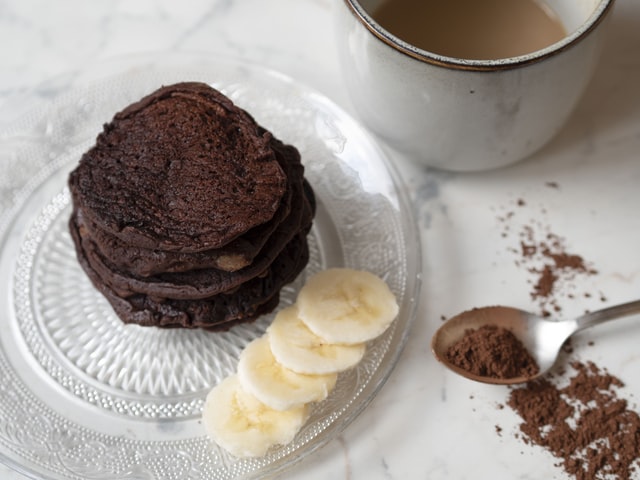