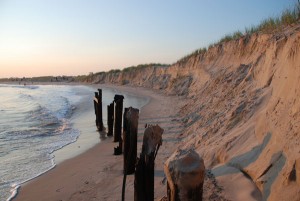 “Blame it on Mother Nature.”

According to City Manager Bruce MacLeod the sudden disappearance of the Cove beach is the direct result of “astronomical [literally] extreme high tides” over the last month and particularly during the full moon July 7. MacLeod said the Cove was never part of the state and federal Beach Replenishment program which has been pumping sand back into the beaches of Cape May since 1991. He said the sand was only pumped up to the jetty at what is commonly referred to as Third Avenue. The Cove is considered part of Cape Meadows. The fact that the Cove beach expanded to the point where city officials in 1995 felt compelled to put a lifeguard stand in has all been part of a natural evolution. And, it seems, what Mother Nature giveth, she has decided to take back. City officials are also worried about a mass of salt water that invaded the Mt. Vernon section of the beach and headed into the South Meadows. MacLeod said a swab of salt water some “30 to 40 feet wide” found its way into the Meadows last Thursday. MacLeod said representatives from the Army Corp of Engineers and the Bureau of Coastal Management are coming to Cape May in the next few days to inspect that site. 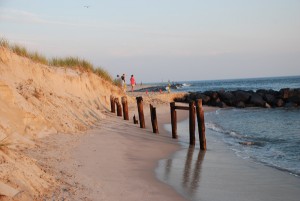 Locals say the Cove is just going back to the way it was 20 or 30 years ago. In fact, MacLeod said longtime Cape May Beach Patrol lifeguard Lt. Harry Back predicted city officials would start seeing another jetty by the Mt. Vernon beach entrance reappear. “Sure enough, after the weekend, we spotted it,” said MacLeod.

According to MacLeod, Cove beachgoers will have to check the tide charts and make sure their bathing is at low tide until Mother Nature again decides to shine down on the little strip of beach at the end of Cape May. Don’t forget, at one time that area was the site of another borough, known as South Cape May. There’s a reason why it isn’t there anymore – Mother Nature. 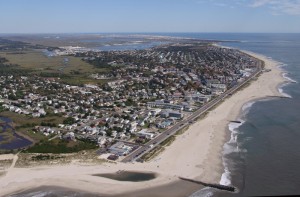 Aerial view of the Cove beach in 2006

Learn more about beach replenishment and erosion in Cape May

Rebuilding a Beach
Nature Meets Nurture at Saint Mary by the Sea
Cape May Beach Replenishment Project
What happened to South Cape May?