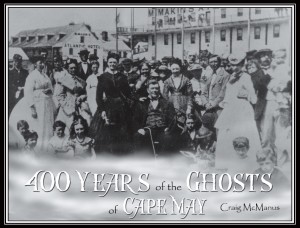 Ghost hunter and psychic Craig McManus has been panning for ghosts in Cape May for years now and has struck “pay dirt” resulting in four books, The Ghosts of Cape May Book 1, 2 and 3, and his most recent effort, 400 Years of the Ghosts of Cape May, which was released this summer and pays homage to Cape May’s year-long celebration of the “discovery” of Cape Island 400 years ago when the Dutch sail boat the Half Moon, captained by Henry Hudson, struck a sand barge and got stuck here one night – August 29, 1609 to be exact. McManus also tips his hat to the splendid photography which has chronicled Craig’s hauntings with his camera from the onset.

CapeMay.com and Kaleidoscope (a boutique located at 506 Washington Street Mall) are hosting a book signing Saturday, October 10, 2009 at Kaleidoscope from 7-9 p.m. Following the book signing, Craig will be talking about some of the hauntings on the Mall. According to Craig, Cape May’s Washington Street Mall actually has one of the largest concentrations of ghosts in town…it gives ‘Shop until you drop’ a whole new meaning.”

Below is an excerpt from 400 Years of the Ghosts of Cape May. 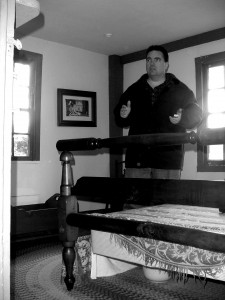 As the sea continued to swallow up the high bluff and low beaches on the bayside of Cape May, including the small Town Bank settlement, the early pioneers, at least the ones who were not buried there, began to move inland.

By the early 1700s, all that was left of the old whaling colony was a collection of farms dotted with ruins of the original settlers’ homes. A few of the tombstones from the early graveyard were moved to Cold Spring. The rest, along with the bodies beneath them, slowly washed into the bay and are now, along with that early settlement, deep beneath the surf. You’ve heard the old expression, “Someone’s walking over your grave?” In Cape May we say, “Someone’s swimming over your grave.” 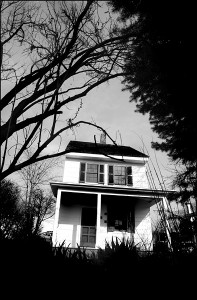 The Memucan Hughes House, aka The Colonial House

Most of the Cape May peninsula and a large portion of southern New Jersey originally belonged, in the late 1600s, to Dr. Daniel Coxe, an esteemed English physician whose patients included Charles II and Queen Anne. Coxe held the title to many pieces of land including a huge tract in Cape May.

While he never actually came to America, Coxe did keep a large plantation on the bay side above Town Bank where he erected Coxe Hall, a meeting place for all of the residents of the settlement. After Coxe began to liquidate his American holdings in the 1690s, land titles began to pass to the first settlers. This is really where the true early history, and hauntings of Cape May begin. The people had arrived, their ghosts would soon follow.

Cape May County is rich in early history and (luckily for me) rich in early ghosts. While some ghosts seem to remain in their dwellings for centuries, most eventually do cross over. We are creatures of habit and we habitually get bored with things. Ghosts, human souls without the body, also get bored doing the same thing year after year. After a few centuries those souls probably make the leap to the Other Side out of shear boredom. How long could you stay in your room?

One of the highlights of ghost hunting is all the great living people that one comes to know. While writing this book, I had the pleasure of (finally) meeting historian and writer Joan Berkey. Joan’s book, Early Architecture of Cape May County, is packed with historical facts and pictures of Cape May’s earliest houses and settlements, some of them places that I have written about in my books. If you love early history and are a Cape May fan, this book is a must read. 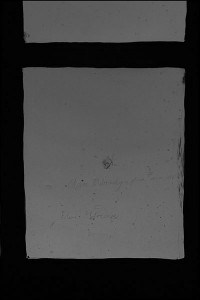 Writing on the window at the Colonial House

Probably the first really old house that caught my psychic attention in Cape May was the Memucan Hughes or “Colonial House” set back behind Alexander’s Restaurant and next to the Police Department on Washington Street. The exact age of this old dwelling/tavern was a matter of debate for many years. First it was thought to be 1760s, the most recent thinking as it was built around 1800, making the house not Colonial at all.

Historian Joan Berkey very recently found evidence to the contrary, however, that the structure may date back to 1730, making this house one of the oldest standing structures in Cape May City. The older the structure, the more chance of it being haunted. Layers of history converging on one spot have a way of bringing out the best in ghosts and the best ghosts.

The Colonial House is now a museum run by the Greater Cape May Historical Society. If you want to visit a real haunted house, but do not want to spent the night, this is the place to go. While the downstairs museum area is somewhat active, the real hot spot is the third floor attic area. Once you get past the old timber door with its many locks and ascend the winding stair case, you will find the paranormal heart of the Memucan Hughes House. Beyond that old door the undead linger. 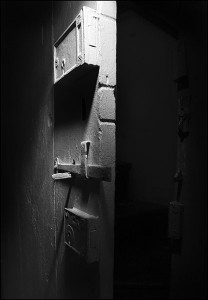 Locks on the attic door.

Who exactly is haunting here is a matter of question. Many tour-goers report seeing a figure in the third floor window, but cannot tell if it is a man or a woman. This house has also yielded a bounty of EVPs (Electronic Voice Phenomena) for myself and other investigators. Both male and female voices have been captured on tape.

One of the ghosts I sensed in the house gave me the name “Sarah.” As far as I have been able to check, there has not been a Sarah associated with the house. However, ghosts are transient and, as this building was one of Cape May’s first taverns, there may have been a “Sarah” who worked there.

This house is thought to have originally been built by the Eldredge family of West Cape May, and was most likely moved here from a spot on Jackson Street where Cape Savings stands today. Since the hose has had so many owners and is one of the last remaining early period houses in town, it is quite possible that the ghosts are early as well. Whatever is lurking in the Colonial House is locked behind that old attic door. Someone at one point in history put multiple locks on that old door and I would suggest keeping those locks in good working order! You can read the entire story in The Ghosts of Cape May Book 2. [published in 2006]

Read more about Craig McManus’ investigations in 400 Years of the Ghosts of Cape May.

Tags: paranormal, This is Cape May