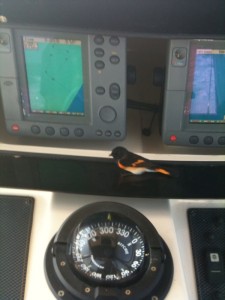 My husband was fishing about 12 miles out when this American Redstart alighted on his shoulder. After hopping on his head for a spell, it then proceeded to walk down his arm and settle on his shoulder. He stayed with my husband for about 30 minutes for his ride back to shore, finally resting on the instrument panel to stay out of the wind. With 2 miles left to go, his little friend decided it was time to go and did just that.

I wanted more information about this little bird than what was contained in my abbreviated bird book, so I contacted a friend who sent me this information:

Wow, what a cool experience! This bird is a male American Redstart–which is a warbler. It was probably a bird that bred further north in the US this summer, and has left the breeding grounds. It’s very likely that this bird was undergoing a long distance migration to Central or South America (where it will spend the winter), and got fatigued and looked for a place to rest. Out at sea, there aren’t many options! Typically, small birds like this will migrate at night, and then put down in the morning sometime to rest and refuel before nightfall. Most songbirds like warblers tend to migrate over landforms, though, sometimes get blown out to sea and get off course. Most likely, the ride your friend gave this Redstart may have saved his life by giving him a break and safe place to rest for a bit. I don’t think I know anyone who’s had a Redstart walk on their shoulder. Warblers like this tend to spend most of their time in treetops, and are quite active and rarely come close enough for a good look.  So, your friend is lucky!

We think so too!

Susan and Steve Teitelman
Cape May