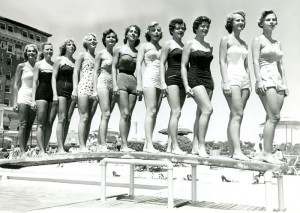 This story originally ran in the July 2008 issue of Cape May Magazine.

It is 1950, well, maybe ’51. The war is over and optimism abounds. Corsets have gone by the wayside, and designers are creating more revealing swimsuits that hide faults in a woman’s shape. They achieve this by adding stretch-tummy control panels to hold in the stomach and they use bra cups and boning to give bust support. Thus is born the strapless swimsuit.

In Cape May that summer, Sandy Deacon (Miller) was named Miss Philadelphia Beach. She did not win the coveted title of Miss Cape May Beach Patrol that year, but enjoyed the September ball at Convention Hall anyway. 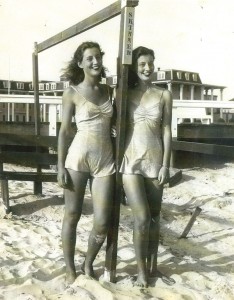 The Skinner Twins, Margaret and Barbara, on Congress Beach in the late 1930s. (Click to enlarge)

“The lifeguards picked a girl to represent their beaches,” Sandy recalled. “We would go down to the Christian Admiral Hotel and have our picture taken. The contest would end at Convention Hall shortly after Labor Day where we would parade out in our evening dresses and bathing suits. I came in third that year.”

A lot has changed in the way we dress for the beach since the ’50s, but think of how much things changed leading up to the “I like Ike” days. Cape May has from its inception been about families coming to the beach. Fortunately for Cape May Magazine those very families have kept their own chronicles of those lazy, hazy days of summer. Many of them have shared their family photos with us and we hope you enjoy them as much as we did. And a special thanks to Don Pocher for sharing his collection of turn-of-the-century postcards with us. 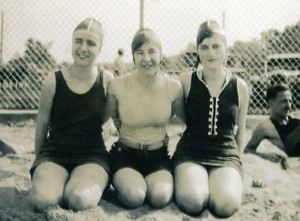 Let’s turn the clock back to the ’30s. Swimwear was getting briefer and more risqué. The backs were often scooped out so that a woman’s tan would show off at night in backless dresses. Little skirts to hide the thighs were popular. But the age of the contour suit and costumes with higher cut legs made a splash when swimming stars like Esther Williams and Dorothy Lamour hit the water with their synchronized performances.

The roaring ’20s ushered in the athletic tank suit, a popular choice for both men and women. The tank was ideal for the “androgynous athletic figure” that characterized the ’20s. The tank featured often unflattering stripes or abstract patterns. Those with less than perfect figures covered them up with wraps. New on the scene was the bathing cap. It was tailor made for bobbed hair and similar to the cloche hat of the same era. 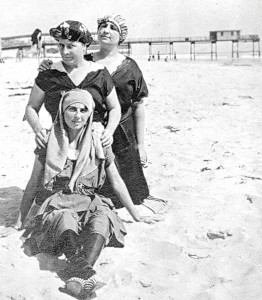 Margaret Suelke and her sisters, Mrs. Patterson and Mrs. Gimmel. 1910. (Click to enlarge)

Now let’s go back even further to the Victorian era when women were covered from head to toe. Women typically dressed in black, knee-length, puffed-sleeve wool dresses. They often had sailor collars. They were usually worn over bloomers. The later Victorian swimsuit outfit was still cumbersome, but more practical than the earlier serge or dark flannel bathing dresses. Edwardian swimsuits were very similar to Victorian styles in that they were still made of wool and included bloomers with an over-dress. The dress was now short-sleeved or sleeveless and was worn with black stockings and laced footwear.

And then there was the Great Cape May Speedo Caper of the early ’60s. According to then Mayor Frank Gauvry the rumors that an ordinance was passed banning speedos worn by men over the age of 12 from beaches simply to reduce the number of gay sunbathers was really not true. “It was the Canadians,” he maintained. “We passed the ordinance after a lot of merchants, residents and visitors complained about the Canadian men who were wearing nothing but a jock strap on the beach.

The women would take their tops off. Now the women eventually got the idea, but the men didn’t. So we had to pass an ordinance.” The speedo ban was repealed in 2005, thus proving that what goes around comes around.