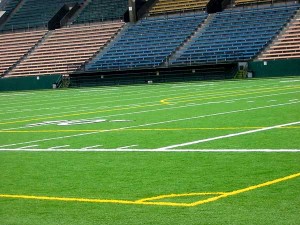 My Sundays in the fall revolve around three F’s – Football, Food and Friends. It is always the food that ties the other two together. The game can be lousy and friends will still come over if you put out a good game-time spread. In the case of Big Games, the type of food you serve can actually affect the outcome of the game. I once made chili with chickpeas and the Giants blew a 20 point lead against San Francisco in a playoff game. A turkey, red-bean chili fiasco coincided with Dan Reeves being hired as head coach. A pastrami sandwich on really good rye bread and spicy brown mustard single handedly defeated the evil Patriots in Super Bowl XLII.

Cities renowned for a variety of good food are more successful in the NFL. Pittsburgh is known for its hearty pierogis and the inimitable Primanti Brothers sandwich as well as six Lombardi trophies. New York City is known for great deli, pizza, cheesecake, great street food and a culinary melting pot along with three Super Bowl rings – four if you count the Jets. I don’t. Dallas, the harbinger of Tex-Mex food, and San Francisco, the west coast capital of gastronomy, boast five championships each. Cities with no culinary tradition like Cincinnati and Cleveland? Zero wins. Towns with only one singularly famous dish don’t fare so well either. Buffalo, whose only culinary claim lies with those namesake wings? Zero for four in the big game. Being famous for cheese steaks has gotten the Eagles two appearances in the big game, but no victories for this one-dish town. 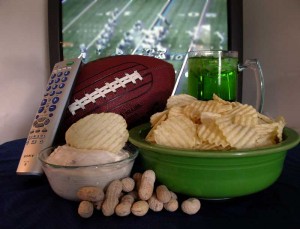 The symbiotic relationship of food and football is undeniable. Good menu planning is critical. I prefer to go with dishes representative of the teams involved. Looking at the NFL’s opening week schedule, the culinary competition is fierce. Opening night should be an easy win for the defending champs – the New Orleans Saints – over the Minnesota Vikings. Gumbo and po’boys tackle pickled herring any day. That Sunday gridiron gourmets can choose from a cheesy contest between the Green Bay Packers and that team from Philadelphia or a Deli-ightful contest will have the New York Football Giants barbecuing those Panthers from Carolina. All mouth-watering match-ups.

Picking the right food for the game, means serving food that can be made ahead or that involves little last minute preparation. Being in the kitchen, flambéing while listening to your buddies scream as your team gets toasted, when the opening kick-off ends up being run back for a touchdown, makes for a long afternoon. Hot and spicy queso dips taste good and go well with cold beer. Buffalo wings or any of the hundreds of variations are also good game grub. Make real ones. Don’t buy the pre-cooked frozen varietals. They are expensive and not as flavorful as homemade. 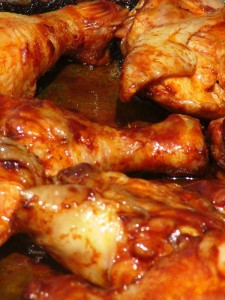 Serve Red Curry Chicken Wings as part of your next all-star lineup.

Here is my all-star lineup of football food favorites. Starting with dips – first team is Spicy Green Chili Queso with tortilla chips. Second string is Crab and Artichoke Dip with pita bread. Hearty soups and stews are led by Raging Red Beef Chili with Beans with honorable mention to Chicken and Sausage Gumbo. Sandwiches are flanked by Sausage and Peppers and the Ultimate Patty-Melt. At the wingback position, we have Fiery Red Curry and the mild, but fan-favorite – Honey Barbeque. Special teams are led by New Castle Brown Ale and local favorite, Yuengling. For defense? Tums and Prevacid with Advil, if the home team loses in overtime.

As you get ready to kick-off your football season, try the recipes for Raging Red Beef Chili, Red Curry Chicken Wings and the Ultimate Patty-Melt. Until next month, Bon Appétit.

Note: Real sports fans never change teams. I was born a Giants fan and remain so, even though I live in enemy territory. Go Big Blue.

Cook burgers on grill until desired doneness. Heat griddle to medium. Brush bread with margarine. On top side, slather mayo mixture, then 2 slices cheese on each slice. Top with onions on one half of the sandwich and bacon and pickles on other half. Cook until cheese melts and bread is golden and crispy. Put burger on onion half. Top with bacon. Cut in half.