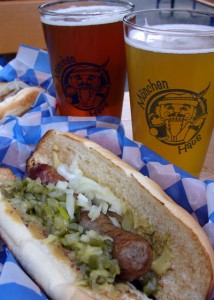 In the world of food and beverage, there are no two countries closer geographically, that are more diametrically opposed in how their cuisines are viewed, than France and Germany. Mention French cuisine and visions of haute cuisine abound. Crusty baguettes accompanied by wheels of ripe artisan cheeses. The names Careme, Escoffier and Bocuse are revered by culinarians around the globe. Paté de Foie Gras, Salad Nicoise, Coq au Vin and Sole Meuniere are the dishes future chefs practice to hone their craft. Speak of German cuisine, and most people picture lederhosen-laden house fraus carrying platters loaded with sausages and bread dumplings plump as themselves. Schnitzel, spaetzle and strudel don’t carry the same culinary caché as anything French does to food lovers. France has ancient vineyards producing vintage wines with enticing bouquets. Germany has beer. There was a time in America when German restaurants dotted the landscape and Sauerbraten and red cabbage were beloved. German cuisine has become an anachronism in the age of global cuisines and it is a shame.

Germany’s meat and potato-laden fare is more akin to the American diet than most other cuisines. German food is often highlighted by a penchant for sweet and sour flavor combinations that ignite the taste buds. German bread traditions are also very interesting. Most breads use a sourdough starter base. German pumpernickel, rye and potato breads are well known, but only skim the surface of the over 600 varieties of breads. Whole grains are preferred. Grain blends are common such as roggenmischbrot, rye-wheat, and kurbiskernbrot, pumpkin seed and dark rye. The breads often accompany smoked trout or the ubiquitous sausage. Germany is hog heaven with over 1,500 types of sausage. Bratwurst and leberwurst (liverwurst) are well known in this country. Knackwurst, landjaegerwurst, blutwurst andweisswurst are the best of the wurst that Germany offers. German mustard accompanies the sausage and the bread and has its own unique characteristics. While German cuisine is not renowned for spiciness, German mustard can clear the sinuses. German mustards come in a wide range of flavors from the brown sugar-enhanced sweet types of Bavaria to the horseradish-grained fiery blends of the north. Several types of mustard are found in each region. Most are coarsely ground and contain a blended combination of yellow, white, brown or black mustard seed depending on the flavor profile desired. Specific mustards accompany specific sausage. In Germany, even condiment usage is rigidly organized.

Even more regimented than mustard is the German attitude towards beer. The Reinheitsgebot or German Beer Purity Law of 1516 decreed only three ingredients could go in beer – water, barley and hops. The law was not just about beer. One of the prime reasons for the law was to prevent wheat and rye being used to eliminate price competition between brewers and bakers. German love for beer, bread and sausage is historic. Hops were first used in beer not for flavor, but as a preservative. The role of yeast in beer-making wasn’t discovered until the late 19th century, hence it was not mentioned in the Reinheitsgebot. Although the law is no longer on the books, if it was we could not enjoy heiffeweissen the excellent German wheat beer, many brewers still cite it on their labels to reflect the pride and tradition German’s have for their brewing heritage.

The love for Beer and Bratwurst immigrated to America with German immigrants and has become part of the national fabric. American cuisine owes a debt to Germany for introducing hot dogs, hamburgers and beer to us. We may have been a British colony, but football Sundays with fish and chips and blood pudding doesn’t seem as enticing.

This October as cool air makes it safe to reenter the kitchen, make time to discover the German influence on the world of food. Re-visit traditional favorites like Jaeger Schnitzel with braised green cabbage and spaetzle, and a Persnickety tribute to the marriage of food and beer – Cheese Soup. Until next month Guten Appetit. 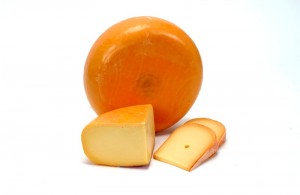 IN THE SAME PAN AS YOU COOKED THE PORK, add bacon and brown. Then add onions. Cook until browned. Add mushrooms. Lightly dust with flour. Deglaze with wine. Reduce by half. Add stock. Reduce until sauce coats back of spoon. Serve over pork schnitzel. 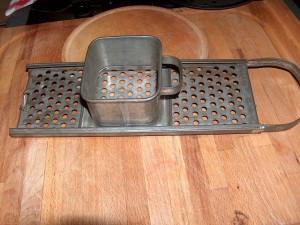 A spaetzle maker like the one above makes it easy to create spaetzle noodles. You can use a colander or the non-sharp side of a cheese grater plus a spatula as a substitute.