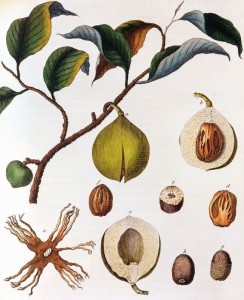 The Victorians loved legend and lore of times gone by. In autumn, they used many herbs and spices that were associated with fall holidays. The Victorians were awed by the exotic. Apples and pumpkins played an important part in the fall celebration of foods and decorations. With these came spices, and even though many grow in tropical places, we still eat gingersnaps and our pies are flavored with cinnamon, nutmeg, cloves and allspice. Hot cider is fragrant with these same spices. Little corn dollies have long been made this time of the year to hang in homes to ward off evil and to add herbal scents to a room. Spices are usually the root, the bark or the seeds of a plant that usually grows in a tropical climate, while herbs can be grown in the garden.

Nutmeg (Myristica fragrans) is from the nutmeg tree, a large evergreen native to the Spice Islands, but is now cultivated in the West Indies. It produces two spices, mace and nutmeg. Nutmeg is the seed kernel inside the fruit and mace is the lacy covering on the kernel.

The Arabs were the exclusive importers of the spice to Europe up until 1512, when Vasco de Gama reached the Moloccas and claimed the Spice Islands for Portugal. The British spread the cultivation to other East Indian islands and then to the Caribbean. Nutmeg was so successful in Grenada it now calls itself the Nutmeg Island.

Nutmegs have long been lauded as having magical powers and were used as amulets to protect against evil. In the middle Ages, folks wore little graters made of silver, ivory or wood with a compartment for the nuts. It tastes nutty, warm and slightly sweet and is often used on fall pies and custard dishes, as well as soups. 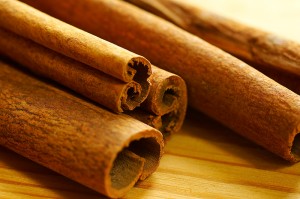 Cinnamon is the inner bark of a tropical evergreen tree. Cinnamomum cassium or zeylanicum, as the tree is called, is a native of Sri Lanka (formerly Ceylon. In the Middle Ages people often combined meat and fruit in a simple casserole type dish. Spices were used in them. Mince pie is an example.

Since ancient times, many of these spices were used to honor or preserve the dead. The ancients honored their dead in autumn so this custom continued with the early Christian people of the Middle Ages. Sometimes the very old customs were combined with those of the early church to celebrate All Souls’ Day. In the 1500s, in old England, an ancient chant was sung by young people who went around the village on the eve of All Souls’ Day trading prayers for the dead for a Shropshire Soul cake. These sweet bread buns were spicy and flavored with many spices as well as with saffron, the pollen of the fall blooming crocus. Part of this custom remains when kids go out for sweets, but they no longer sing or remember the dead.

Fall crocus are bulbs that can be planted now and will bloom within a few weeks of planting. Every herb garden should have some saffron crocus!

Other plants associated with this season include Rue, a hardy perennial and ‘bitter herb’ of the Bible that was hung in doors and windows this dark time of the year so that no evil spirit would dare to enter the house. Medieval priests would dip the rue in Holy water and shake it to anoint people or bless houses. The Victorians also made little bouquets of rue tied with glittery ribbons and hang in the door way. 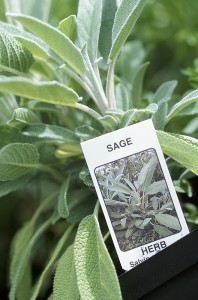 Sage or Salvia is a symbol of domestic virtue and immortality. It was often planted on graves in days of old as it was said to live forever, often thriving on neglect.

We think of milkweed as a plant for Monarch butterflies, but legend tells us that it is magical and attracts flower fairies. The silky tassels of milkweed pods were often added to pillows to create pleasant dreams during this scary, dark season. Hop blossoms can also be added for good sleep and pleasant dreams.

Rosemary, the loveliest of herbs, was brought to England in the 14th century. It was used for thousands of years in the Mediterranean countries where it was hung over the cradle of infants to protect them from the evil eye. Brides often carried rosemary to ward off evil. Sometimes it was burned with thyme and juniper near to Halloween because the smoke was said to get rid of witches and evil spirits. Victorians often put it in their bouquets to send a message and used it between Halloween and Christmas because of its wintry fragrance. 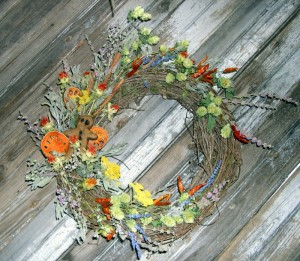 Thyme is another magic herb because many wore it as a protection from evil and sprinkled it near doors and windows to keep away evil spirits.

The legends are countless and fun to read on an autumn night. All of the late Adelma Simmon’s books have the spice and herb legends, as well as recipes, ideas for holiday trims, gardening information and herbal uses. I have enjoyed them for years and have most in my herbal library.

In Autumn I often make pumpkin soup and sometimes use the Simmons Capriland recipe [see November 2008 issue of CapeMay.com, Thanksgiving’s Centerpiece] and serve it in a hollowed out pumpkin. I love to place it on a tray with herbs, leave and berries as well as mums, marigolds and Calendula blooms making a ring of golds orange and reds for a festive centerpiece or fresh and dried herbs for fragrant arrangements.