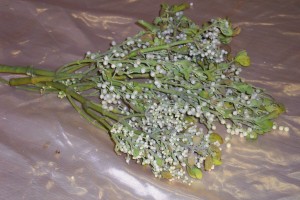 Can you find some mistletoe growing in a tree? It is in Cape May County and all over.

Mistletoe memories for me go back to when a pile of fresh, crisp green mistletoe was heaped in a basket at the vegetable market on the corner of Landis Avenue. It was locally grown, of course. Now, if you try to find mistletoe, it is often in a box and kind of shriveled. Sometimes it is dark green because it has been treated. Most recently, it has no berries because of the liability. I doubt if anyone was ever poisoned accidentally from a mistletoe berry or any other Christmas plant.

When our sons were in high school, a few of their hunter friends use to ‘shoot’ mistletoe down from a treetop and I would sell it for them at the nursery. I had heard recently that there was no more mistletoe in the local woods. I found out otherwise! A little browsing on the internet and I found a real expert on mistletoe here in Franklin Township. Local field botanist Joe Arsenault is the chairperson of the talented group of researchers and environmentalist who prepare a native plant website, which is, hosted by Rutgers. A really good website, flora of New Jersey, has a nice page on mistletoe. 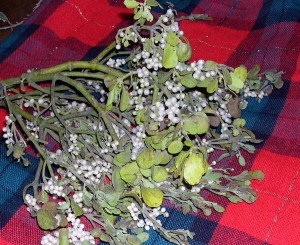 Joe told me that he has a list of about 50 plus sites in southern New Jersey, with many of them being right here where I live in Franklin Township. It actually grows all over with many stands also in Cape May County. Joe, who is a private native plant consultant, lives in Franklinville and considers himself a botanist /plant ecologist. He said seeking mistletoe is a great “sport” for this time of the year when there are no leaves on the trees and you can see it growing in the treetops.

When I asked him how he finds mistletoe, he told me that the local stuff grows exclusively in black gum, Nyssa sylvatica. He added, “Go across the bridge to Delaware, and you will find it in red swamp maples and sweet gum.”

The last few days I have been looking skyward when near any wooded areas and lo and behold I saw a ball of mistletoe less than a mile from the big Wal-Mart / Staples complex in Washington Township. I am sure that there is some mistletoe somewhere near where you live, let me know if you find any.

Recent searches for the plant by Arsenault have found colonies in Atlantic, Burlington, Camden, Cape May, Cumberland, and Salem counties. Most populations are within the Maurice River, Mullica, and Great Egg Harbor watersheds. He says, “My surveys found the plant exclusively on branches and trunks of black gum (Nyssa sylvatica). Reputable observers have provided oral records of the occasional mistletoe occurrence on red maple (Acer rubrum var. trilobum) as well. A single unsubstantiated record exists for Camden County on a white oak (Quercus alba). No recent records exist for any additional host trees in New Jersey.” 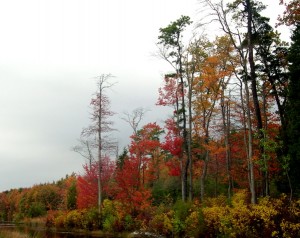 Mistletoe is a semi-parasitic plant with little leathery leaves and small, white berries. Few people see it because it grows in treetops. Mistletoe plants manufacture their own food, but must obtain water and minerals from the tree in which they live. Birds eat the berries, digest them and then spread the seed.

American mistletoe (Phoradendron serotinum) can be found growing in deciduous trees from New Jersey southward to Florida and Texas.

Traditions come from legends about mistletoe and date back to ancient times. Druids believed that mistletoe would bring good health and happiness. Welsh farmers associated mistletoe with fertility. A good mistletoe crop foretold a good crop the following season. Mistletoe was also thought to increase human fertility and has long been used in folk medicine. It has been used as treatment for pleurisy, gout, epilepsy, rabies, and poisoning. No one should try this because the berries are poisonous!
It was thought that kissing under the mistletoe increased the possibility of marriage in the upcoming year.
In poetry and literature, it has been called the golden bough. It was considered sacred by both the Celtic Druids and the Norseman. The Druid priests would cut mistletoe from a holy oak tree with a golden sickle. The branches had to be caught before they touched the ground. The priest then divided the branches into many sprigs and distributed them to the people, who hung them over doorways as protection against thunder, lightning and other evils. English folklore, giving magical powers to this plant, blossomed over the centuries. It is also the plant of peace in Scandinavian folklore.
Although many sources say that kissing under the mistletoe is a purely English custom, there’s another, more charming explanation for its origin that extends back into Norse mythology. This legend is often found in or on the boxes of mistletoe: 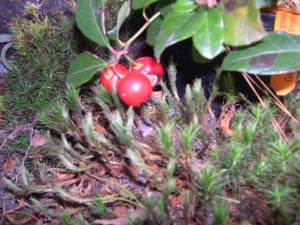 The Norse god Balder was the best loved of all the gods. His mother was Frigga, goddess of love and beauty. She loved her son so much that she wanted to make sure no harm would come to him. So she went through the world, securing promises from everything that sprang from the four elements – fire, water, air, and earth – that they would not harm her beloved Balder.

Then Loki, a sly, evil spirit, found a loophole. The loophole was mistletoe. He made an arrow from its wood. To make the prank even nastier, he took the arrow to Hoder, Balder’s brother, who was blind. Guiding Holder’s hand, Loki directed the arrow at Balder’s heart, shooting him dead.

Frigga’s tears became the mistletoe’s white berries. In the version of the story with a happy ending, Balder is restored to life, and Frigga is so grateful that she reverses the reputation of the offending plant – making it a symbol of love and promising to bestow a kiss upon anyone who passes under it.

Somehow this tradition became connected with our holiday Christmas. The English did bring it to this country where they readily found mistletoe growing. Today some people still hang mistletoe in doorways where guests arriving to the home will be kissed. Others make a kissing ball of boxwood and supplementary greens and hang mistletoe from the bottom adorned with red ribbons. This decoration might have originated in Williamsburg in this country. The balls can be made by putting wet oasis in a wire or mesh cage and then sticking the greens in it. It can be watered often to keep the green fresh, but it will last best if hung outdoors.

So look up when passing a swampy area where black gum grows. That ball in the treetops might be mistletoe. If it is mistletoe you will have good luck or at least that is what the legend says. Take a mistletoe walk soon!