A few years back I became serious about growing the native plant Lindera benzoin for wildlife. Although it was a plant that I would only get a request for from time to time in our nursery, all that I read about the plant fascinated me. The plant was not one I knew and I did not remember it growing locally, but my son reminded me it grew in his woods in Greenwich Cumberland County.  Our other son said he saw it in Fairmount Park Philadelphia while biking along the Wissihickon River. The customers who asked for the plant were usually our native plant folks who were interested in birds or butterflies. Finding the plant in the trade was rather difficult here in southern N. J. as there were not a lot of sources at that time to find cuttings or stock plants. Now it is a lot easier to locate it. Some of the local wholesalers are seeing the interest in this really easy-to-grow, valuable native. I am excited about it and carry many plants now. It is the main host plant for the Spicebush butterfly and the awesome promethea moth. 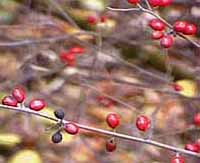 There are many references made to the historic culinary and medicinal uses of Lindera benzoin. One of the most common uses was to make a medicinal tea. Legends tell us that both the native people and our own armies used leaves as a substitute for tea during both the Revolutionary and Civil wars. The fruit has been used as a substitute for allspice since American spicebush’s bark, fruit and leaves are all aromatic. The essential oil of the plant has been used for fragrances and perfumes. Colonial people also used the berries, dried and powdered, at the time of the American Revolution as a substitute for allspice, and the dried spicebush bark in place of cinnamon. Twigs were often steeped in boiling water to make a tonic to reduce fever, relieve colds and destroy intestinal parasites. Both the native people and the colonials used Lindera benzoin as a warming herb to improve circulation. There are countless lists of uses by the native people for this plant, but the one that struck my fancy said that the Cherokee people used this plant to flavor opossum or ground hog !

Wildlife also needs this plant. Since I love butterflies and birds, I decided to plant two along the fence on the outside of my garden fence.  Both plants thrived in the sunny well-drained area that got watered whenever we watered the garden. These plants bloom early in the spring, just as the red maples in the swamp finish. Many other plants are bare when these begin so they are one of the first nectar sources for pollinators. Most people are not aware of this important value of this plant to pollinators. According to William Cullina in his Native Trees, Shrubs and Vines book from the New England Wild Flower Society, Lindera blooms the same time as the skunk cabbage, Symplocarpus foetidus, and marsh marigold, Caltha palustris.

When my plants grew taller than me I noticed many spice bush butterflies hovering near them throughout the summer. Soon they laid eggs and the larvae ate and then rolled up in a leaf to make a cocoon. This was very good and made me glad that the plants grew along my garden. 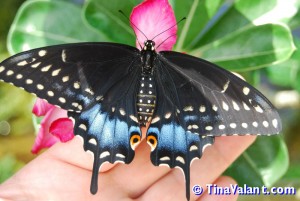 The beautiful spicebush butterfly lays its eggs on this plant so when their unusual looking larvae hatch on it they have the food they need to grow, make a chrysalis in a rolled up leaf and then hatch into a beautiful black swallowtail butterfly to begin the life cycle once more. Besides the Spicebush Swallowtail, Papilio Troilus, it is also a host plant for the awesome huge Promethea silk moth, Callosamia promethean, and the Eastern Tiger Swallowtail, Papilio glaucus.

However, I was disappointed that my two plants did not get a crop of berries like the ones I saw in photos. It was after more reading about this plant that I realized that you must have a male and female.  However, most of the sources did not sell a named male or female plant. So, until I find out, which my plants are and remedy the situation I will not have berries for the birds. This year I have several dozen in the nursery so I hope to mark any that have berries as female.

The consensus of wild life sites and books indicates that many different birds eat the berries or drupes. Game birds such as quail (bobwhite), grouse and pheasant all devour them when they grow in the wild along open fields, thickets and along streams. Songbirds such as the great crested flycatcher, the Eastern kingbird, the verry, the hermit

Thrush, the gray checked Thrush, and the wood thrush all seek them also. Both the red-eyed and the white-eyed vireo like them. Catbirds, robin and white-throated sparrow all love them too.

Since they are attractive to songbirds and game birds they are a good plant for a native garden for birds. But remember that in order to have berries you need both a male and a female plant.