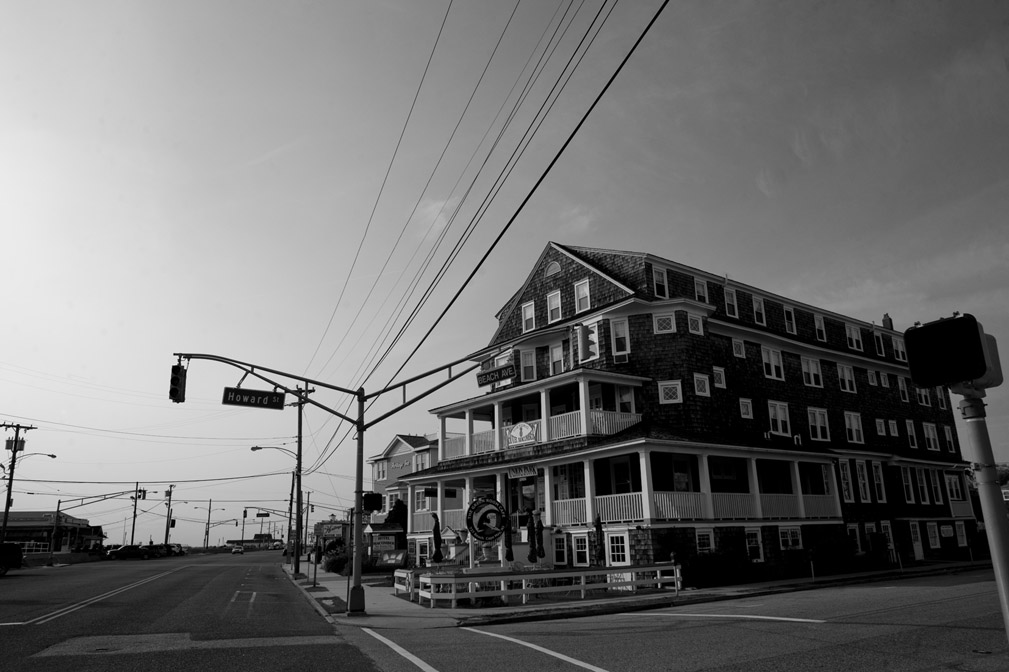 Conveniently located, reasonably priced rooms, a great restaurant, ghosts. What more could one ask for in Cape May?

The Hotel Macomber always brings back great memories for me. When I first started coming back to Cape May in the 1990s (after summering here as a kid in the 60s and 70s) I would stay at the Macomber because the rooms were reasonable, the location was right across the street from the beach and most of all—it was haunted.

In those days, I had not yet written even one ghost column, let alone any books. I loved ghosts and hauntings, and I was in the early stages of exploring my psychic abilities. Cape May was like one big magnet for me. I can remember the thrill of going on the walking ghost tours to see what I could sense from the street level. Of course, getting inside each house allowed me to really get a psychic heads up, but that also meant having to pay to stay. Walking around town and making stops in front of Cape May’s many haunted homes allowed this psychic medium to become one with the paranormal energy of America’s oldest seaside resort. It started a long love affair with a haunted seaside town that continues to this day.

I have stayed in many of the rooms in the Macomber over the years. Some rooms have been active, others have not. The most famous room in the hotel, room 10 on the first floor, has a long reputation for bumps in the night—the paranormal kind of course. I have stayed in room 10 several times, and it is one of the most relaxing rooms I have slept in. Strange, you might say? A room so paranormally active and I was able to sleep like a baby? Yep. That is just the way it works. Some ghosts have very calm personalities, and  may actually love a particular room so much that they too enjoy a good night’s rest. 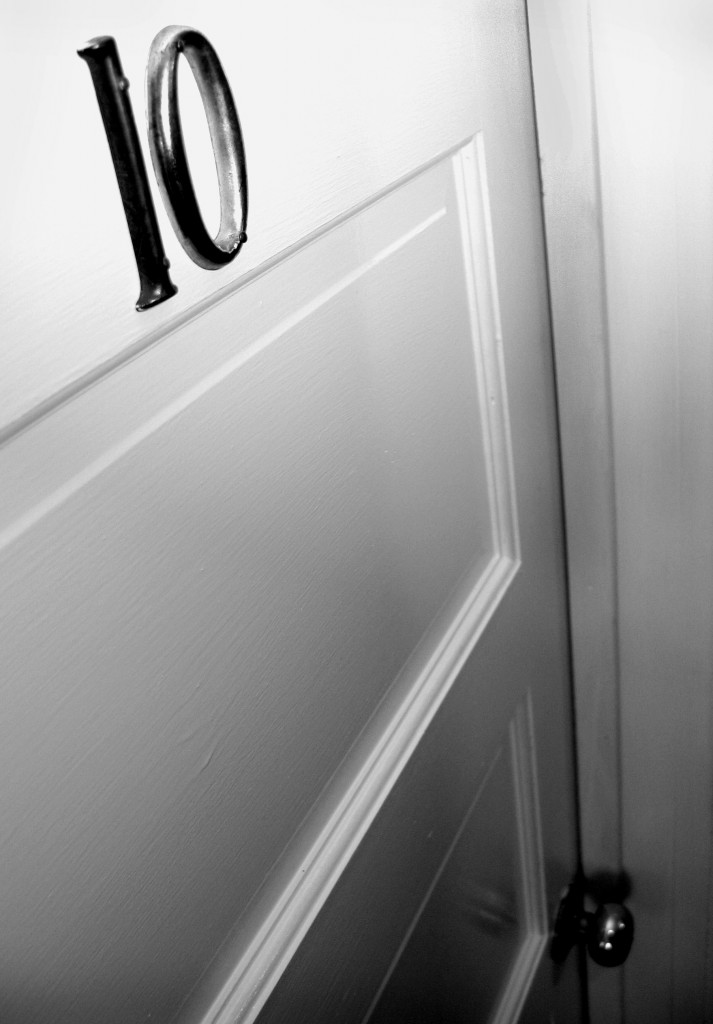 The room 10 haunting is attributed to an older woman who is referred to by many as “the trunk lady.”

The story goes like this: A woman came to Cape May with her family for many years. Her husband died and her children convinced her to keep coming to her favorite hotel and her favorite room…#10. June and November seem to be two months the room is most active. Years after first staying here, I was able to find out more about the “trunk lady” from the son of a former owner of the hotel. The previous owner’s son told me “the trunk lady’s”  name was Irene Wright.

Irene Wright was a regular at the Macomber. She was called “Miss Wright.” It is thought she was never married nor did she have any children. She did come with a large trunk, as many vacationers did back then, packing enough for a long summer’s visit. She stayed in room 10 and apparently could talk one’s ear off. She also wore large quantities of perfume. From what I can ascertain, she died sometime in the 1970s. She may have been coming to Cape May as early as the 30s, I have never been able to find out. According to someone who knew her, she loved Cape May and room 10 of the Macomber. Although, I was told she stayed in various places in town each summer.

My experience one night in room 10 was quite paranormal. We had gone to bed around midnight, after running some tapes down in the lobby to try to collect EVPs. It was the Monday night of Labor Day weekend back in 2006 and the town (and the Macomber) literally emptied out. I had just fallen asleep when there was a loud banging on my door. I jumped up and said, “Yes?” No one answered. I opened the door and looked up and down the long corridor, but there was not a soul in site. A few minutes later I was back asleep and the banging started again. This time I jumped up and flew open the door to reveal—nothing. I think I was more expecting to find another guest, locked out of their room, rather than a ghost. You rarely see ghosts, guests are more easy to spot.

I decided to leave my cassette tape recorder running on the table in the hallway across from our room. If someone or something was to knock again, I would capture the sound and maybe a ghostly EVP or two. EVP or electronic voice phenomenon is one of the few bits of tangible evidence we can capture in a ghost investigation.

Next came the sound of doors opening and slamming closed. Now I was wide awake. Realizing the laundry room was right next to room 10, I had a theory that a late night housekeeper might have been doing some laundry. It was, after all, right after a major holiday weekend and there were probably plenty of linens and towels to wash. The tape later revealed the sound of doors opening and closing and a few other odd bangs. In the morning, I went downstairs and mentioned it to the front desk clerk. I was told there was no one cleaning or doing laundry during the night, as a matter of fact, we were the only guests in the hotel and housekeeping had gone home earlier. Maybe the living housekeepers went home, but the dead ones were busy doing something.

Leaving a cassette tape recorder running in the hall and later in the room captured several EVPs.

Listen carefully within the white noise. A voice says, “We love this bedroom.” Here it is looped together several times.

Listen to it several times. Everyone seems to hear something different with EVPs, as each of our brains try to interpret what the random sounds are actually saying. I think it says, “We love this bedroom,” which makes sense. Right after that, a man’s voice says something like, “I’m happy to hear that.” Listen to the next EVP and see what you think it says. Headphones work even better for listening to EVPs.

Here is the same EVP looped seven times. The distortion comes from the noise reducing software. The problem with cleaning up EVP recordings is that the initial EVP may become morphed into something completely different in the process.

The fact that this is a man’s voice indicated that the ghost in the room (at the time) was someone other than Miss Wright. The hotel is home to several ghosts and ghosts are transient. They come and they go, just like the living come and go, especially to a hotel at the beach. Whoever I caught on tape that night back in September of 2006 knew I was there and knew that I was asking questions. Ghosts seem to have the ability to see or hear us, even if we cannot do the same in return.

During another visit to the hotel, I had befriended the new night manager. A group of us had been hanging out in his suite and enjoying some wine when we heard doors slamming in the hotel. It was off-season and we were the only ones there. Each time we would go to investigate, we would find all the doors properly shut and everything in place. When my friends and I finally decided to go downstairs, we found the lights in the lobby had been dimmed to about 10% and the room felt strangely cold. My friend Pierre was the only guest staying at the hotel that evening and both he and the manager slept in the lobby the rest of the night!

Fall is the best time to experience the ghosts of the Macomber, before the hotel closes for the winter.  In the summer, just enjoy the great location and the comfortable rooms. The Union Park Restaurant, located inside the Macomber, is also a great place to eat . Many years ago, a previous owner was renovating the kitchen and dining room, when he saw a woman in an old-fashioned dress float through the room and disappear into the kitchen. When he went to check, no one was there. Stories suggest this was a former waitress who choked on a chicken bone and died. I have not been able to substantiate this chicken bone story, but I have personally experienced some great paranormal activity while dining in the Union Park.

One night during the fall I was dining with friends at Union Park when the chandelier right above us started flickering wildly, while all the other chandeliers stayed perfectly lit. I was not having chicken that night by the way, so I don’t think it was the ghosts warning me about bones!

The Macomber will always hold a special place in my heart in Cape May. I love staying here and I think you will as well. If you want a great overnight ghost adventure, make reservations to stay here in the off season. Chances are you will experience something paranormal. Just remember to tell me about it.

To read more about the ghosts of the Hotel Macomber, check out The Ghosts of Cape May Book 1.

You can also visit the Macomber’s website here. Just remember to come back!

If you have had a Macomber ghost experience—let us hear about it below.