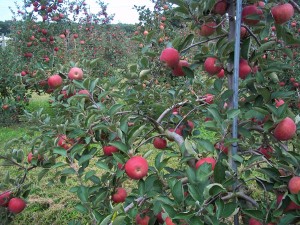 Trees laden with glossy red apples are a beautiful sight in orchards along country roads throughout southern New Jersey. Stands are heaped high with baskets of apples and customers flock to buy and taste those first crispy, juicy delicious apples of the season. Apples have come a long way from the sour, little fruits on the trees planted by Johnny Appleseed for “cider.” Trees are grafted with choice varieties that produce tasty and beautiful apples that are delicious to eat right from the tree. Apples are also a favorite for cooking and are delicious baked, stewed or fried

Bright sunny days and cool nights are just perfect for growing apples says Franklinville orchard man Joe Nichols who worked with his Uncle Chet growing apples since he was 10 yeas old. Now Nichols farms about 50 acres of fruit trees on rural Royal Avenue in the same area that his great grandfather had orchards more than 100 years ago.

Many orchids now use drip irrigation to water plants when needed and windmills with gasoline-powered engines to move air on frosty nights in April and May. Weather and temperatures are very important to an orchard man and just a one-degree drop in the early morning hours at the wrong time of the year might ruin a crop.

Apple season often begins with Mollie Delicious in mid-summer, followed by Gala, McIntosh, Cortland, Jonathon, Red and Golden Delicious, Empire, Mutsu, Fuji and Rome. These are at most local farm markets. Since people are looking for a good taste, which is the result of  fruit allowed to mature on the trees a little longer, local apples are quite popular during fall.

Many remember being told as children, “An apple a day keeps the doctor away:” Considering that they are high in fiber, low in Sodium, cholesterol free, rich in Potassium, high in Vitamin C as well as Thiamin, Riboflavin, Vitamin A, Phosphorus, and Calcium there just might be something that rings true to this. Since there are only 80 Calories in an apple they make a great snack for kids and adults. Apples are one of the most popular fruits for eating and baking, but in the fall the popularity prize for pies, cobblers, cakes and sauces. 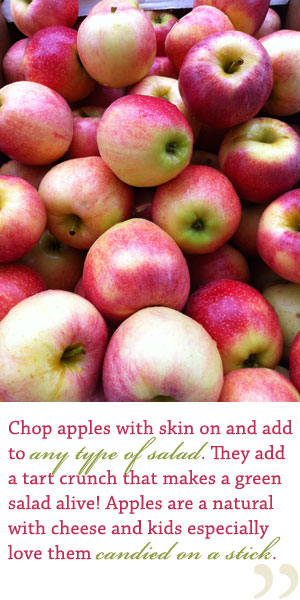 An apple can be sliced and put in a microwave with just a sprinkle of sugar and cinnamon for a quick dessert that makes the whole house smell wonderful. People on low-sugar diets can skip the sugar or add just a pinch of sweetener after the apple cooks. Nothing is nicer than a pan of baked apples in the oven to make the house smell warm and cozy. Core apples for baking, but leave the vitamin and fiber-rich skin on. Fill the cavity where the apple has been cored with a mixture of equal parts of white sugar, brown sugar and flour. Chopped nuts may also be added. Pour some maple syrup over each. Add more of this mixtures and top with a generous pat of butter. Add a cup of water to the pan and bake at 350 degrees until the apples are soft. Each variety has a different time at which it softens when cooked. Theses keep well refrigerated and can be warmed in the microwave.

Chop apples with skin on and add to any type of salad. They add a tart crunch that makes a green salad alive! Apples are a natural with cheese and kids especially love them candied on a stick.

To make a delicious hot apple beverage that will make your home smell like autumn, try this. Bring to a boil about 6 cups of water, add 2 pounds of tart apples that have been sliced but not peeled, Cover and simmer for about 15 minutes, add 6 three inch cinnamon sticks. Let settle for about 10 minutes and serve warm with a cinnamon stick. Apple slices may be served in beverage or eaten as dessert.

A little bit of trivia to remember is that about a quarter of the apple’s volume is air. That is why they float and became popular in the old Dunking for Apples game that kids used to love to play at parties.

Apples have been around for over 4,000 years, and there are now literally thousands of varieties of apples worldwide. The apple is native to Europe and Asia, and is now also grown worldwide in temperate regions. The United States produces approximately one-third of the world’s crop. 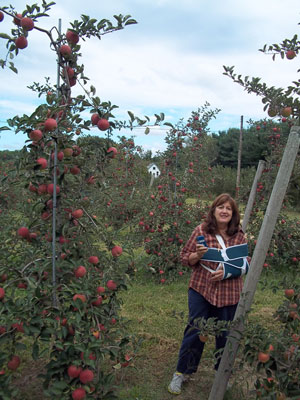 Apple history tells us that apples probably originated in the mountains of Kazakhstan. It is supposed that people traveling the silk route might have picked up apples and helped to spread the seeds. Since apples do not come from true seeds, anyone who wants edible apples, plants a tree that has been grafted. In the first century A.D., the Roman Pliny the Elder listed 36x varieties of apples. Apple trees can live for hundreds of years.

The Pilgrims brought the apple to the United States in 1620 and French brought the apple to Canada. One of America’s fondest legends is that of Johnny Appleseed. There is truth behind this treasured story. John Chapman, born in Leominster, Massachusetts in 1774, is credited with planting over 10,000 square miles of orchards, but they were all from seeds. The trees yielded an assortment of sour apples good only for cider, which soon turned to alcohol. A wonderful read with fascinating details on this and much more about apples is found in Michael Pollan’s book, The Botany of Desire.

Early settlers grew apples because they stored well and had many uses. Every one drank cider (“hard” as it might turn), ate apple butter and, of course, pies were also favorite foods. Apple bees were a festive occasion where the participants cored and dried apples for storage.

Today homeowners might want to wrap apples that have no blemishes and store in a cool place that will not freeze, such as a root cellar, attic, and porch. Certain local apples keep well into winter if stored in a cool place.

It is not too late to plant a few old fashion apple trees in a sunny spot. The county extension service has pamphlets on home orchards. 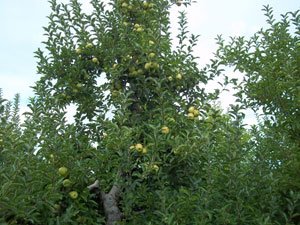 In a saucepan, combine the ingredients and bring to a boil. Reduce the heat and simmer for 1 hour. Cool. Serve as a spread on toast, ginger snaps or cake.

Wash and core apples, cut and simmer with a small amount of water to keep them from sticking. Pulverize in food processor or blender. Can also run through a food mill. Measure amount needed for butter; enjoy the rest as a dessert or side dish.

Mix flour, salt, baking powder, and sugar. Cut in Crisco and butter. In a small bowl, beat together milk, cider vinegar, and egg. Add this to dry ingredients (sometimes a few more drops of milk might be needed). Mix only till moist.

Divide into 4 flat balls, wrap and refrigerate for at least 1 hour. Roll from center out on a floured board to about ⅛ thickness.

Peel and core apples. Set aside. Boil water and add sugar, brown sugar, and butter to form a syrup. Cook about 10 minutes. Cool.

Roll out pastry and cut into 6-8 inch squares. Place apple in center. Sprinkle with sugar and cinnamon, allowing the cavity to fill up. Dot with butter. Pull up opposite corners of dough. Moisten with water or hold together.

Lift carefully to a deep baking dish. Pour syrup around the dumplings. Bake at 425 degrees on bottom rack for 30 minutes. Reduce oven to 350 degrees for another 30 minutes. Serve warm with cream or ice cream.

Melt the olive oil or bacon fat in a large skillet over medium heat. Add the sugar and cook, stirring often, until the sugar browns, about 4 minutes. Reduce the heat to medium-low, add the onion, and saute it until it is golden, about 5 minutes. Add the cabbage, apples, vinegar, and caraway seeds, and stir to blend.

Place the sausage links and the potatoes on top of the cabbage mixture. Season with salt and pepper and pour the beer over all. Bring the mixture to a boil over medium-high heat; reduce the heat, and simmer, covered, for 45 minutes. Taste, adjust the seasonings, and serve hot.

Pare, core, and thinly slice apples. Toss with juice of a lemon. Sprinkle with sugar, flour, and cinnamon, and then mix well. Take half of the pastry and roll flat with rolling pin. Line a 9″ or 10″ pie plate with the pastry. Fill with apple mixture. Dot with butter (or margarine).Take the remaining pastry dough and roll flat. Place dough on top of apple pie mix. Crimp along edges creating a scalloped edging. Take a knife and cut slits into top pastry for steam to escape. Bake in a 400 degree oven for 50 minutes or until crust is brown. Let cool and serve. 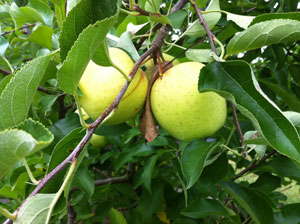 Cortland: A medium-to-large red-and-green-striped apple, it is crisp, juicy, and sweetly tart. Because of its white flesh resists browning, Cortland’s are favored for salads and fruit cups.

Golden Delicious: Grown in most regions across the country, The Golden Delicious (or Yellow Delicious, as it is sometimes called) was discovered in West Virginia in 1914. A medium-to-large pale yellow apple that is mild and sweet, it is crisp when harvested in September and October, its pale flesh often becomes dry and soft. Its skin shrivels when not kept under refrigeration. Particularly desirable for snacks, fresh desserts, and salads it is a good all-purpose apple.

Red Delicious: Is grown throughout the U S and is America’s most popularly grown apple. It is crisp and juicy when harvested in September and October, but its sweet and mild-tasting flesh is all too often a mealy when found in winter in the supermarket. It is best used for snacks, salads, and fruit cups.

Empire: The New York State Agricultural Experiment Station introduced a cross between Red Delicious and McIntosh, the Empire into commercial production in 1966. Grown mostly in the Northeast and upper mid-western states, this medium, red-on-yellow (sometimes all-red) apple is crisp and juicy. With its sweet and spicy flesh, it is one of the very best for eating out of hand, in salads, and in fruit cups.

Fuji: Was developed in Japan in late 1950s and by crossing Ralls-Genet and Red Delicious the popular variety has yellowish green skin blushed with orange-red stripes, it has crunchy, crisp, textures and is sweetly tart. Fuji retains its flavor even when stored at room temperature and develops a better flavor when held in long-term storage. This is one of the best apples for eating out of hand, or use in any recipe.

Gala: Developed in New Zealand in the 1930s, it is a cross of Kidd’s Orange Red and Golden Delicious. The thin, red-orange skin with red striping over gold is fragrant and fresh tasting, crisp and juicy, it is a good apple for eating out of hand, for salads, and with soft, mild cheeses. Makes good pie, cake and cobbler as well

McIntosh: John McIntosh discovered this apple in Ontario, Canada, in early 1800s now in the top three grown in the U.S. It is a medium red-on-green apple that is sweet, crisp, juicy, and smells like and apple! They are a favorite to eat fresh in autumn, but later they are best used for sauce. McIntosh apples collapse when baked whole or in pies.

Wine sap: The native originated in New Jersey in the late 1700s, it is one of the oldest apples still in commercial production and is a favorite in the Mid-Atlantic States. A medium size fruit with a thick red skin, crisp, crunchy, juicy fleshed wine sap has sweetly tart flavor that some say has a winy aftertaste. This is a good all-purpose apple.

Mutsu: a dense, juicy eating apple maturing in late October. It is greenish yellow that shows a light reddish blush when ripe. A large apple this one is good for eating fresh or in recipes.