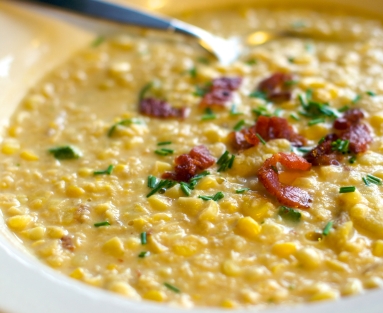 When the time comes to pull sweaters and winter clothes out of the closet, it is also the time to get back in the kitchen and cook. Fall foods are some of my favorites. Big bold and hearty flavors in the forms of stews, chowders, and braises reenter the kitchen after their summer hiatus. Of all the seasons to cook in, fall is my favorite. There is still a variety of fresh produce to work with and the cooler temperatures make it a pleasure to be in the kitchen.

Chowder may be my favorite type of fall soup. Rich and hearty, chowder can be enjoyed as a soup or a meal unto itself. What constitutes chowder is often debated. The strict interpretation of the word, as defined by puritanical New Englanders, is a thick shellfish stew that must contain dairy, potatoes and salt pork/bacon. Away from Harvard Yard, chowder is any thick soup containing potatoes. Corn chowder is a common variation that can also be made with or without shellfish.

Regardless of the ingredients, the technique for making a wicked good chowda’ remains the same. When using a pork product such as bacon or salt pork, it must be rendered first. Rendering uses low heat to slowly melt the fat releasing all its rich flavors and it leaves behind the crunchy meat which adds texture to the final product. The rendered fat is then used to sweat the vegetables.

Sweating is the key step to developing the flavor of your chowder. Done over low to medium heat the purpose of this step is to soften the vegetables and extract the flavors melding them together. Adding salt during this phase aids in extracting the liquid from the vegetables as well as building flavor. The next step is adding flour to form the roux which will provide the chowder with its viscosity. Add enough flour to absorb all the fat, then cook the roux out over medium heat. Slowly add in the stock, whisking to ensure a smooth texture. The next step is to add the potatoes. Red, Yellow, Purple – skin on or off – are all personal decisions the cook gets to make to add their unique spin to the chowder. The one rule that must be followed is to cut the potatoes uniformly. This will allow them to cook evenly providing a palate-pleasing texture. When the potatoes are three-quarters cooked, add the clams (if making clam chowder) or other proteins that will toughen with prolonged cooking. When adding dairy, either milk or cream can be used depending on your diet or cost parameters. Cream is my personal preference because of its richer fuller flavor. It also provides a smoother texture to the chowder. That is chowder 101.

Following a basic blueprint in cooking allows the cook to experiment with the flavor profile of the product while being assured the basic structure of the dish remains sound. In making a new chowder, I might simply add roasted garlic to the base chowder recipe. This will result in a completely different flavor profile while the steps in making it remain the same.

In that same vein let’s say you really enjoy clams casino. The basic clam chowder recipe can be enhanced by adding red and green pepper to the celery and onions while sweating. Adding garlic and oregano will further build the “casino” flavors into the soup. This approach to cooking allows for many variations within the same recipe structure. To take the casino idea to the next level, garnish with fresh bread crumbs toasted in olive oil and fresh herbs.

The best way to “create” new chowders is to take something familiar and build that concept into the base recipe. By adding sautéed, thinly-sliced beef mushrooms and onions and also incorporating provolone cheese, you now have Cheesesteak Chowda. Certainly heresy in Beantown, but if made well, it just might inspire Brotherly love at home. Not everything translates into a good soup. I worked with a sous chef that tried Rueben Chowder one day with disastrous results.

This month try some Chowda variations that will have your friends and family wondering when you became so creative in the kitchen. Apple-Bacon-Cheddar Corn Chowder and Clam Casino Chowder will hit the jackpot with your family. Until next month, Bon Appétit.