If you ever have seen a live pine tree from the forest lit with real candles, flames flickering, the memory is forever. 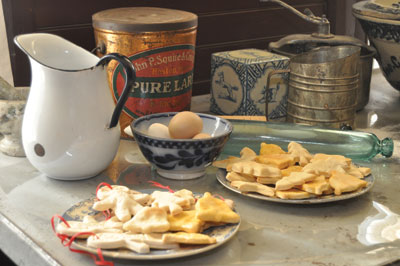 And, so it is, with each holiday season I visit Cape May’s Emlen Physick house and remember a night long ago when Grandmother, a Victorian lady, surprised me with a moment of magic. She invited me into her parlor, warmed with a wood-burning stove, and there, in the bay window, was the evergreen my Uncle Bud had cut at Pine Run.

It was aglow with tiny candles in silver holders. Ropes of cranberries and popcorn outlined the shape of the tree. Homemade gingerbread boys and girls, sugar cookie angels, red velvet bows, tinsel and Christmas cards framed in silver danced from the boughs. The candles flickered for just a moment and in a flash Grandmother smothered each little flame with her silver snuffer. I think I was two, maybe three. I asked her to please, oh please, light the candles again. She just smiled the way she always did and shook her head no. Each year I hoped for a repeat performance. The tree with its fresh cut smell filling the parlor was always there in the bay window. The decorations grew in number with the years. The little beeswax candles always balanced on the boughs, but Grandmother never lit them again. That was a once in a lifetime treat.

We know the origin of the Christmas tree is Germanic. A story is told that in the 16th century German preacher Martin Luther was walking in the forest. He looked up to see stars shining through evergreen branches. The sight was so beautiful he recreated the vision with real flickering candles on live green branches and told his children the scene reminded him of Jesus, who left the stars of heaven to come to earth.

At the Physick house, there is a tree with real candles but, of course, they are never lit due to fire hazards. “In Victorian times, children were called to the parlor for the lighting of small individual candles for the briefest period of time,” says Dr. Robert Heinly, Museum Education Coordinator. “A servant stood by with a bucket of water and a wet sponge on a stick. Any spark was doused. As soon as the family left the room, the candles were extinguished immediately.” 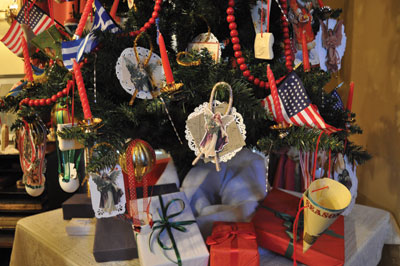 The Victorian rooms at the Physick house show the evolution of the Christmas tree.

“The original ones were small table top trees,” says Dr. Heinly. “They looked something like Norfolk Island pine and were called tannenbaum, German for fir tree, and thus the popular song O Tannenbaum, O Tannenbaum, the folk lyrics dating back to the 1500s.

“These small trees were decorated with edible things: strings of popcorn, strings of candy, strings of dried fruit. There were homemade gingerbreads and springerle, a sort of anise tasting cookie. They made cornucopias, little horns of plenty, and filled them with candies and nuts. And they topped the branches with small candles to be lit for just a moment.”

On Christmas morning, the children raced to the tree to pick off the edibles and enjoy the morsels. Each person received one gift. “In the German tradition a pickle was hidden deep in the tree. The person who found the pickle got a second gift,” says Dr. Heinly. 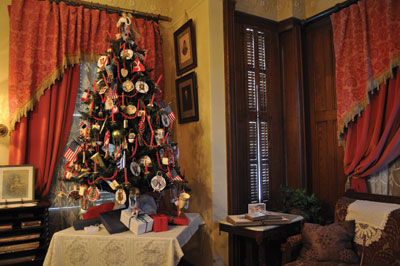 “Now of course, the pickle tradition is carried on with a glass ornament, but then it was a real pickle.”

The Christmas tree tradition caught on in England when Queen Victoria’s husband, German Prince Albert, set up a tree in Windsor Castle. Once the palace tree was publicized evergreens spread their boughs throughout the kingdom, and across the Atlantic in Victorian era homes in the United States.

In the Victorian period, 1837-1901, live greens were the favored way to deck the halls. Garlands of greenery framed doorways, wrapped pillars, draped mantles and picture frames. Red bows and berries and sometimes lace added to the drama of the abundant use of holly, ivy and mistletoe. Holly, with its thorny edges, was believed to chase away witches and the devil. Mistletoe placed in a child’s room was credited with protecting the youngster from evil spirits. The legendary power of greenery can be traced back to pagan rituals of fires and dancing during the winter solstice as a reminder that spring will come.

Victorians used greenery, especially mistletoe with its little white berries, in kissing balls tied with big red ribbons and hung in doorways and arches. The balls are created from evergreen boughs, holly and ivy. Victorians decorated them with little apples and even pears. It’s a kissing zone under the mistletoe to either linger there or avoid, depending on the company.

The size and complexity of the Christmas traditions and the tree grew with the success of the Victorian era and the Industrial Revolution. In the mid-Victorian years, in the 1860s, the tree was still displayed on a table top, but the branches were heavy with decorations. 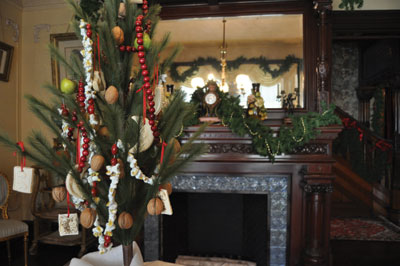 Small blown glass ornaments and paper or fabric flags were popular. Ladies crocheted snowflakes and snowmen. Families had fun making decorations. They created garlands from paper circles, and shaped doilies into fairies and angels. “Scraps were popular,” says Dr. Heinly. “Scraps of ribbon and fabric were fashioned into toys and dolls. Christmas cards were saved and encircled with glitter or lace.”

The late Victorian era tree in the 1880s grew, now from floor to ceiling. Colorful decorations were factory-produced and sold in shops. The tree was often laden with tinsel then being mass-produced. Originally, in the 1600s Germans made tinsel from real silver pulled into wafer-thin strips. The tinsel legend is about a poor woman who was unable to afford decorations for her family’s tree. She prayed for a miracle. During the night spiders lodged in the tree and coated it with webs. Holy Christmas spirits turned the webs into shimmering silver delighting the good woman’s children.

“The first electric lights were added in the 1890s,” says Dr. Heinly. “They were individual candles, each with its own cord. Imagine the complexity of that.” Soon after, the first string of electric lights was invented in New York City. In 1902, the National Biscuit Company factory in Philadelphia introduced animal crackers as Christmas tree ornaments.

“As the trees got bigger, the decorations more elaborate, so too did the number of presents per person.” says Dr. Heinly. “And Victorian holiday meals grew into banquets with 10 or so elaborate courses on tables with fine linens appointed with sparkling cut glass, sterling silver, fragile porcelains – a plate and a fork, knife or spoon for every course and every type of food.” Most tables were set with place card holders, oyster forks, pickle forks, fruit knives, butter knives, knife rests and finger bowls passed before dessert to dip in a corner of the napkin, wipe the mouth and rinse the fingers. 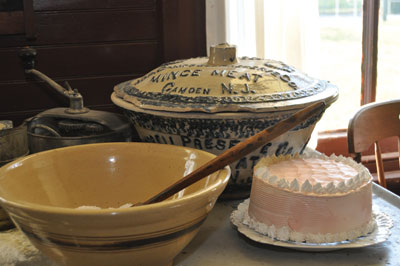 “In Cape May, seafood would have been richly featured,” says Dr. Heinly. “There would be oysters and clams, and perhaps a fish dish. There would be a fowl course, perhaps pheasant or turkey or goose and a meat course, beef or mutton. Salads were served later in the meal to aid in digestion. There would be molded gelatins with fruit, and a cheese course. There certainly would be dessert, mince pie, plum pudding. Each course may have its own wine.

The serving of the plum pudding was carried out with great ceremony at Victorian tables. The pudding was made on Stir-Up Sunday, at the beginning of Advent. Ingredients were suet, bread crumbs, raisins, and spices, and each family member took a turn at stirring the pudding and making a wish. A ring, coin and thimble were tossed into the batter. The mixture was placed in a muslin sack that hung until Christmas, when it was boiled for hours in beef broth. It was doused with brandy, lighted, topped with holly and presented to dinner guests, who reveled at the sight. Then came the suspense. The serving with the ring meant marriage; the coin, wealth and the thimble, a happy but single life. 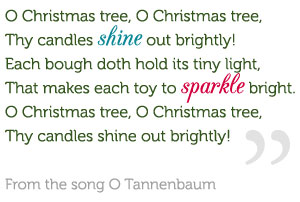 During dinner the sound of caroling might be heard under the street lamp. Victorians composed many of the holiday carols still sung today. There were after dinner sing-a-longs in the parlor by the piano or organ while the Yule log burned. (It was to be large enough to burn for the 12 days of Christmas.) Children popped open their crackers, the colorful cylinders left by their plates, filled with trinkets. There were pantomime performances, charades and games: checkers, dominoes and chess. Christmas stories were told. Some were from books, some from the Bible, and others were of the family Christmases in the old country or of pioneer days in this country. The Victorians revered the art of conversation and were the last generation to create their own entertainment –before movies and television.

Theirs is a magic that lingers in the glow of holiday candle light all around the Victorian village of Cape May.