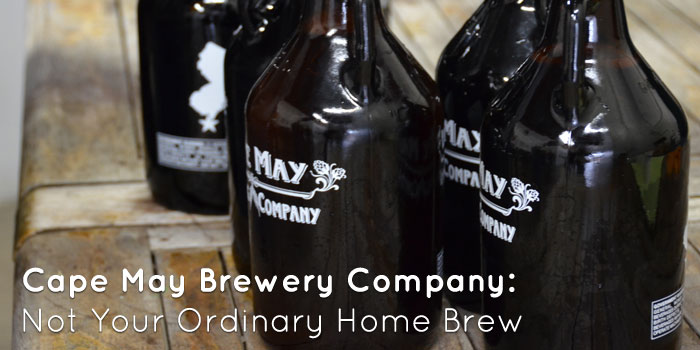 This article originally ran in the Spring 2012 issue of Cape May Magazine. Some of the references are to the brewery before its expansion, which Ryan talks about in the video. 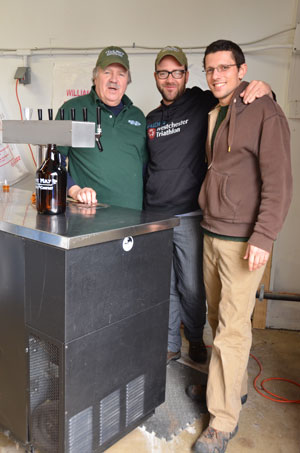 One thing you should know before you read this – I don’t like beer. I drink a lot of alcoholic beverages, BELIEVE ME, but beer is not one of them, until now.

The other thing you should know is that as an entrepreneur myself – in addition to my duties as editor at Cape May Magazine, I have also been in business for over 30 years – I get a certain lump in my throat when I see young entrepreneurs willing to follow their bliss and this is where our tale begins.

On a fairly mild Saturday afternoon in February, I found myself on Breakwater Road turning into the Cape May County Airport. I’d been hearing great things all summer and fall about the two young guys and a dad who started a micro-brewery out at the airport. I followed the Cape May Brewery signs and parked in front of a garage with several very happy people standing about.

Going to a Cape May Brewery tasting is like going to a party. True, this is a party which starts at noon, ends at 4 p.m. and where you might not know anyone there. But it doesn’t really matter. What does matter is that everybody is having a good time. And it was not too hard to spot the party’s hosts. This will sound like a segue from the Dating Game, but it can’t be helped.

Bob “Mop Man” Krill is behind the taps pouring the samplings. Bob is a retired pharmaceutical executive and, according to the beer guys’ website, “has been drinking beer for 65 years and finally decided to make some.” 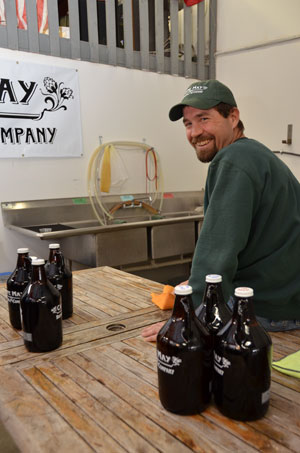 The enthusiastic guy with the baseball cap on, who talks really fast is Ryan Krill. He holds a bachelor’s degree from Villanova University and a master’s degree from NYU – that’s New York University to those of you not in the know. Prior to becoming a professional brewer, he worked in real estate finance.

And the guy moving swiftly about the brewery checking equipment, temperatures and ensuring the beer is fermenting is Chris Henke. Chris has a bachelor’s degree in mechanical engineering from Villanova University and up until quite recently was building satellites at Lockheed Martin.

So, those are our hosts. Girlfriends Kaysi Franceus and Allyson Corcoran, as well as Ryan’s mother, Pat Krill, are also on hand. Their sole employee is their friend “Growler Man” aka Mark McPherson. I corralled Ryan and asked him a few things about his “home brew” like how did all of this get started.

“So, I was a home brewer and I was introduced to home brewing by Chris. We are all brewers – myself, my dad, he’s over there pouring beer, and my college buddy Chris. It started taking off and we were brewing at my dad’s house in Avalon and we were saying, ‘This is nuts that there’s no brewery down here. There are wineries.’

“We opened up last July. It’s an interesting story because on 4th of July 2010 we were saying we should do it and Chris didn’t take me seriously. He was like, ‘Well, we don’t want to start a brewery now.’ And I was like, ‘Yeah, let’s do it.’ And it happened pretty quickly and exactly one year later, 4th of July 2011, we were in Cabanas drinking our beer on tap. It was really exciting to have it happen that quickly. 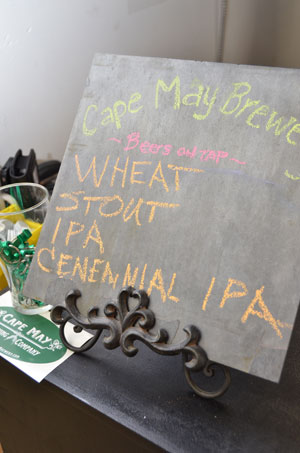 “We started real small. We’re still real small. We decided to manufacture everything ourselves. So Chris is an engineer with Lockheed Martin or used to be – so he designed all the equipment – this is all repurposed stuff.”

And here Ryan proudly takes me on a tour. Now remember we are in a pretty large garage/warehouse, but a garage nonetheless and everything is very compact. The brewing area is where it all starts and is about the size of a generous walk-in closet.

The stainless steel containers, at one time, were used to ship orange juice concentrate.

“We got them from a distributor near Trenton,” said Ryan. “Chris designed the stand, the burners, and we have a whole chilling system. When you make beer, you’re making a tea by heating hot water, then mixing it with grain and that’s called the mash.” The brewing process takes about 6 or 7 hours. 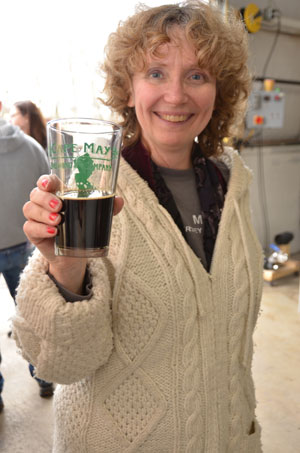 The fermentation process is next. That takes about 3 weeks. Ryan’s dad, aka Mop Man, built the white boxes which are temperature controlled rooms which operate with a simple window air conditioner and a space heater that maintains a temperature of 65 degrees.

There are multiple “batches” of beer fermenting at all times – a barrel or (31 gallons), and two barrel-and-a-half (45 gallons) containers. Once the beer has fermented, the batches are moved into the walk-in freezer. The cold temperature clears the beer out, removing the cloudy quality of the liquid.

“We got the walk-in from Quiznos in Philly,” said Ryan. “And it all works perfectly. Everything here is used or we built it ourselves.” Even the containers used to inject CO2 are reconditioned soda kegs. “We did everything on a shoe string,” said Ryan, “and it’s working out fantastically.”

But how do they make money? Three ways. One – the Tasting which costs $11. You get a sample of four different ales. Second – Growlers. These very smart looking reusable brown bottles with Cape May Brewing Company simply printed on them cost $20 initially, and $10 when you bring them in for refill. And there were plenty of people there that day with their growlers in hand. Last, they wholesale kegs of their brew to four outlets – Cabana’s and Sea Salt both on Beach Avenue in Cape May; Lucky Bones, at the bottom of Schellenger Bridge as you come into town; and Good Night Irene’s in Wildwood.

Sometimes people are lined up before noon. And they sell out of product nearly every Saturday.

But let’s get to it. Let the tasting begin. 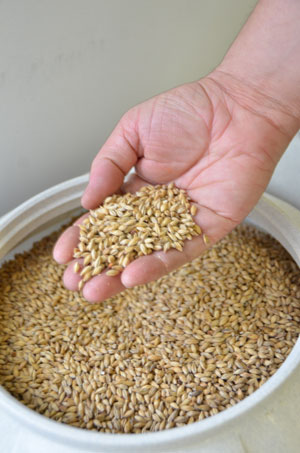 On this day our four choices are: a wheat beer, a stout, and two IPAs (India Pale Ales).

According to my very handy tasting sheet, the wheat beer is a pale, spicy, fruity, refreshing hefeweizen [“Hefe” means yeast, “Weizen” means wheat]) originating in Southern Germany. This is a pretty light beer and I can see serving it with a fish or poultry dish. It would be very refreshing, as suggested, on a hot summer day. It is also the selection with lowest alcoholic content (5%) and the least amount of hops (12 IBUs). So I will NOT be buying a growler of wheat beer. Just in case you were wondering – IBU stands for International Bitterness Units, a metric used to determine the bitterness of the beer.

The next selection is a stout. Described as being, “very dark, sweet, full-bodied, slightly roasty ale that gives a distant taste of chocolate-covered coffee beans.” And true to its description, this stout was, I have to say, a jolt to my beer tasting senses. And I did not like it – at first – and then with each sip – it grew on me. I could be wrong, but I would serve this with some pretzels, cheeses and sausages – and by the end of it would find myself and my stout drinking companions sitting around singing that famous beer drinking song, Ein Prosit. It has a 6.1% alcohol level and nearly three times the hops (32) as the wheat beer.

But, as we move into the India Pale Ales (IPAs), we get a little closer to my palette. And just what is IPA, I hear you asking. Ryan explains that they became popular during English colonial rule over India. Quite simply, the brew with the highest alcohol content and more hops was the one most likely to make the sea voyage without going bad. 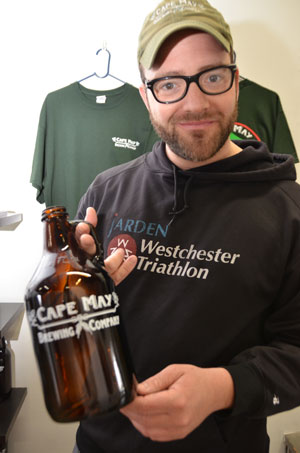 India Pale Ale is the third selection on my list. It is a “decidedly hoppy and bitter, moderately strong American pale ale. The beer emphasizes the hop aroma and flavor while muting the hop bitterness.” It has an alcohol level of 6.1% but the hops content is 65.

And now at last, we get to my favorite and the one I chose for a growler. Centennial IPA. Decidedly happy, I mean hoppy, very strong pale ale. Just what the doctor ordered at 1 in the afternoon. “Fill ‘er up Growler Man.” The Centennial IPA is named after the hop used in the brewing process for this beer. It’s very lemony/grapefruity and has been a huge hit, according to Ryan.

So what have we learned?

We learned that we must stray off the reservation once in a while or risk leading a tediously boring and narrow – taste wise – life.

We learned that it is still possible to task risks and be rewarded. And to that point – Cape May Brewing Company will expand in the spring to three garages – one for brewing, one for packing and organizational work and one devoted solely to tasting. Tasting days will increase with the warmer weather. Keep an eye on their website www.capemaybrewery.com for more information.

And we learned that I have suddenly acquired a taste for ale and an inclination to sing German drinking songs. Prost!