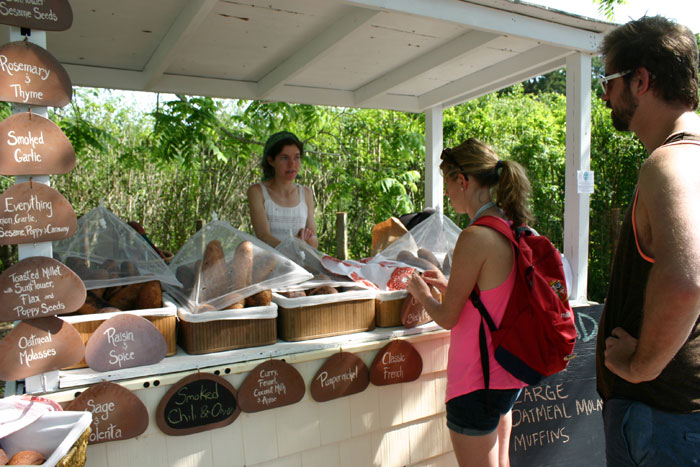 Her name is Elizabeth Degener. Her father calls her Biz. Her friends call her Liz. But to all who queue up on a Saturday or Sunday morning along Sunset Boulevard, waiting for her arrival – she is simply known as The Bread lady.

This is her third summer selling bread from a roadside stand located at the foot of the family’s Enfin Farms property. As one waiting customer observed, the bread stand looks like the one Lucy uses in the Peanuts cartoon. Lucy’s stand has a sign which reads “Doctor is in.” At 8:50 a.m. on a Saturday morning, nearly one hour before Showtime, The Bread Lady’s stand is unadorned.

I start to walk up the long driveway toward the farmhouse when I hear my name being called. It is The Bread Lady’s father, Rich Degener. He is tugging at some tree roots over on the far side of the selling area. He tells me he is clearing more land so she has room to expand. I ask him if he likes the attention his daughter is getting, and he looks up into the sky as though pondering the question, smiles and answers very proudly, “I don’t mind being referred to as The Bread Lady’s father. I like that. Just walk up the driveway, Biz is expecting you.” 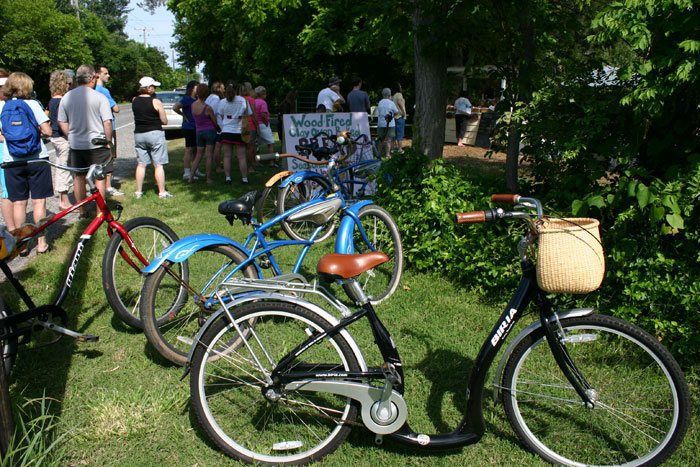 It is getting onto 9 a.m. and I am anxious to meet The Bread Lady so, even though I would like to stay and chat longer, I begin the walk up the long driveway.

When the farmhouse comes into view, I don’t see Elizabeth about, but I do eye the wood-fired clay oven which was shipped in from California in one piece. I call her name and she pops out from behind a bush near the farmhouse and greets me. She is wearing a simple white shift and she has a kerchief about her head which keeps her thick, curly hair in abeyance. Elizabeth introduces me to Wesley Laudeman, who runs the farming portion of the business, and then offers me some freshly made ginger tea. It is still warm, garnished with a slice of cucumber and mint, has quite a bite to it.

I bake myself, although not bread. Pies and cakes are me specialty, and I am anxious to investigate the clay oven which sits atop a concrete stand, which I estimate to be about four feet high and four feet wide.. Elizabeth opens the oven for me so that I might get a first-hand look at its inners and slips a lone loaf of bread, which did not seem to be quite done, back into the oven. Then we go into The Bread Lady’s inner sanctum – a commercial kitchen where all the bread has been readied in lovely cloth-lined baskets. Rounds with baguettes. Classic French bread mixed with Pumpernickels. Rosemary & Thyme loaves mixed with Raisin and Spice loaves, and all the assorted breads which will be offered on this already very warm Saturday morning. At the appropriate time, the baskets will be loaded onto the back of her father’s pickup truck and he will back it down the driveway. Within minutes, the empty Charlie Brown bread stand and adjacent vegetable market will be transformed into a slice of Europe.

But how did it all come about is my question.

It actually began in Ireland. Elizabeth studied International Business at the American College of Dublin. “On my summer holidays I would bounce around through Europe and go to farms through the WWOOFing program.” WWOOF hosts offer food, accommodation and opportunities to learn about organic lifestyles. “They give you,” she explained, “housing in exchange for maintenance on the farm. You learn about farm production, agriculture, in some cases baking, and anything that has to do with primitive living, really.”

Her travels took her to Germany for the summer proceeding her senior year and six months more after graduation. At that point, she became the cook for the community which included baking with a clay oven. After Germany, Elizabeth went off to India and also was the community cook there. In February 2010, she returned home. 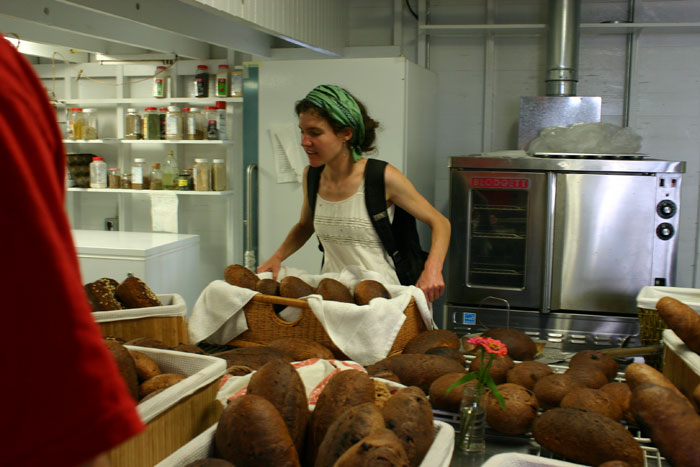 “I didn’t have anything started yet,” she said, “but I knew I wanted to so something with farming and baking. So we [she and her dad) ordered the clay oven. I didn’t know what to expect. I took a big chance ordering it. The first summer was really slow. This is the third season and it is catching on, especially with [adding] the vegetables.”

Wesley, who is in charge of farming, is a childhood friend of Elizabeth’s and also had experience in the WOOF program in Mexico and Canada. Otherwise, it is a family affair, which Elizabeth would like to encourage. “My brother [Rick] just put in a big raspberry patch,” she said. “And he’s hoping to have a big yield within the year. He has big plans. We thought about planting blueberries, but we wanted something with high yield that you can sustain a small livelihood from and raspberries are very lucrative. We can get a substantial production out of them in one year. Blueberries take five years.” Her hope is that her other brother, Geoff, currently living in Baltimore, will return home and join the operation in some capacity.

So, I am wondering, what is a typical bread baking week like?

“All week I’m kneading the dough. It rises once. I shape it and I freeze it. Then [on Saturday] I get up at 4 a.m. I take the bread out of the deep freezer. It thaws and rises again. [Meanwhile], I fire up the oven. On the first day it will take two hours [to reach its appropriate temperature]. Tomorrow, only one hour.”

Before I know it, it is 9:45 and time to load the bread baskets, topped with linen towels or mesh domes to protect them from the bugs and insects, onto the truck. By the time we walk back down the driveway, making sure we say hello to the resident ducks, which Wesley says do a fine job of keeping the bugs off the vegetable and flower gardens, the bread line has begun and is growing. Seasoned customers come with friends and make a morning of it, chatting and catching up on the news. Others peek around while The Bread Lady and Wesley hang up the wooden signs which specify the choices. Within minutes, the stand and vegetable “market” have been transformed into a slice of Europe. 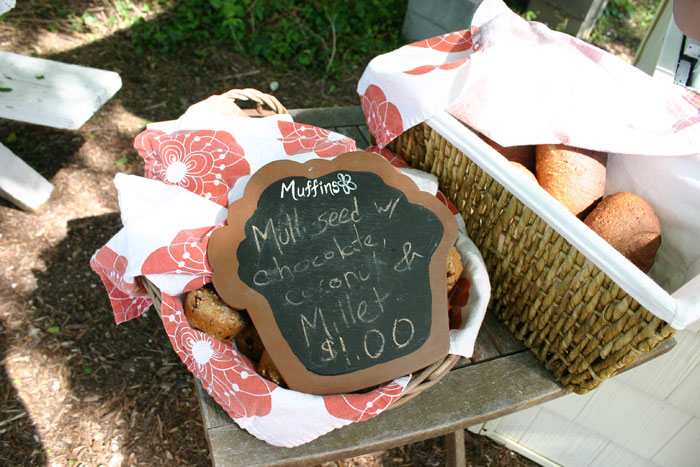 I dutifully take my place at the end of the line and when it is my turn buy – at the Bread Lady’s suggestion – a large loaf of Toasted Millet with sunflower, flax and poppy seeds, plus Chocolate Muffins for breakfast on Sunday. Who am I kidding? I wasn’t half a block down the road when I was enjoying one of those.

It’s a beautiful thing to see young entrepreneurs coming home to make a difference and I am sure The Bread Lady, who still hand-kneads all the bread, will be investing in a mixer one of these days. Her summer days of operation are Wednesday, Friday, Saturday and Sunday.

As an postscript to my story, The Bread Lady ran out of bread the next day and felt so badly, she went back to kitchen and made more bread and hand delivered it to a few of the customers who were left wanting. Now that’s a success story.