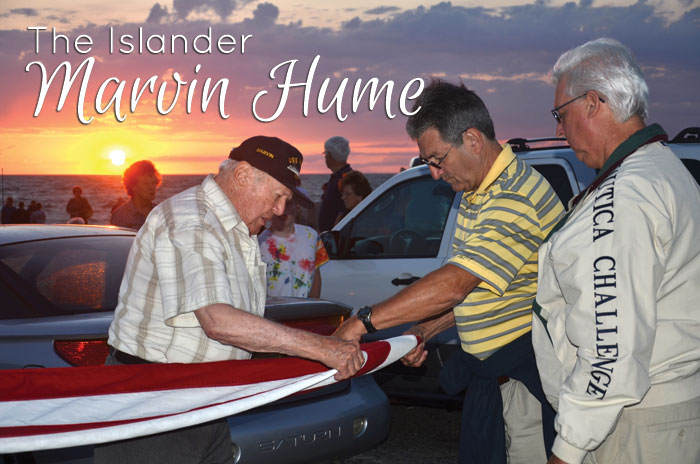 Since being wounded in The Battle of Saipan during World War II, Marvin Hume has been eligible for the prestigious Purple Heart, a military decoration which he refuses to this day. “I saw guys much worse than me during the war,” Hume explains. “Guys with limbs missing. I wasn’t looking to beat any drums. I just did what I had to do.”

His patriotism is unwavering as he presides over the flag lowering ceremony each evening at Sunset Beach to pay honor to the men and women who have served the country.

Widowed, Hume lives with his life partner Patricia Wolfe in Erma where he recently welcomed Cape May Magazine to discuss his life, and the love he has for his community and his country.

How long have you been in Cape May County?

I’ll give you the run-down. I’m originally from Collingswood, New Jersey. I love that town. I got out of high school in ’38. It was the Depression in those days. To see men and women go through our garbage can when it was put out twice a week looking for food makes an impression on you. They would knock on the back door and ask if there was work to be done for a sandwich. As a kid you never ever forget that. I got out of high school and went to work as a tool and die maker and went to college where I studied engineering. They let us get paid by the week, 10 bucks a week. 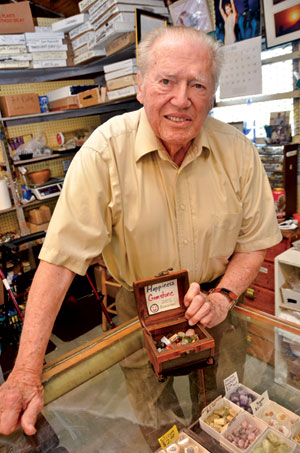 My dear friend from my youth, Joe Hittorph, we shoveled snow together, delivered newspapers. He went into the Navy and was assigned to the USS Oklahoma. Then Pearl Harbor hit. The Oklahoma was on the very end of what they called Battleship Row in Pearl Harbor. The Japs hit it. They launched torpedos as well as dive-bombers. The Oklahoma took nine torpedoes and rolled over. Joe was trapped, wounded but conscious. Two of his men attempted to get him out, but there was steel against steel. He ordered them to go topside and they survived. That’s how we know what happened. Joe was lost. The salvage crews never found Joe’s body.

After Joe died, I quit my job, quit college and went in the Navy. I worked as a tool and die maker and in engineering. I continued my education through an armed services institute.

The war went on. I still have a piece of Jap shrapnel that almost took my foot off. But when you’re young, you think it’s just a scratch and you don’t think anything of it. Had it all over my chest, my face. I looked like a freak in a sideshow. In the hospital ward some U.S.O. girls came in to entertain the troops. Guys were there who were messed up in so many ways. Another guy and I were sitting in chairs between our beds and I thought how nice it was that the girls were stopping at each bed. So when they came to us I invited them to step up. They said their schedule was very tight and had to move on, but then I saw them go and visit the other guys and spend time with each of them. Afterwards, we found out the other guys played a joke by telling the girls that the two guys at the end had leprosy and they shouldn’t get too close!

Anyway, I was sent home and went to work for McDonnell Douglass in St. Louis, where I worked for 10 years. I was an engineer there. We built the famous Phantom. I had a good job. I worked on the design of John Glenn’s space capsule and even worked on UFOs.

UFOs? Tell me about that.

Well, a lot of people didn’t know about UFOs. I was given photographs and film by the government of UFOs flying and I had to do line projection drawings showing the height and dimensions of the craft in relation to the size of other objects. It was done using a technique called triangulation in which you can determine the size and shape of an object in relation to what is around it, as well as its speed. McDonnell Douglass was one of the prime contractors for the government. We saw crafts that would be traveling at speeds of 5,000 miles per hour. You worked in that department with your mouth shut. For 35 years I never told anyone about the pictures or the work.

So these were crafts that were from other worlds?

Yes. You know, we’re still minute animals, make no mistake about that. They know we’re here. We know of three or four different types of creatures in Wright Patterson airfield. There have been UFO crashes throughout the world. They have 26 cadavers. This is not common knowledge to but a few.

How much of our own aerospace technology comes from extraterrestrial crafts?

You know the Stealth Bomber? We have that because of solid crafts that were seen on radar and then they’d disappear and then reappear. On that research they built the stealth bomber.

There are light years between us and the nearest star. Do these creatures travel through linear space to get here?

Do they travel through another dimension?

They would have to. There’s a reason so much of this is kept quiet, mostly because of the mentality of the human race. How many people could honestly hold that knowledge in their head without it upsetting or confusing them? We’re just scratching the surface.

It’s been theorized that the dawn of the atomic age signaled extraterrestrial life to take interest in us. Do you agree with this?

Absolutely. That’s common knowledge. You can gauge that by the number of sightings after the war. I suppose they realized there were some little creatures on this planet that were fooling around with some dangerous stuff.

Tell me more about your time at McDonnell Douglas.

While I was there one of the guys in the department asked if I wanted to go to a rock show. It was a national convention of minerals and fossils. That introduced me to minerals. It overwhelmed my mind.

What was it about rocks and minerals that intrigued you so much?

Let me show you. Come with me.

(With the aid of his walker, Marvin leads me into the living room and turns the lights on to one of many large display cases of crystals, rocks and minerals.)

Yes they are. And that’s what hooked me. My friend and I joined the St. Louis Mineral and Gem Society where I was introduced to the beauties of nature. The more I learned, the happier I got. I later learned the thrill of digging and going into a mine and finding a beautiful rock or mineral. As the years went on in St. Louis, I began dealing in rocks and minerals, even running ads in magazines for them. I’d dig quartz in Arkansas and get fluorite from Illinois. I really got into it. From the proceeds, I bought some apartment buildings in St. Louis.

I was raising five children. During the winter months I got a job as a tool and die maker in Mays Landing, plus I was supplying the Museum of Natural History in New York and the Smithsonian with rocks and minerals. I supplied the New Jersey Museum in Trenton with educational minerals and fossils. That got me through the winter months.

After 20 years on the boardwalk I developed a wholesale route. One of my customers was Preston Shadbolt at Sunset Beach. Shad had his shell and mineral shop open from Memorial Day until Labor Day. In 1972 I went in there and he told me it was going to be his last year and asked if I wanted to buy the property. So I bought it and that’s how that came about. I still own the shops with my two daughters and my one son and his wife.

No. Who do you think does the flag ceremony every night?

Did you originate the ceremony?

Yes and no. Preston Shadbolt had an old wooden flagpole and he loved Kate Smith. In fact, he knew her personally. When I bought the place from him he asked me, “Marv, would you do me a favor? Every evening I play Kate Smith’s God Bless America and I get a kid to help take the flag down. Would you keep doing that?” So I realized that here we were, right on the beach with the southernmost flag in the state. I thought what a wonderful thing to do to honor my old friend Joe who was lost at Pearl Harbor, and my friend Walt who died on the Arizona.

I put an ad in the paper asking for a donation of a veteran’s casket flag. From then on nothing but a veteran’s casket flag has flown on that pole with one exception ‒ the battle flag of the USS Cole which saw a lot of action. The flag has shell holes in it. It’s ripped and torn. We fly that each July 4th to honor the men and women who served on it.

People sign up to fly the flag from their loved ones’ casket. We have a two-year waiting list. We turn down at least 500 people a year because there aren’t enough days in the year.

Tell me about the ceremony. Do you still play Kate Smith’s recording?

We do the ceremony a half hour before the actual sunset. I ask the people to face the flag. I tell them that the flag they see flying is from a veteran’s casket. The name and history of that veteran is read to the people. It’s very touching. I tell them to place their right hand over their heart during the playing of the National Anthem and honor this flag, this country and this veteran. Then I tell them we have our very good friend Kate Smith on hand to sing God Bless America, and she requests that everybody out there join in with her. And believe me, they’re all singing.

This ceremony, so we are told, is the only place in the United States that has done the ceremony this long. A few years ago, my friend Paul Tibbets, who was the pilot of the Enola Gay, pulled the flag down one night. I first met Paul in Florida and asked him if he would come up to Cape May. He came up, Patricia and I took him to the Lobster House. I forget what he ordered, but he said it was the best dinner he ever had. He had just written his autobiography and I told him to bring plenty of books to sell. He said he would bring seven cases and I told him it would not be enough and it wasn’t. At the ceremony, it was the largest crowd he had ever spoke to and was there for five and a half hours autographing books. Every book went. A few years later I invited him again, but he was physically unable.

Did you ever think of writing a book?

Many times. But there are things in war you see that you don’t ever want to recall.

Editor’s Note: This “The Islander” feature by Tommy Raniszewski originally ran in the Fall 2012 issue.