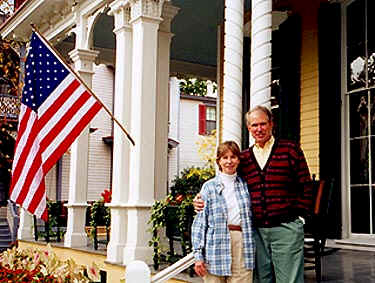 Tom Carroll has been a resident of Cape May for nearly 30 years, with 24 of those years spent as activity duty in the Coast Guard. Tom, in fact, comes from a Coast Guard family. His brother was a helicopter pilot and his father was Coast Guard auxilliary. He grew up on the water and visited Coast Guard bases and lighthouses as a child. He always loved the mission of the Coast Guard.

During his time in the Coast Guard, part of Tom’s duties included qualifying for small boat operating, search and rescue, and maintenance of the aids to navigation. He found the work rewarding.

Tom ended up in Cape May by shear accident. He had gone through Officers’ Candidate School and then on to a cutter in Yorktown, Virginia when he learned the home port was going to be changed to California. He had not seen much of his wife during the past year and was anxious to make the change, so he put in to be transferred to another place on the East Coast.

“I was referred to Cape May by the Coast Guard who told me it ‘sounded like a nice place along the ocean,’” Carroll recalls. “I had never been there before and did not know about all the Victoriana.” From their first visit, Tom and his wife thought Cape May was very interesting, though they were advised by the Coast Guard not to buy property in the area because they would never be able to resell it.

At that time, Cape May was a sleepy town of dilapidating Victorian buildings, many used as rooming houses, a predecessor to the currently booming bed and breakfast industry. They ended up renting a place from Fred Kruhner, founding member of the Mid-Atlantic Center for the Arts (MAC), a non-profit cultural organization dedicated to the preservation of Cape May’s Victorian heritage. Kruhner invited the Carrolls to join the group trying to save the Emlen Physick Estate, a grand 19th-century house earmarked by the city to be demolished.

As they became more and more involved with MAC’s mission and made friends around town, Tom moved slowly away from a career in the Coast Guard. He was on active duty, but eventually moved into the reserves, which had a unit in Cape May. He and his wife enjoy being part of the Cape May community and had an interest in the preservation of its historic buildings.

Tom and his wife bought their first property in Cape May (now The Windward House on Jackson Street) for $38,500. They went into what was then called the “rooming house business.” It was the “cheap but clean alternative to motels” with a kitchenette, the cheapest linens and just the basics. At that point the United States did not really have much of a bed and breakfast industry, certainly not as we know it today.

One year, Tom and his wife took a trip to Europe and stayed in a traditional bed and breakfast inn. Vacationing this way in Europe was so popular with Americans, the Carrolls wondered “why not bring this experience to the states?” and present it in a way that reflects the feel and history of the town they live in.

Upon returning, Tom and his wife started applying their theory to their rooming house business. At the same time, they went in search of a property that would most reflect what it was like to stay in a place like Cape May, with such a rich Victorian history. They were attracted to The Mainstay because of its grandeur and verandahs and because they felt it reflected what visiting Victoriana was all about. It took Tom and his wife three years to purchase The Mainstay, at which point, Tom’s employment with the Coast Guard had become a supplement to his job running the inn. In 1994, with the end of the cold war and the cut back in reserves, he was forced to retire. He had reached the highest obtainable position of Captain, and had been in for 24 years.

Tom’s involvement with the Coast Guard led to a project he spearedheaded with MAC long after his retirement. The Coast Guard, which maintains the nation’s lighthouses, had been spending a great deal of money keeping around the Cape May Lighthouse, which was quickly deteriorating and in need of paint and refurbishing. It was Tom’s idea that MAC, and other non-profit preservationist groups, should lease lighthouses from the Coast Guard and take care of them. In 1983, MAC took over care of the Cape May Lighthouse and turned it into a popular attraction that has been seen by over 600,000 visitors. Tom helped saved the Coast Guard thousands of dollars and also gave people another wonderful reason to come to Cape May.