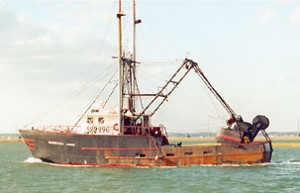 The Lobster House Dock is part of The Port of Cape May, one of three  commercial fishing docks in southern Jersey whose combined success make Cape May the second largest fishing port on the Eastern Coast of the United States.

Fishing has been a major industry in this area since the 19th century, but it is the area’s history and development that has led to the success that the fishing industry enjoys today. Cape May, or Cape Island as it was originally called, did not really begin as an island, but a soil-based part of the mainland. To this day, though one must cross  over the Cape May Canal to reach it, the area where the dock and fish packing plant are located are not a part of the City of Cape May, but rather Cold Spring, a section of Lower Township. The harbor was created in the first few years of the 20th century when the existing wetlands were dredged using hydraulic dredges and suction pumps. In 1901, 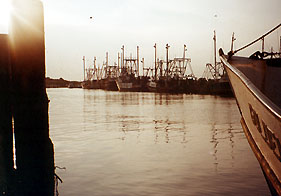 land east of the harbor was purchased for $10,000 by developers from Pittsburgh.  They filled it in with the dredged soil, with intention to turn it into another Newport, RI.  One million dollars was set aside for the Army Corps of Engineers to accomplish this project, but that turned out not to be enough. The land developers experienced huge cost overruns and eventually were bankrupted.

Due to Cape May’s strategic position at the southernmost tip of New Jersey, where the Atlantic Ocean meets the Delaware Bay, the area has historically seen a great deal of activity. There have been reports of piracy, sugar and slave smuggling, rum-running, German U-boats and drug smuggling. The Cape May Canal, connecting the Cape May Harbor with the Delaware Bay, was excavated during World War II as a way to get ships safely from the Atlantic Ocean to Philadelphia while avoiding German U-boats, which lurked off Cape May Point. Today the canal remains an active thoroughfare for recreational boaters and ferry tours. The Cold Spring Fishing Supply Company was started in 1925 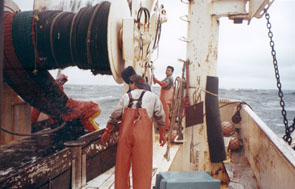 and has been owned and operated by the Laudeman family since 1936. “My grandfather came down in the 1920s,” says Keith Laudeman, third generation owner, “he was a fish dealer in Philadelphia.” The Laudemans own three of the boats docked at the wharf, all used for scalloping. A typical trip takes a crew fifty to seventy miles out to sea where they work the continental edge. They are usually gone for two weeks at a time, a typical voyage for most commercial fishermen. Other individually owned boats at the dock are used for catching squid, flounder, lobster, fluke, and round fish, such at trout.

Before a boat can set sail, a captain must go through a series of preparations, from hiring a crew to filling the tank with gas. A typical commercial fishing boat consists of a Captain, First Mate and 5-7 crew. Commercial fishermen are tough, enduring weeks at a time away from family and friends in a labor-intensive job that requires them to rise before dawn and work all day, sometimes until midnight. It is also extremely dangerous work, and is considered to be the single most dangerous industry. Every year in Cape

May County fishermen’s lives are lost.

In an effort to take every preventative measure possible, each ship is outfitted with the latest in scientific equipment, including radar, loran (long range navigational device), and the best ship to shore radio. Some boats even have fax machines, and many are hooked up by satellite. The latest high-tech fishing equipment is also on board, including a depth sounder, to sound out depth and outline contours of the ocean floor, and fish scope, to find the schools of fish. The deck of the ship is large for working, and the boat itself is designed with a seaworthy hull that provides maximum refrigerated storage space below for the catch, and minimum, but comfortable, space above for the crew. The engine is economical but powerful enough to hurry the catch back to port. Before a boat leaves port it is filled with up to 10,000 gallons of fuel, 10-15 tons of ice, and enough food and supplies for the crew for the voyage. 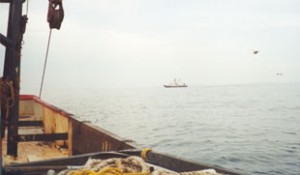 Plenty of ice is needed for a voyage to keep the catch fresh. On the dock is an icehouse which produces all the ice needed for each vessel. Once made, large tubes are used to transport the ice to the hull of each ship. Ice is also produced for use in the dock’s packinghouse, where fish is packed before being taken to distribution or processing companies, or retailers interested to sell the fish. Ice is also used for the Lobster House Restaurant, cocktail lounge and fish market. Elmer Widerstrom is captain of the Captain Buckey Smith. He is a third generation fisherman whose grandfather came from Norway. Many fishermen share a Scandinavian ancestry.

“It’s all I’ve known since I could walk.” says Widerstrom. Widerstrom and his crew fish mainly for Bunker, used for industrial purposes such as animal feed, fish meal and oil, though a small percentage is used as bait for fisherman who catch crabs, lobster, tuna and shark. For their purposes, Widerstrom and his crew use two boats and the assistance of an airplane to spot and catch the fish. The fish are located from the sky and the boats are radioed the location. One boat is used to actually catch the fish, and 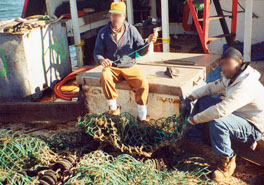 because there is so much of it, a second boat is used just to carry the catch.  The Bunker season begins in May and lasts six months. A good season may bring in as much as 10 million pounds. Strict government regulations restrict the type, amounts and length of time a certain fish can be caught. For example, fluke and lobster are harvested all year long, but flounder and trout can only be caught seasonally.

Arnie Jensen is Captain of The Courageous, a boat used for scalloping. During their time at sea, Jensen and his crew use a process called dredging to find their catch. Each side of the ship is equipped with dredges, which somewhat resemble a lady’s purse with fishing net as the fabric of the purse, connected to a clasp that shuts tight at the top.

For this process, the dredges are lowered into the water and opened, and the net is dragged across the ocean floor. When a sufficient amount has filled the net, the dredges are 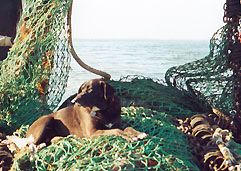 closed shut and brought back up to the boat with the catch inside. The catch is dumped onto the deck where the crew collect the shells, open them up, and take out the meat, or scallop. The scallops are separated by size and put into bags. The bags are lowered into the boat’s hull and packed in ice. When the hull of the boat is full, Mr. Jensen radios ahead to Bob Walters, Wholesale Fish Manager at the Cold Spring Fishing Company, that they are headed back to port. It is the job of Mr. Walters to find a place to buy the catch.

“He finds a place to sell it,” says Jensen, “cuz there’s no point in getting the fish off the boat if there’s no place for it to go.” Each fishing boat captain must provide Mr. Walters with information about the type of species coming in and the approximate time of arrival. When the boats dock, the fish are shoveled onto a conveyor belt, which goes into the packinghouse. Inside the packinghouse, fish are put into a whirlpool to clean them up, their heads and tails are cut off, and they go through a device that skins them. Then the fish are separated by size and species and put into a container with ice until the combined capacity reaches 55lbs. They are loaded into a truck and sent to the retail markets or distribution and processing companies, some as far away as France or Japan. 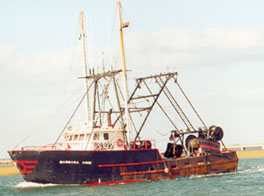 Depending on the catch and what it will be used for, some fish are suctioned right off the boats and into refrigerator trucks headed straight to their destinations. Compared to what is caught, only a very small amount is actually sold at the Lobster House fish market or in the restaurant or raw bar. In addition to selling fish caught locally, the fish market also sells imported seafood, including Salmon from Japan, halibut from Alaska and crabmeat from Louisiana.

At the end of a trip the catch is weighed and a value is determined based on the selling price per pound. Forty percent of what is caught goes to the owner of the vessel, then the costs for fuel, ice, food and repairs, fronted by the Cold Spring Fish Packing Plant prior to a trip, are paid back. With the left over money, the boat’s captain and first mate are paid, and whatever is left over is divided among the crew.

Professional fishing is obviously hard work with rewards that are often uncertain.  But it is work that’s as old as civilization and it goes on daily from Cape May’s “Fisherman’s Wharf.”

You can tour Fisherman’s Wharf and see for yourself…

“I don’t even like fish!” was Nora Dirvin’s response when she was approached to write a tour of the Cold Spring Fish Packing Plant, known to Cape May, New Jersey locals as the Lobster House Dock.  But Dirvin, a retired school teacher and veteran tour guide with the Mid-Atlantic Center for the Arts (MAC) in Cape May, agreed, and thus was born the “Fisherman’s Wharf Tour.”  Twelve years later, the tour continues to bring in locals and 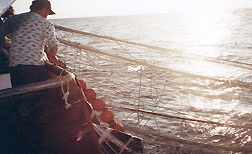 visitors, and has seen tour groups as large as 140 people.

The tour begins at the edge of Cape May Harbor, where the dock, sometimes three-deep in commercial fishing boats, is often alive with activity as fishermen unload their catch or prepare their boats for the next journey.

At the end of each Fisherman’s Wharf Tour, visitors are invited to explore the dock and stroll through the fish market.  Visitors are also encouraged not to miss the 37 _ lb. Lobster displayed in the entryway to the Lobster House Restaurant, a surprise catch by Arne Jensen during a routine fishing trip in July of 1985.

After serving for twelve years as tour guide, Nora Dirvin has retired. She is no longer comfortable maneuvering the dock’s misaligned planks, fishing nets and icehouse hoses, and feels the time has come for her to give somebody else the responsibility of telling the fisherman’s story.

Over the years Nora had become a familiar face to the dock’s rough and weathered men. She has weathered a bit herself, but knows it has all been a part of the fun. “People come and look at me and think ‘what does she know about fishing?’ says Dirvin. “I look at them and say, ‘I wrote it!'”

A guided tour of the Fisherman’s Wharf at the Lobster House. Learn how your seafood gets from the sea to your table and discover how Cape May has become the 2nd largest commercial fishing port on the East Coast. Tour lasts approximately 45 minutes.

The tour is available to Cape May visitors on Saturdays and Tuesdays, June through August at 11am, Lobster House Dock, Cape May; Tickets sold here 15 minutes before tour begins: $6 for adults; $3 for children 3-12

Tags: commercial fishing, Fisherman's Wharf, fishing, The Lobster House, This is Cape May