I heard a rumor that this is the 10th anniversary of Cape May’s “Haunted Ghost Tour.” So, I decided to take the tour again and give our friend and co-founder Al Rauber a call, or in this case an e-mail. Well, technically it’s their 10th anniversary but the real 10th anniversary is next year and… You know, let Al explain:

Al Rauber is an investigator of paranormal phenomena. His partner in the tour business is ghost historian Diane Bixler who also owns Boo-Tique, a cute little gift shop located in the lower portion of the Macomber Hotel, which is also where you can go to purchase ghost tour tickets.

Now back to the 10th anniversary thing. Here’s Al,

“…we are going to do an unofficial 10th anniversary. You see, I did a couple of tours 10 years ago but we really didn’t start the business up until the following year. So technically, it has been 10 years of my doing tours; but from our business end, it has only been 9 and next year will be the real 10th year anniversary.”

Whew! Glad we straightened that out.

It’s been a couple of years since I took the Haunted Cape May Tour and guess what? My tour guide is the same person I had in October of 2002 – Desiree.

It is dusk and just beginning to cool. A quiet has settled along the beachfront on this Sunday evening in late September. The throngs of tourists have disappeared but there are still a nice number of people walking about. Halloween and November often suggest an image of a “ghost town” in Cape May. We don’t so much have tumbleweeds rolling down empty streets; it’s more like occasional sand traps brought about by heavy winds whistling long into the night.

Desiree is much more sensitive to ghostly apparitions bothering the tour participants than she was two years ago. She asks the 20 or so people on the tour where they are staying so that she can make a point of discreetly avoiding that hotel or that particular room when the talk of ghosts commences.

As we gather ‘round her, the ocean serves as Desiree’s background and she begins her tales.

Her first is about Captain Kidd…

It seems Edward Teach, AKA, Blackbeard and William Kidd; AKA, Captain Kidd came through Cape May on their travels. Captain Kidd found employment as an English Privateer who found such success in New York and the West Indies that he was called back to serve England. The King’s officers asked Kidd to captain a new powerful ship: the Adventure Galley. The Adventure Galley was equipped with 34 cannons and a crew of 80. Its mission was to capture all French ships, and the pirates of Madagascar. Kidd accepted the proposition. The problem is Kidd decided to man his boat with actual pirates and they didn’t buy into the notion that they could only hold up French ships. They wanted to loot everybody with equal disdain for all. In an attempted mutiny, Kidd ended up killing his first mate.

It would appear that the killing of the first mate turned Kidd into a pirate of the worst sort – or perhaps the best depending on your perspective. Captain Kidd proceeded to plunder all the ships especially the ones from England. When he decided to try and make his way make into the fold – that would be the king of England’s fold, he dropped half of his crew off in Cape May and told them to “blend in.” Supposedly, he also buried half of his treasure in Lake Lily. This, then, would be the local angle.

Well, blending in didn’t work so well for Captain Kidd. The governor of New York dropped the dime on him and he ended up in a London prison being hung by the neck until dead. If this weren’t enough punishment, the king ordered Kidd’s dead body be tarred and feathered and dumped in the Thames as a lesson to future pirates.

No one has yet to find the lost treasure of Captain Kidd, or at least they’re not telling if they did. Lord knows people haven’t given up searching. I heard some locals were still searching for buried treasure this past winter when the dredging of Lake Lily got underway.

Whew! Never knew so much about pirates.

Ah no. We’re not done yet. Blackbeard’s first mate was supposedly Israel Hand (an old Cape May name). I think Hand was sent to Cape May to protect Blackbeard’s treasure map. I could be wrong though, because at this point, I’m getting my pirates mixed up and we’re moving on to Tale #2.

Leave me alone. I can’t write that fast. Especially in the dark.

Desiree informs us that Jackson is the most haunted street in Cape May. She knows this because Al documents all hauntings and doesn’t include them on the tour until they have been thoroughly researched.

Eight houses on Jackson are said to be haunted but only four want that fact known. The four are: The Merry Widow, the Inn at 22 Jackson, the Windward and the Saltwood.

The story goes something like this. The innkeeper at 22 Jackson, ca. 1899, opens her door to find a distinguished looking gentleman on the porch. He tells her that he used to live in the house and as a boy played on Jackson Street. While she’s talking to him, she notices that the temperature in the foyer drops suddenly. The man then asks the innkeeper if the house is haunted and if she has met Esmerelda. The woman brushes him off with a curt no and shuts the door. Then, she realizes she should at least get his name. She immediately opens the door, steps out onto the porch but the man is gone without a trace.

Two weeks later a tenant on the first floor asks the innkeeper if the house is haunted. “No.” she says indignantly. But she gets to thinkin’. She can’t stand it anymore and marches up to the third floor – The Turret –the cone-shaped section on top of the roof – and asks the tenant who had been staying there for a while, “Have you seen any ghosts lately,” or something like that.

“Just the woman sitting at the end of the bed,” she says nonchalantly. 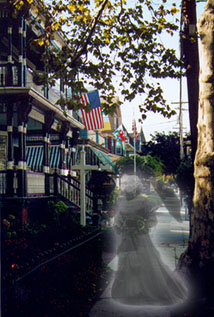 (Just to be clear, we enhanced this image for fun. We haven't caught any ghosts on film yet.)

In October when the inn closed, her curiosity got the best of her. She marches back up to The Turret and is overpowered by the sense of someone in the room with her. She rushes out the room and doesn’t come back for two days. When she does go back, she moves the bed against the wall and finds a small door. Turns out the door was a laundry shoot which ran from the third floor to the first floor. The innkeeper also found out that “way back when” the original owners of the house employed a nanny by the name of Esmerelda.

Desiree is very protective of us and cautions to stop walking in the middle of the street and not to lean against the wrought iron fences along Jackson. Not only could that be hazardous to your health, the innkeepers don’t like it very much. So off we go. Next stop Winterwood Gift Shop on the Washington Street Mall. Desiree also cautions us that the alley way between Winterwood and Gifts Galore, or Draper Walk, has been the sight of a few frights of it’s own.

It seems that on at least two occasions, a woman (why do these things only happen to women?) who was leaning against a stone memorial dedicated to one Edgar Arthur Draper, 1886-1956, a Cape May physician for 40 years, experienced the sensation of her hair being pulled away from her neck. She might have felt a kiss on the back of her neck or I might be making that up. I love a romantic ending. 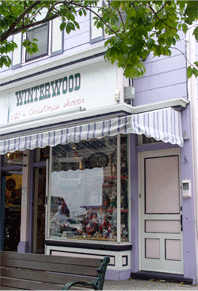 I remember this one from my last tour. Winterwood is the former site of Keltie’s Newsstand. At one time the Knerr sisters who operated a millinery store also owned the building. After the Knerr sisters a dentist occupied the building. Desiree relates two stories shared by the owners of Keltie’s. The first involves a “residual haunting” in which a man in a lab coat was seen coming toward the proprietor with something in his hand. As he drew near to the woman, he disappeared. It was the same experience every time without deviation.

This is an example of a residual haunting which according to ghost writer and medium Craig McManus is defined as thus: “Energy embedded in the either of the place. The energy creates a movie that plays over and over again in the either.”

The second story associated with 518 Washington Street is an example, Desiree says, of a “true haunting.” This involves the Knerr sisters and was also related by the former owners of Keltie’s but confirmed by the present owners as well. It would appear the Knerr sisters were a bit mischievous and could be heard giggling throughout the building. Then one day, they decided to take their mischief a step further and pushed one book, then two, then three, etc. etc. off the shelves. This happened more than once and the finally one day the proprietor got fed up with them and told them straight out to knock it off. And guess what? They did.

However, Desiree claims things still go bump in the night every once and while when the staff at Winterwood opens up the next morning and Christmas decorations are thrown about the place that were clearly on the shelf the at closing time. 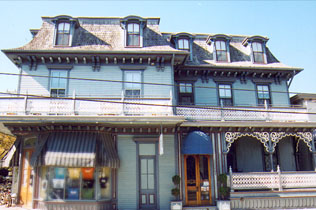 We are now in front of the Queen’s Hotel, ca. 1876 at the corner of Columbia Avenue and Ocean Street. The Great Fire of 1878 stopped just short of this Grande dame then an apothecary, Ware’s Pharmacy. Although Ware’s Pharmacy survived the fire it still suffered damage and underwent a redo in 1879. Ware’s, according to Desiree and most historical accounts, also doubled as a speakeasy, gambling house and brothel.

The ghost of the Queen’s Hotel apparently was a “working girl” in her former life and likes to haunt – yes, by now you should have guessed – the third floor. Reports of the scent of perfume have been reported, cold spots in the rooms and occasionally a woman nudging past one of the guests, usually a woman. The ghost of Queen’s Hotel is a little on the jealous side. Desiree suggests leaving a buck or two on the nightstand so she feels appreciated. She being the ghost not Desiree.

Desiree concludes this tour by sharing with us a few details about the Macomber. Most commonly requested room? Room #10. Even Al Rauber stays in that room once in a while. But don’t be disappointed rooms 19, 29, 41, and 51 are said to be afflicted with shaking bed syndrome. So, there’s something for everyone.

Our virtual ghost tour being over, we strongly recommend that you take the real one!

Tags: ghosts, haunted houses, on assignment, paranormal, This is Cape May