Text by Bill Godfrey. Photographs by Stephen Spagnuola. Originally published in the Spring 2007 issue of Cape May Magazine. 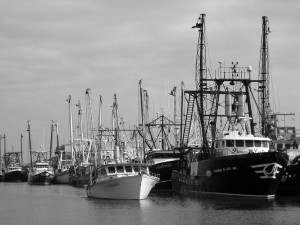 It was a crisp January morning in Cape May. A bitter wind howled out of the north, burst pipes were flooding local businesses and the ice was thick on the bay and the ocean. I stepped out of my car in the parking lot of Lund’s Fisheries on Ocean Drive in Lower Township and grimaced as the wind slapped my face.

I was here to peek into the world of commercial fishermen, “harvesters” they sometimes call themselves (– “Enjoy seafood?” asks a common bumper sticker, “thank a harvester.”) The perpetual winter gale stood me upright and the piercing fish smell on the docks assaulted my uninitiated nose and pried my eyes open like, well, like another slap in the face. I’d made arrangements to meet Stephen Spagnuola, a local guy who spends a lot of time on the water and has crewed on commercial boats. But Stephen hadn’t arrived, so, not being one to wait for an escort, I walked toward the docks. 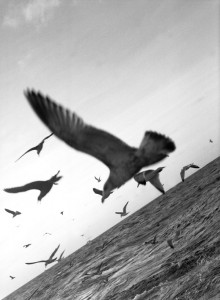 Seagulls over the water

The seagulls were thick like a Hitchcock movie. One landed a few yards in front of me and fought off several pilferers before gulping down a fish twice the size of his mouth. He managed a mean stare in my direction before taking off. I passed a tough-looking gent in a black rimless leather hat (he didn’t look like a fisherman to me), stepped over ropes, hoses, pallets and assorted fish gear and found myself on a slippery wooden dock staring at a dozen or so commercial fishing rigs including the 120-foot Laura McCausley out of Portsmouth, NH, her hull and rails thick with ice. Crewmen onboard passed words and cigarettes to a man in work overalls on the dock. They looked at me funny.

I caught up with Frank Carroll, a crewman from the Cape May boat Starbrite. He was checking on the boat to ensure the pipes weren’t bursting from the cold – Starbrite wasn’t going out anytime soon, the weather was too rough. As Carroll stood in front of Starbrite with the sun at his back he looked right out of central casting: Carhartt jacket, weathered face, big smile, broad shoulders. I shook Carroll’s sandpaper hand and admitted I knew next to nothing about commercial fishing.

“How could you unless you do it,” he asked. 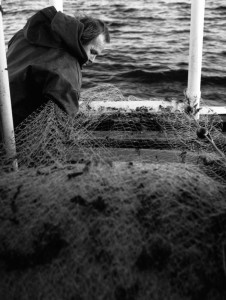 Captain Charlie Esher aboard “The Kidd”

Two centuries before Cape May became popular as a seaside resort, fishing was the lifeblood of the community. Whalers were among the first to arrive, and today Cape May is fifth in the nation for commercial fishery landings as ranked by dollars ($68 million in 2004, the most recent year available from the National Oceanic and Atmospheric Administration) and 13th for total pounds of fish landed (98 million). Tourism may be the golden goose but commercial fishing is still the backbone of the local economy in Cape May.

And the dollars that flow from commercial fishing feed many mouths. 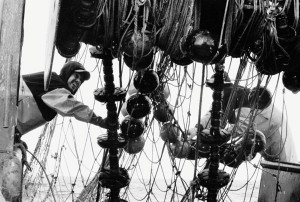 A crew member aboard the “Golden Nugget”

“It’s sad they don’t get the respect they’re entitled to,” said Kim. “When people think of commercial fishermen they think of a big, fat, ugly guy with no teeth. But these guys provide food for the world. They work through the night in the dark and often don’t sleep for days. It’s a rough profession and there are a lot of rules and regulations. It’s very dangerous, one little thing can kill you.”

One group that doesn’t overlook commercial fishermen is the federal government, which keeps a close eye on every move these guys make. Commercial boats are required to purchase, at their own expense, tens of thousands of dollars worth of gear that makes it easier for the feds to keep an eye on them. Some welcome the federal regulations, arguing that it preserves fish stocks. Others decry them as destroying their livelihoods. Many are caught somewhere in between. 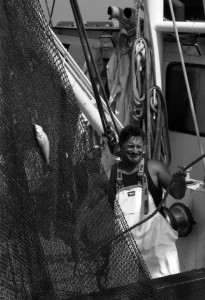 I met Stephen Spagnuola at the Cape May Film Festival in 2003. He had a thick portfolio of photographs featuring commercial fishermen. Since then he’s committed much time and energy to ensuring that the story of Cape May’s commercial fishermen gets told. He interviewed dozens of local fishermen to get their stories and took photos that he hopes captures the spirit of these men, their families and their way of life.

What I discovered during the journey was a way of life that harkens back to a different time. Fishermen are sometimes out for weeks at a time. Their lives revolve around factors they can’t control, mostly the weather. “If you haven’t worked in awhile,” said Kim, “and the weather breaks, you’ve got to go out – family weddings, babies, birthdays, reunions, whatever – you’ve got to go out.” 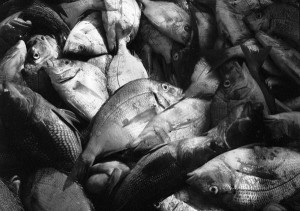 “My dad’s not a 9 to 5 guy,” adds Christina Walker, Ron’s twenty-something daughter. “I used to stand by the door and wave to him. Then I wouldn’t see him for two weeks. He was gone a lot but it didn’t bother me, I didn’t cry about it. But if he was in he was always there.”

The reasons that men go out onto the dark ocean are varied and personal and apparently too strong to resist. This is the reason Stephen Spagnuola is relentless about documenting their stories. He sees these guys as the cowboys of the East. Icons that represent all that’s best about Cape May and their romantic, misunderstood way of life – industrious, fiercely independent, upright and hard working. 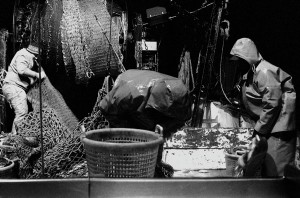 Crew of the “Golden Nuggett” working in the cold air on deck.

Christina told me her dad had recently returned from a “bunker” trip. Bunker, or menhaden, is used mostly for cosmetics and other fish oil products; it’s not really edible. “There’s no eating bunker, it’s the smelliest fish in the world,” she said. Squid, better known as calamari in local restaurants, was the next trip. Commercial fishermen go out for bunker, porgies, mackerel, scallops, fluke, clams and more. Much of Cape May’s fish landings are sold overseas where the market for fish is stronger than in the states.

Some worry about the future of Cape May’s commercial fishermen. Some don’t. Rich Hill thinks it may be a fading industry.

“I worked all my life to get my own boat. I got a grandson coming up and all he wants to do is go fishing. I try to discourage him because the next few years I don’t think it’s gonna be there for us.” 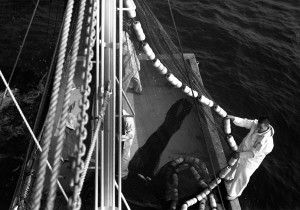 Andrew Walker packs the net back on board the “Constantino L.”

As for the feds, well, Rich has an opinion on that too. Commercial rigs are often boarded by the Coast Guard looking for safety violations, proper paperwork, permits, illegal harvests and who knows what else. “Every time I turn around we got more rules and regulations and ground closures,” said Rich. “I can’t see why we need all these rules and regulations. Mesh size – that will regulate itself. Stuff is out there and it’s gotta be caught.”

Observers sometimes accompany commercial boats when they go out. Kim Walker told me if her husband is out on a mackerel trip and lands a flounder, he better not bring it home for supper or he could end up in a lot of trouble. “Rules and regulations are another stress factor. It’s a mountain of paperwork every month.” 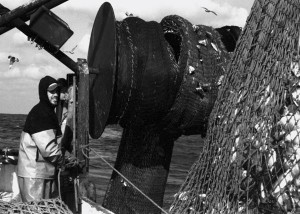 Crew member aboard “Golden Nugget” with a full bag of porgies and sea bass after a tow.

Dan Cohen, principal owner of Atlantic Cape Fisheries is from fisherman stock. Like a lot of fishermen’s sons, he thought he could steer a course away from commercial fishing. He was wrong. He sees a change in today’s commercial fishermen.

“The last 30 years have been significant. Psychological change has occurred among commercial fishermen who previous to regulation were hunters. Since management we have become more interested in the long-term sustainability of the resource. We’re now viewing this much more as husbandry, or stewardship, or farming.”

For the Walkers, fishing is a family thing passed down through generations. Darren Walker, 17, is the fifth generation of Walker men to go fishing, and both his parents and grandparents wish he would choose another career path. 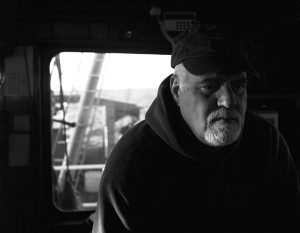 On board the “Mary Anne.”

“I never wanted my sons to be fishermen and I don’t want my grandson to do it. We’ve lost two boats so far and we might not be so lucky the third time,” said Marie.

“Ronnie got stuck by a stingray one time,” added Kim. “It was in the net and got him on deck. They had to operate on him right there. They used a razor blade. Then there’s the occasional steamer that appears out of nowhere in the night and doesn’t see you on its radar. It could run right over you. There are so many factors. Ask Ronnie about the time the boat sank from under him. That story still sends chills up my spine. I went out many years ago. I remember that feeling when I couldn’t see land. It was very strange. I couldn’t do it.” 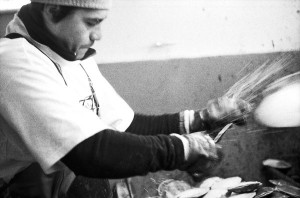 Ronnie Walker was aboard Stardust when it went down off Cape May in 1992. He took up roofing for a bit but has since returned to the sea. Many just can’t resist the siren’s song. “[After the boat sank] I bought a small conch boat and I was conchin’ inshore on a small pot boat for a year and a half, but I decided to go back. It was scary but that’s what I did all my life. I ended up going back,” he said.

In spite of the danger, the odd and unpredictable working hours, the maddening and sometimes contradictory federal regulations, the time away from family and the other innumerable reasons to avoid the commercial fishing industry, it seems some are drawn to it for reasons too strong to ignore.

“I tried to get away from it a couple times,” said Rich Hill, owner of the Tina Lynn, who’s been commercial fishing out of Cape May since the 1960s, “but once you get the water in your veins you always end up back in the water again. It’s all I know. It’s a good life if people leave us alone.” 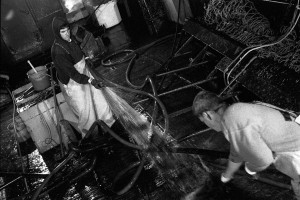 Crew of the “Mary Anne”

“I started in 1954, that’s over 50 years in Cape May,” said Harry Axelsson who, like his father and grandfather, earned a living from the sea. Harry came from Sweden in 1954 and found a home in Cape May. “America has been good to me. I don’t regret any of it. I’ve got nothing but good to say about people and this country and everything. 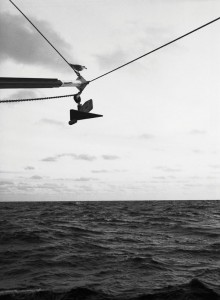 A gull perches on the “Mary Anne”

“[When I started out] there was Italians, Norwegians, Swedes, Finns – It was a mix. They were all nice people and gave you straight answers. We always helped each other when something happened out there, you know? Most of them guys, they would have given their arms to help you out. If you tore a net they came around and helped you to fix it. They never charged nothin’ they just came and helped you out. But there was competition when you was out there. That was fine. Nobody had any problems with that. I enjoyed that.”

Harry’s ships are probably the most visible in Cape May Harbor, the Flicka and Dyrsten. Both are red (Harry’s favorite color is blue but red “shows up good on the water”) and are docked near the Middle Thorofare bridge.

“I thank God everyday for the ability to make a living from the sea.”

About the Photographer
Stephen Spagnuola, a graduate of Visual Arts, New York City, worked as art director for many ad agencies in New York before leaving advertising to pursue fashion photography, and worked on such magazines as Stuff, Flatiron, and Zink. Stephen is a freelance photographer and marketing director for Sea Tow Cape May. Visit Steve online

Tags: Cape May Icons, Cape May Magazine, commercial fishing, fishing, people, This is Cape May